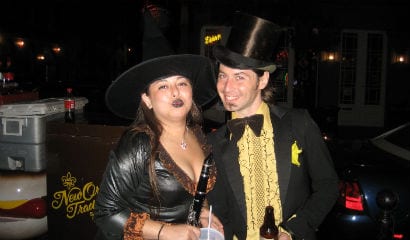 The scariest thing about Halloween isn’t the goblins, those kids egging your house, or biting down on a sharp surprise in a Special Dark. It’s adults who impersonate children.

Halloween, a holiday for children, has transformed into an unholy day for adults; its focus has shifted from gustatory appetites to sexual ones. It doesn’t take a warlock to see that this is frightening.

Popular costumes this year include Miley Cyrus’s mouse leotard, theHunger Games huntress, and, long after its sell-by date, variations on the 50 Shades of Grey theme, which is a long way of saying that by far the most popular costume this year, and indeed for at least 10 years running, is “whore.”

Aside from the creepy, almost pedophilic combination of the obscene and the preteen—best demonstrated by the Miley Cyrus schizophrenic sexed-out Chuck E. Cheese body-suit costume—the adults co-opting Halloween exhibit cognitive dissonance. They obsess over sex but exhibit a profound annoyance over its bounty. Their compulsion to copulate is matched only by their homicidal drive to forestall the result of copulation. Adults stuck in adolescence can’t stand to be upstaged by the genuine article.

So elders in charge of the other 364 nights reclaim this one for their selfish selves. They won’t be answering the door even if you can see them moving around with the lights out—they’re too busy getting gussied up for the big night to be troubled with handing out miniature Clark bars.

This grown-up encroachment upon what is supposed to be a kids’ night is perfectly in keeping with the times. Parents, slaves to their own childish phobias, have put childhood on lockdown. Parentally-monitored indoor “play dates,” kids armored up for bicycle rides like Evel Knieval jumping the Grand Canyon, and medication for any kid who dares to act too much like a kid all exemplify the ways adults have party-crashed childhood. Do they have to ruin Halloween too?

Even when authority figures urge restraint, they get it wrong. “Please keep in mind that certain Halloween costumes inappropriately perpetuate racial, cultural, and gender stereotypes,” a thought policeman employed by the University of Colorado recently informed students. He warned about classist “white trash/hillbilly” or “ghetto” get-ups, and “oversexualized” geisha or squaw costumes that might offend others’ cultural sensibilities. Surely Duck Dynasty’s hirsute Uncle Si would rather see you dressed up like him than wearing the costume of a deracinated, ethnically-sensitive prostitute.

A world that crowds out childhood paradoxically doesn’t leave much room for grownups, either. For guys, bros, dudes—alas, never men—we see this in marathon Xbox sessions, marijuana-induced escapism, and the replacement of real relationships with internet pornography. Less overt, and far less commented upon, are the ways in which females prolong adolescence. Abortion, a disproportionate reliance on such sugar daddies as WIC and EBT, which support them as their parents once did, and other, less consequential behaviors—shopping addictions, reading pathetic romance novels, and celebrity obsessions that resemble nothing so much as high-school gossip about the popular kids—all demonstrate a troubling aversion to accountability, maturity, and responsibility. While the sexes may differ in their approaches to staying forever young, both are jealous guardians of their right to take a pass on that most imporant passage rite: marriage.

A society with fewer children than ever paradoxically displays greater immaturity than at any point in its history. When we don’t allow kids to be kids, they will inevitably behave as kids when they’re old enough to make their own decisions. Restricted childhood necessarily leads to unrestrained adulthood.

The presence of young ones forces adults to act their age, while their absence of kids enables the chronologically mature to remain behaviorally immature. Kids see fewer kids on their street; grownups see fewer grownups.

America is a masquerade in which we expect children to act as adults and enable adults to act as children. Watching two parades on the same night, one of parents chauffeuring candy-craving tots under watchful guard from house to house in their own neighborhoods, another of French maids and twentysomething Catholic school girls hopping from bar to bar, reminds us of the degree to which Halloween unmasks something scary in us.