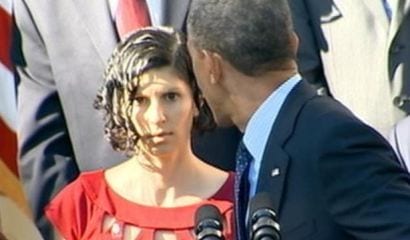 The President is cooperating. He’s providing names to Enemy Central. In his Rose Garden remarks on October 21, he mentioned at least three persons of interest, all of whom were in his custody and, unlike a fourth person in similar position, Ms. Karmel Allison, did not immediately fall ill to the contagions he or his teleprompter was spreading. Theirs turn out to be names are as artsy as, if less syrupy than, Ms. Allison’s. They are Jasmine Jennings, Jessica Ugalde, and Ezra Salop (unless that’s a misspelling of Alsop, which would make our friend Ezra the scion of a most distinguished Georgetown family, prime Obamacare material). The reason for their fame? As the President announced: “they’ve been able to stay on their parents’ plans until they’re 26.” Wow.

How lucky can some people be? Can you imagine? They’re set for life. They might as well retire, but only after they’ve been honored at the Kennedy Center. Who says achievement in America is dead? Remember that chick frozen in time on some Grecian Urn? That’s what we have here. Jasmine, Jessica, and Ezra, destined forever to remain 26. Forever on their parents’ plans, forever covered, forever piping songs forever new, forever freed from ever having to turn 27. All thanks to Obamacare’s Hindenburg computer, which takes whatever data is fed it and freezes it for all eternity, pompeistically. Who are these coming to the sacrifice? Now we know.

Of course, there is a small problem in that the parents might get older and sicker and perhaps depart from this earth. (“Best laid plans” take on poignant meaning in Obamaland.) Where will this tragic progression leave those officially still stuck on 26? Good thing we haven’t heard much lately about tort reform. And the President also emphasized the special commitment he has made to strengthening ADHD coverage for our children. Thanks to Obamacare, according to one of his single-mother informants, monthly meds for that condition have declined from $250 to $169. At this affordable rate, we can assume all those 26 and younger will spend the rest of their emptied lives in a Ritalin-certified stupor. Thanks to the magic of preventive medicine, they won’t know that they’re not getting older and may not even notice that their parents have died and gone to post-Obama heaven.

If we may nitpick, we do worry about the President’s credibility in a few tiny areas. For instance, just minutes ago we called 1-800-318-2596, which may not have worked when he first announced it, but that’s only because people weren’t calling from a payphone and didn’t have the right change to drop into the slots. We also understand that this 1-800 number is a code word for a common obscene gesture. Regardless, what caught our eye was the President’s promise that if we had questions about his health plan, a call to that number would allow them to be “answered by real people, 24 hours a day, in 150 different languages.” So we called and a recorded voice answered in English, and gave us a Spanish option as well. Gracias! Alas, we’re still on hold, running out of coins and unable to detect anyone saying even “boo” in any of the remaining 148 languages.

There are those, we admit, who’ve had a somewhat different experience. One of the great benefits of the Obamacare enrollment system is that it requires an applicant to divulge reams of personal data. He proceeds to enter all sorts of sensitive information, including name, street, apartment number (if applicable), city, state, and zipcode, then clicks submit, and — presto —Healthcare.gov refuses to accept any of it. Instead of wanting to swallow everything about you it pretends you don’t exist. Sorry, Grover, but what we have here is the Leave You Alone Coalition. If the NSA had followed Obamacare Central’s lead, we wouldn’t be on the verge of another war with Germany. Just to be on the safe side, we’re recommending no vacation cruises on the Lusitania until further notice.

And who knows when that will come. To cheer ourselves up, we reread all the “applause” lines from Dr. Obama’s remarks, as so designated on the transcript available at WhiteHouse.gov. Others were labeled “laughter.” In one case there was a symbiosis, i.e., “Laughter and applause.” We won’t repeat the lines here — they lose much in transplantation. But we will note that not one of Dr. O’s mentions of “marketplaces” invoked laughter. Nor was there any “applause” when he read from a letter of one happy Obamacarrier named John Mier — yes, the same John Mier who resides in Leetsdale, Pennsylvania. He and the missus are now covered less expensively, and in his brimming new health he predicts “the website will work like a champ.”

A word well chosen. Frankly, we wish our caregiver-in-chief weren’t the champion champ and chump of this weekly beauty pageant. We’re tired of it and you must be too. Is there anyone out there who might launch a movement to defund Enemy Central? Let’s not have to wait until the next election.