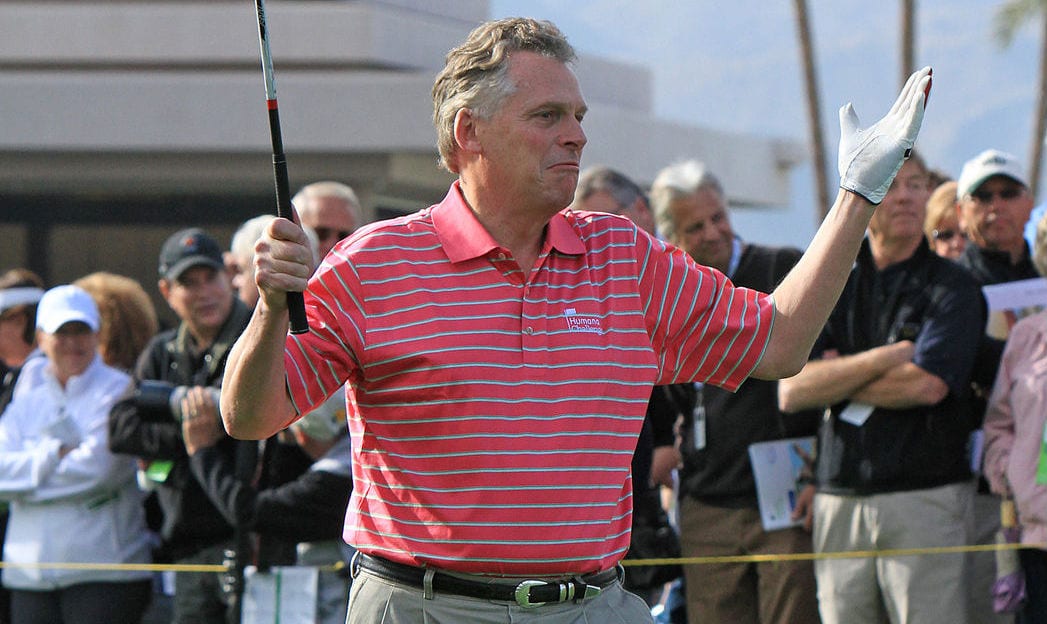 Ken Cuccinelli, Republican candidate for Governor in Virginia, has done the arithmetic and, as reported by Fred Kunkle of the Washington Post, says that his Democratic opponent, Terry McAuliffe, has made campaign promises totaling $14 billion in spending over four years, the length of a Virginia governor’s term of office. If the self-described Party Animal (the Democratic Party, that is) follows through on his promises, that would necessitate a tax increase of $1,700.00 on a typical family of four.

Back in July I had suggested that McAuliffe was careening, out of control, on spending:

McAuliffe may have a harder time practicing his Pavlovian Democratic politics in Virginia given the inability to practice deficit spending there like they do in Washington. He claims to be fiscally responsible while supporting almost any kind of spending program to solve every problem under the sun. I hope somebody in the Cuccinelli campaign is keeping a running tally of Terry’s promises and putting dollar figures next to them.

I am pleased that the Cuccinelli campaign has done this. But it is disturbing that the mainstream media, the Fourth Estate, did not do its job and connect the dots on what was an evolving story of magical liberalism in the platform of Terry McAuliffe.

Cuccinelli’s calculations are based on sources such as Chmura Analytics, an economic forecasting firm, and the left-of-center Commonwealth Institute for Fiscal Analysis, a Richmond think tank.

Certainly, Cuccinelli made assumptions that tend to maximize the costs of McAuliffe’s promises while minimizing any potential new revenue sources. Hey, that’s politics. But McAuliffe’s studied indifference to specific dollar amounts in his proposals justifies making such assumptions. Moreover, even if you apply a discount rate, say, of a third to the GOP candidate’s analysis, the McAuliffe numbers are staggering especially when you consider that the Commonwealth is a relatively low-tax state and conservatively, which is to say successfully, managed. In other words, there is the proverbial snow ball’s chance in hell the Virginia legislature would approve tax increases in the range of $1,700 or even $1,000 per family. Not gonna happen. McAuliffe knows this, I am sure. Hence, his campaign is a concoction of joy juice designed to pander to every constituency with a wish list for state spending. There is no strategic vision in the McAuliffe platform, just a string of pearls — spending proposals — driven entirely by politics rather than a realistic vision for Virginia’s future.

David Sherfinski of the Washington Times reported that McAuliffe would pay for his priorities through “unspecified government efficiencies and a projected $500 million boon from expanding Virginia’s Medicaid program,” a part of Obamacare. Cuccinelli counters, noting that the General Assembly has required that savings from the program will be returned to the health care and that new revenue from the expansion, already opposed by many GOP legislators given the fragility of federal funding, “would amount to a fraction of Mr. McAuliffe’s projections, about $50 million to $60 million per year.” Does McAuliffe care? Let’s face it: It is much more fun to fabricate the GOP “war on women” than to speak to the actual responsibilities of governor and chief executive of the state.

Looking around the country, where Republican governors govern, states are well-managed. Consider the turnarounds in New Jersey, Michigan, Wisconsin, Ohio, and the ongoing success of Texas. On the other hand, Illinois and California are poster children for mismanagement.

Terry McAuliffe would make a great governor for Illinois. But Virginia?