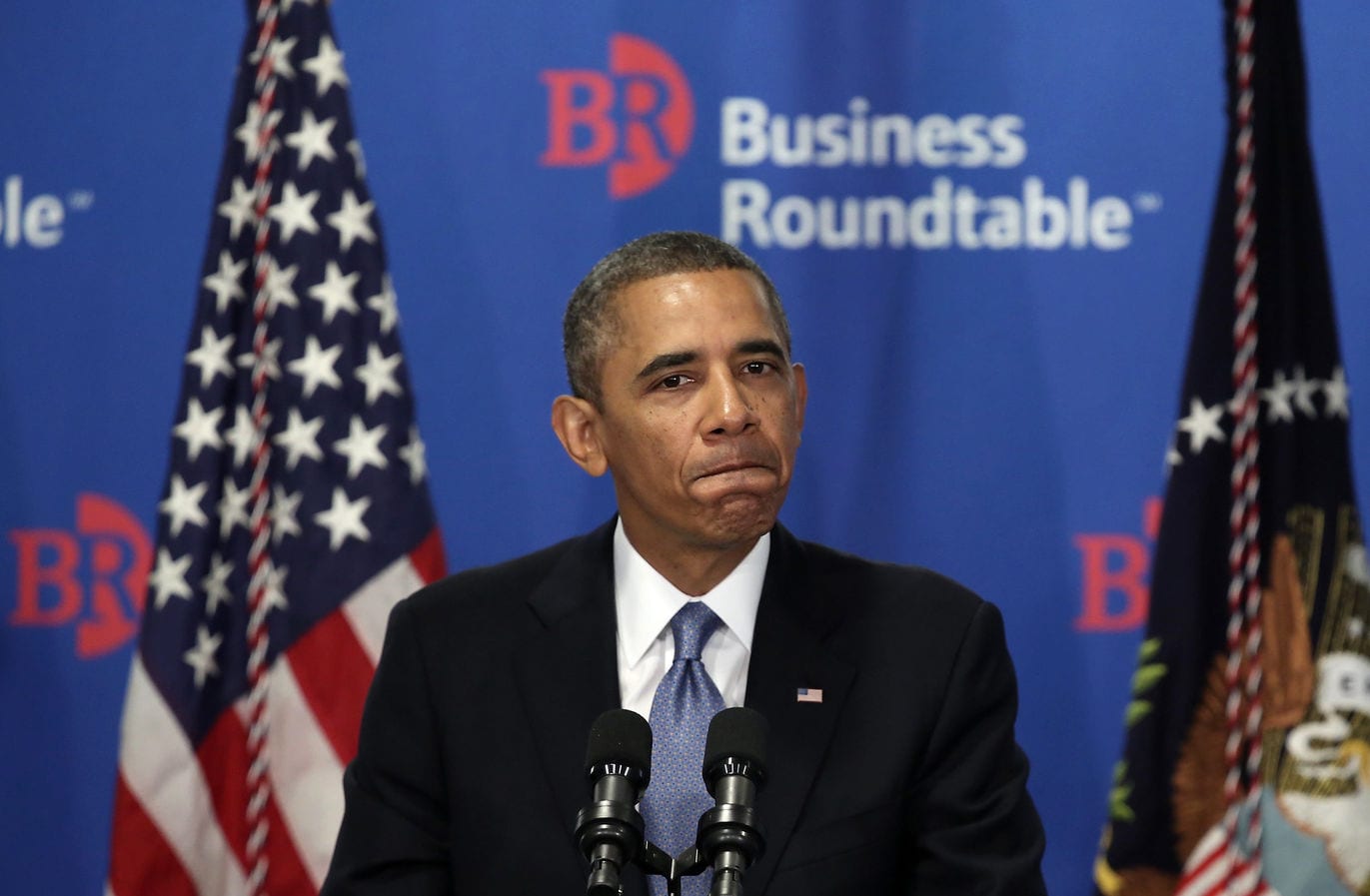 Before October 1, one of the highlights of my family’s week was the “C’mon, Man!” segment of Monday Night Football. The blown plays, missed calls by blind refs, and part-time stupidity of some football players is always a hoot to watch. Since then if we want a few laughs, we just turn on the news.

Nothing the NFL — or, for that matter, college or high school players — can do compares with what’s going on in the White House and Congress on the government shutdown and the debt ceiling.

But now it’s time to stop laughing. This week, the U.S. Treasury says it’s going to run out of creative accounting methods that have enabled it to continue borrowing — mostly from itself — since the beginning of the month. And when it does, it’ll no longer be able to pay the nation’s debts.

To recap the few facts you need to know, Treasury Secretary Lew says the government will be unable to borrow money after Thursday of this week. A few days ago, Speaker Boehner offered a deal to the president where the House would pass a “clean” government reopening appropriations bill and a debt ceiling increase covering the next six weeks (i.e., ones that didn’t have any provisions cutting Obamacare or anything else resembling a cut in government spending) on the condition that the White House meet and try to negotiate a bigger deal within the six-week period.

That is the kind of “if-then” deal I’ve been warning against since before the Budget Control Act was passed. But Obama rejected even that.

He believes he’s invulnerable: that if he precipitates a default on America’s debts, he’ll be in a position to blame Republicans for it.

Sen. Susan Collins, a liberal Maine senator, offered a six-point package that would have reopened the government on last year’s spending levels, extended the debt ceiling’s limits to cover six months of government spending, and made a few teeny cuts in Obamacare (such as delaying the tax on medical equipment that will be imposed in January). Harry Reid rejected that.

According to uber-liberal Sen. Dick Durbin of Illinois, Reid’s rejection was based on something not on the table before: the end of the spending cuts imposed by the Budget Control Act of 2011 known as “sequestration.” In plain terms, Reid wants to increase federal spending in each of the next eight years by about $950 billion, the amount that will otherwise be cut from the budget by sequestration.

If you look at it from the other end of the telescope, Reid is insisting that federal spending of $962 billion next year isn’t enough. He’s dead set on increasing federal spending. So is Obama.

The media coverage has been unremittingly negative to Republicans and positive to the Democrats. The media all but refuses to cover President Obama’s contumacious refusal to negotiate anything with the Republicans. They report it only as a footnote to whatever offer he’s most recently rejected. The only coverage is focused on how leaderless, divided, and unpopular the Republicans are. No other thought is permissible, far less debated.

The effectiveness of that “reporting” is reflected in the polls which show the Republicans generally — and people such as Sens. Ted Cruz and Mike Lee — supposedly losing more and more ground as the government shutdown continues.

But what the polls are reporting is much more complicated than that. It’s not only the Republicans who are losing ground. Much more important is the ground and credibility Obama and his administration are losing.

The latest NBC News/Wall Street Journal poll, covering the period October 7-9, said that 78 percent of Americans said that the country was going in the wrong direction. Forty-eight percent disapproved of the job that Obama is doing, and his “very positive” and “very negative” ratings were 26 percent and 30 percent. The Republicans, to be sure, were doing a lot worse. Their “very positive” to “very negative” numbers were 7 percent and 30 percent.

So if we read that right, Obama is in just as much hot water as the Republicans are. And it’s not hard to see why. Military death benefits are usually paid to the deceased’s family very quickly, perhaps within days of the death. Obama’s Defense Secretary — apparently with the president’s knowledge — stopped those payments while the government was shut down. Anyone who would stop the payment of death benefits to the families of soldiers killed in action is despicable. The House quickly passed a bill to restore those benefits. Not even Harry Reid could stop that one. The president signed it.

We see memorials such as the World War Two memorial on the national mall closed and then reopened by veterans who remove the barricades. We see national parks closed, the Washington Zoo and more closed to visitors. It’s not that there’s no money to pay to keep them open, even with the government shutdown. It’s the mean-spiritedness of the Obama administration that is unprecedented.

These are the actions of committed ideologues. They will not give in or give up. They have to be beaten. As I wrote a couple of weeks ago, trying to give the congressional Republicans some actionable advice, I also said it was “win or go home” time for their leaders. They haven’t lost yet, but they’ve paved the road to their own destruction by not taking actions to put the government shutdown/debt ceiling monkey on Obama’s back, where it belongs.

So what to do?

The Republicans are being positioned to take the blame for the first-ever default on America’s debts. The media and Obama will say the default — if one occurs — violates the 14th Amendment, though that’s not true. (The 14th Amendment says that public debt authorized by law shall not be questioned. Therefore, if the debt ceiling isn’t lifted, the debt isn’t authorized by law and thus is constitutionally unprotected from doubt or default.)

The most important thing the Republicans have to do is make any default Obama’s responsibility. The way to do that is for them to pass — today —a “clean” debt ceiling increase to cover a period of two or three months and keep the government shut down. Forget passing anything else, including any conditions attached to the debt ceiling increase. Obama and Reid will use whatever appendages a bill has attached to it as an excuse to turn it down.

If the Republicans do that, there’s still a chance to turn the tables on Obama. (They lack the energy and the courage to do the things I suggested two weeks ago to make that turnabout a certainty.) The key is to keep the government shut down while increasing the debt ceiling and avoiding what may be the only catastrophe Obama has warned against that actually qualifies as a catastrophe.

People are beginning to see that Obama is perfectly willing to cause America to default on its debts if he’s not given complete control of the federal budget and the debt ceiling. When they stop and think about it — and some do — they’re not willing to place that amount of authority in Obama’s hands.

If Republicans offer the clean debt ceiling increase while keeping the leverage of the government shutdown, Obama may still have to come to the table. And there’s one way to make sure that happens.

No one can bring about Republican unity in the next week or the next year. But there might be a way — even within what Rush Limbaugh calls the “conservative commentariat” — to at least unify around the idea that the problem isn’t Ted Cruz, Mike Lee, or the Tea Party. The problem is Obama and his minions in the Senate. It needs to be said loudly and clearly every hour of the day.

It’s long past time congressional Republicans quit appearing on television to whine about the fact that the president refuses to meet with them. And to quit talking about the lack of White House leadership. C’mon, man.

At this point it isn’t about leadership. That word is used by the Boehnerites as a euphemism replacing the words “fault” and “blame.” This is about the president’s willingness — even eagerness — to bring about a default on the nation’s debts if he doesn’t get everything he wants.

Republicans need to pass the clean debt ceiling increase, keep the government closed down, and blame Obama for this mess in the clearest and most direct terms. There’s only one guy to blame for the shutdown and the debt ceiling crisis: Barack Obama.