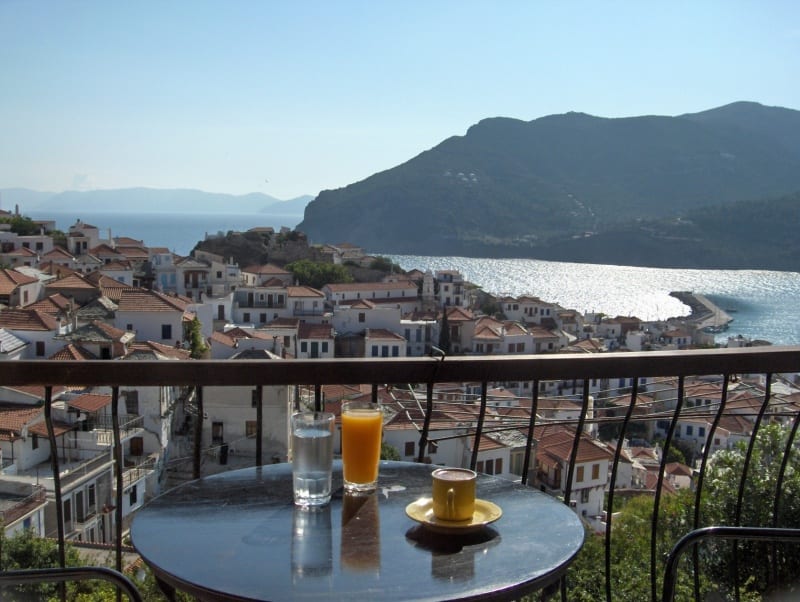 My wife and I spent the month of September in Greece. As always, there was no shortage of pleasant pursuits, from revisiting back issues of The American Spectator we took along, to sampling the seafood at the waterfront tavernas and drinking red wine produced from our neighbor’s vines fewer than fifty meters away. We had ample time, as well, to talk with Greeks about their ongoing economic “crisis” and, among other topics, the tourism business as the 2013 season drew to a close.

Excepting several days in Athens, we passed our time in Greece on the island of Skopelos. Where’s that? Well, find Athens on a map and trace a line due north; you’ll cross the very large island of Evvia and then a patch of the Aegean Sea before reaching the eastern end of the much smaller island of Skopelos. According to Nigel McGilchrist’s 2010 book The Sporades, Skopelos is the second largest island in that northern Aegean chain, with just over 4,700 permanent residents. Tourists swell the population considerably for about four months each year. Nonetheless, culturally Skopelos is a small town, which happens to be a rugged, forested, beautiful island where the outdoor scenes in the movie Mamma Mia were filmed.

Like all Greek islands, Skopelos has a long history. Its coastline was a “busy thoroughfare” in antiquity, and its “prized wine” was exported widely, including to points all around the Black Sea. In the late Middle Ages it was ruled by the Byzantines, and then by the Venetians after the fall of Constantinople in 1453. In 1538 the island was captured for the Turks by Barbarossa who, as was sadly something of a pattern with the Turks, left Skopelos “devastated and depopulated.” The island became home to refugees from Ottoman-ruled Thessaly and Macedonia in the 1820s, and received another wave of refugee Greeks driven out of Turkey a century later.

Skopelos was occupied initially by the Italians in the Second World War, then by the Germans. The Nazi occupation is recalled as having been brutal on the island and throughout Greece. It was a time when young men escaped across the water to join resistance forces on the mainland or hid in the island’s mountains. Fear and famine were ever present.

After the Axis armies were expelled by the Allies, Greece was consumed by a savage civil war. Soviet-backed communist insurgents sought to wrest control of the country from government forces. Even on the islands, villages were bitterly divided and family members often pitted against one another. Consistent with the country’s long history, contending foreign forces played a major role in the fate of Greece and its people.

In recent decades, tourism has been the driver of Skopelos’ economy, and for the most part of Greece’s as well. Even as British, Germans, and Russians now come to vacation and not to conquer, Greece continues to be at the crossroads of the eastern Mediterranean. Developments in the Balkans, Turkey, the Levant, and the Arab countries have a direct impact on not only the Greek tourism industry, but also the country’s internal security and stability.

Two years ago, protesters against “austerity” measures required in connection with the European Union “bailout” of the Greek economy “occupied” Syntagma (Constitution Square) and other areas in central Athens. Sadly they besmirched the city, their vandalism leaving the upscale area around the Parliament building marred by spray paint, burned out stores, and broken marble facades. Rolling “anti-austerity” strikes by public employee unions crippled key tourism related infrastructure. At the same time, a heavy influx of illegal aliens from countries in Asia (Afghanistan and Pakistan in particular), the Middle East, and Africa was straining social services and law enforcement resources. Much of Athens was dangerous for visitors and locals alike. Unsurprisingly, many tourists gave Greece a pass in favor of then relatively stable and welcoming destinations such as Turkey and Egypt.

Last year’s elections in Greece resulted in a three-party coalition government that remains in power. The current regime has targeted street crime in a manner reminiscent of Rudy Giuliani’s approach to New York City’s problems in the 1980s. Systematic police sweeps requesting identification from loiterers have cleared most illegal immigrants from urban areas. Athens is noticeably much cleaner and (we are told) safer than it was a couple of years ago. Because Athens is the gateway for foreign visitors to most islands, the new government’s actions have helped tourism in Athens and on many islands as well.

Notwithstanding these and other significant steps to address domestic problems, at least equal credit for the upturn in Greece’s tourism fortunes this year goes to events in the surrounding region. The ascendance of Mohamed Morsi and the Muslim Brotherhood in Egypt led to what the Wall Street Journal Europe called the worst attacks “in centuries” on the country’s Christian minority, and more than a few assaults on Western tourists, women in particular. In Turkey, meanwhile, the increasingly Islamist government of prime minister Recep Erdogan seemed to be undoing decades of secular governance; its promotion of religious and ethnic intolerance gave many would be visitors pause. And the specter of the Syrian civil war loomed large, also discouraging travel to destinations in the eastern Mediterranean (perhaps excepting Israel).

Thus, Greece’s resurgent tourism is a silver lining in an ominous cloud of unrest and violence that casts a long shadow across the entire Middle East and beyond. As a consequence, in Athens and on Skopelos, the long embattled Greek tourism industry saw improvement even as many difficulties persist in the Greek economy generally.

We saw various manifestations of the improvement. On the island, the small market across the road was open again this year, after having been closed for lack of business last summer. One of our favorite restaurants, also shuttered last year, was open this summer and business was strong. Two tavernas we frequent had resumed hiring non-family wait staff. An influx of Russians, and even some Australians and Japanese, appeared to have augmented the usual complement of British and German tourists. These and other signs were positive, if measured, changes from the year before.

Still, when we asked people, “How are things this year?” the word we heard most often in response was “discolo” — “difficult.” The comeback of tourism was decidedly uneven. We saw this in the different accounts of small business owners on the island, in the curtailed inter-island boat schedules, and in our observations, and conversations with friends, in Athens.

The Greek economy continues to be in a deep recession. Unemployment is well above 25%, and among “youth” is above 60%. For many Greeks, salaries and pensions have been cut. The climb back will be steep and hard, and the country’s future depends on much more than tourism. But having numerous and happy visitors is a vital piece of the puzzle, and it was gratifying to see signs of progress this year.