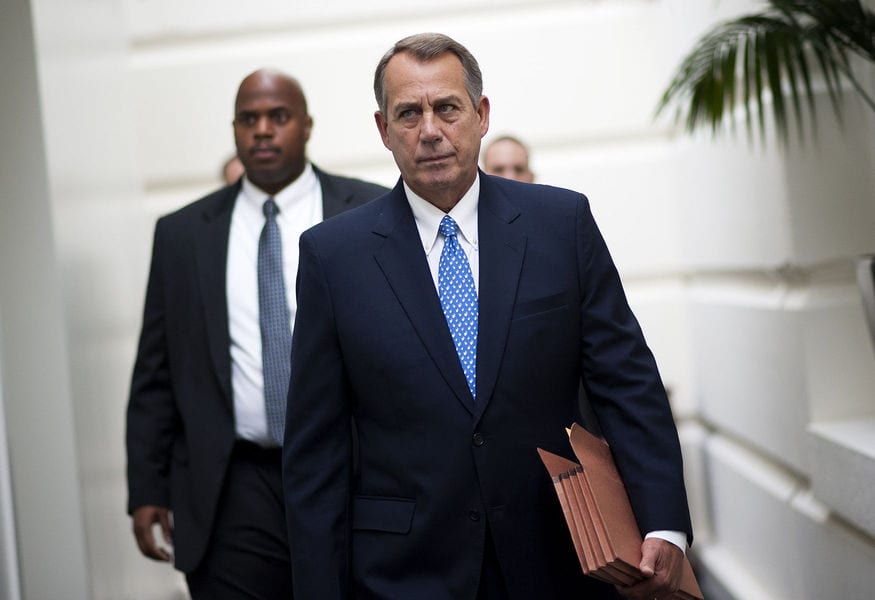 “CONSERVATIVE CRACKUP ON DEBT SHAKEDOWN,” screeched the headline on Huffington Post (October 9, 2013), a statement to which I took great exception. The unfolding disaster on the Hill is not conservative in the least. It seems to be a toxic brew of populism and neo-libertarianism. Or maybe it is just a manifestation of a post-modern death wish, politically speaking, to which even sensible Republicans have succumbed, with the potential of bringing down their party, government, and nation in the hopeless task of blocking Obamacare without actually winning elections.

Isn’t there something a bit out of whack when the supposedly “conservative” party indulges in the kinds of escapades usually reserved for community organizers and followers of Saul Alinsky? That said, even Alinsky posited Rule 11, “The price of successful attack is a constructive alternative.” Assuming the Ryan plan is a constructive alternative, and I do, is shutting down Obamacare without winning the White House or at least the Senate, really an option?

Ed O’Keefe and Aaron Blake of the Washington Post report that the Secretary of Defense says his Department is “entering into an agreement with the Fisher House [a philanthropy providing temporary housing for families of military personnel undergoing medical treatment at military and Veterans hospitals] that will allow the federal government to provide the family members of fallen service members with the full set of benefits they have been promised, including a $100,000 death gratuity payment.” The House subsequently voted 425-0 to approve a measure ensuring the Pentagon is able to pay death benefits for families of service members killed in the line of duty.

You really have to have a tin ear for politics not to discern the subtext of this story which is something like, “Mad dog Republicans abuse military families.” Unfortunately, given the subsequent CYA vote by the House, it has a ring of truth about it. Post hoc, ergo propter hoc? Maybe the sun doesn’t rise because the cock crows, but you can’t trust those Republicans. You get the drift.

You may say that the mainstream media is colluding with the Obama administration to put the worst face on the federal shutdown, and you would be right. But that is just the point. The Republicans should have known that this is how the thing would be played out much to their chagrin.

On a personal note, I am prepared to join my co-religionists in opposition to Obamacare’s HHS mandates, through non-violent resistance, if it comes to that. But we have prudential, moral, and constitutional obligations, as recognized by Thomas More andAlexander Bickel, first to defend our civil, religious, and legal rights through the legislative and judicial processes without resorting to extra-legal action or irresponsible political nihilism. We also must have the political smarts not to sacrifice long-term opportunity, e.g., winning back the Senate, for short-term thrills and headlines.

As I have said before on this site, tell me how this ends. For instance, how do these machinations interact with the Virginia gubernatorial race where Republican Ken Cuccinelli, after a September boomlet, is now regressing in the polls? David Sherfinski, writing in the Washington Times, attributes this to negative reaction over the federal shutdown (“Shutdown seen helping McAuliffe, hurting Cuccinelli,” October 9, 2013). This is progress? Terry McAuliffe, the original “Party Animal,” the future governor of the Commonwealth?

John Podhoretz, the neoconservative editor of Commentary and columnist for the New York Post, just penned a piece entitled, “Suicide of the Right” (October 8, 2013), in which he cites an ABC polling data revealing public disgust with both the Republicans and Democrats in Congress, 71 percent faulting the former, 61 percent the latter, and only 51 percent faulting the President.

That is a 20 percent differential between the GOP and the President who commands the national bully pulpit and a fawning press which shares his overall view of the world. The Republicans have brought a knife to a gunfight.

Referring to Republicans promoting the shutdown strategy, Podhoretz says, “I dislike what they dislike. I want what they want.” And he admits that more Americans claim to be conservative than liberal and a majority view Obamacare unfavorably. “But it has been true for more than 20 years that Americans are twice as likely to call themselves conservative — and in that time Republicans have lost the popular vote in five out of six national elections.”

“There is only one electoral vehicle for conservative ideas in the United States — the Republican Party.” This current strategy is only damaging its brand, argues Podhoretz. We are “ruining it, not repairing it.”

Is there a silver lining out there? The elision of the debate over defunding Obamacare into the broader, more immediate and consequential one over the debt ceiling offers the opportunity to change the subject or reconfigure the battlefield if you will.

In an op-ed for the Wall Street Journal Wednesday, House Budget Chair Paul Ryan (R-WI) argues that negotiations between the White House and Congress are hardly unusual and not to be disdained by President Obama. More significantly, Ryan, a native of Wisconsin, outlines “common sense reforms of the country’s entitlement and tax code,” some of which are supported by Democrats such as Senator Ron Wyden of Oregon and retiring Senator Max Baucus of Montana.

What do you say, Mr. President?