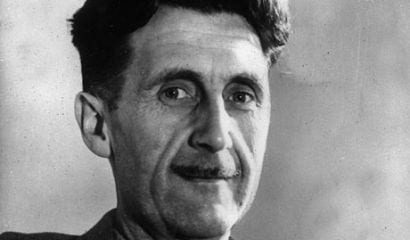 HOW MUCH OF the real George Orwell can be found in this new collection of letters is an open question. “Good prose,” he once wrote, “is like a window pane.” The good writer, he told us, will strive mightily to efface all artifice from any piece of writing, leaving behind only his gleaming sentences and the thoughts and images of which they are the direct and flawless expression.

Since it first appeared, in the essay “Why I Write” in 1946, this line of Orwell’s has been quoted so often we can easily forget that it is false. Even the truest writing is artificial, as Orwell knew, because writing is unnatural. Some sentences will be more honest than other sentences, it’s true, and they will be well-intentioned or not, to one degree or another, but none of them will be transparent. Head doctors tell us we can’t glance in a mirror without some adjustment of the facial muscles, or walk onto a stage without a change in posture or gait, no matter how infinitesimal or sly. Something similar happens when we take pen in hand or huddle in front of the keyboard. Nobody transfers himself whole and natural and naked to the page to be gazed upon by friends and strangers through the glass.

I think the famous dictum has survived despite its absurdity because to many of his admirers Orwell was its embodiment and proof. On the page he appears as a political and literary writer who has utterly cleared his mind of cant—cant being the common mode of speech in political commentary and literary criticism, no less in his era than ours. He died in 1950, lucky for him, so he didn’t have to endure celebrated writers tossing out hack phrases like “grow the economy” or “America’s working families” in once-sophisticated journals like the Atlantic or the New Yorker. But he sniffed out their equivalents and tracked them down like a bird dog. When a critic in his own day praised one novel as simply “luminous” and dismissed the next as merely “sentimental,” or when a party-line columnist described the “petty bourgeois” and invoked “class consciousness,” Orwell knew what was going on underneath the fog of cliché: not much. Habit and impulse replace thinking, an off-the-shelf image boxes out a lively one, and the result is “the mixture of sheer vagueness and incompetence that is the most marked characteristic in modern English prose.”

It’s odd that a writer who respected transparency and clarity of language above all things should himself be so misunderstood by at least half his admirers. Among the scribbling classes, Orwell fans seem to me to be equally divided between right and left. To cite an easy illustration: Norman Podhoretz’s famous essay from 1983 claimed Orwell as an early incarnation of neoconservatism (a proto-neo!), owing to his staunch anti-communism and pro-Western sympathies. Podhoretz’s essay was furiously rebutted by the late Christopher Hitchens, who later went on to produce a book calledWhy Orwell Matters, citing his hero’s emphatic atheism, anti-imperialism, and socialism as evidence of his undying identity as a man of the left. Somebody here has got Orwell all wrong.

Maybe both sides do, or, just as likely, it may simply be a fool’s errand to try to cut a writer as expansive and free-ranging as Orwell into categories easily understood today, more than 60 years after his death. His friends didn’t quite get him either. “It was difficult to know what he felt about anything personal,” Malcolm Muggeridge wrote. In his helpful introduction to this volume, editor Peter Davison writes that “Orwell had within his deepest self an unresolved conflict that made him so contradictory a character.” He was frail and sickly for most of his life but possessed enormous physical courage and took pleasure in arduous outdoor labor. At his death, he was an internationally successful author but had never abandoned his belief that he was a miserable failure. He took every opportunity to slag Christianity but consecrated both of his marriages in a church, made sure to baptize his adopted son, and provided for his burial in an Anglican graveyard accompanied by the Book of Common Prayer. He was a professional controversialist and attention-getter who hated to have a fuss made over him by friends.

I do suppose, though, that he would be pleased by the fuss made over him by Peter Davison. Having written a solid critical study of Orwell, Davison agreed 20 years ago to edit the Complete Works. It was a Herculean task—20 volumes, a little less than 10,000 pages—and Sisyphean, too, since every time the corpus looks settled, a new tranche of letters or memoranda or even completed articles pops up. Three years ago Davison had to produce a supplement to the completed works, and last year he put together a selection from Orwell’s diaries. Most of the letters in the new volume have been published before, scattered in collections among diary entries and journalism, but here they’re arranged to make a narrative, supplemented by occasional letters to and about Orwell from others. Filling nearly 600 pages, the letters here make up, as Davison points out, “only a small proportion of what is available.” Any Orwell admirer will be grateful for Davison’s industry in carving out manageable chunks from the millions of words Orwell wrote, and for all except the most fanatical, this will be plenty. There are pleasures and surprises on every page.

THE LETTERS REMIND us that works we have come to understand as masterpieces of literary journalism were, once upon a time, mere magazine submissions trying to make their way in the world, blocked at most every turn by the stupidity, tastelessness, and present-mindedness that all editors, except mine, habitually succumb to. “It doesn’t matter about the Tolstoy article,” Orwell wrote to an American editor who temporized about publishing the towering essay “Tolstoy, Lear, and the Fool.” He asks the editor to pass the manuscript on to his American agents. “It’s possible they might be able to do something with it, though as they failed with another…article (one on Swift), perhaps this one is no good for the American market either.” That “(one on Swift)” was “Politics vs. Literature,” a staple of essay collections for two generations and an undoubted masterpiece.

An unavoidable theme is the unmoored nature of the freelance life: too much work or not enough, the appearance and vanishing of magazines, above all the endless worries about money. Indeed, for Orwell the only thing worse than working freelance was working a steady job, at least the jobs he held longest, with Indian Imperial Police in Burma and later as a writer of propaganda for the BBC during the Second World War. The latter drew on virtues—his gift for plain prose and his appetite for work, his abiding patriotism and his hatred of fascism and all other forms tyranny—that conflicted with perhaps his greatest virtue as a political writer: his refusal to toe the line of any party or faction.

It got him in trouble, and still does. The letters show us in detail Orwell’s effort to steer the BBC and other employers away from hiring hacks he knew from personal experience to be fellow travelers or worse. He even made lists, running finally to more than 130 names. When the lists and letters were first made public a decade ago, Orwell’s stature wobbled on the left. Hitchens leapt to his defense by insisting that he didn’t “name names” at all. Orwell, wrote Hitchens, “wasn’t interested in unearthing heresy or in getting people fired or in putting them under the discipline of a loyalty oath.” Actually, as the letters make clear, Orwell did want to do those things, with the possible exception of enforcing a loyalty oath. The letters give those of us sympathetic to the argument for Orwell-as-proto-neocon another chance not to act smug.

There are moments in the letters when Orwell’s passion for clarity and precision betrays a literal-mindedness that he always took care to wring from his published prose. It sometimes approaches self-parody. One day, walking through an ancient cemetery, Orwell saw a ghost. He—Orwell, not the ghost—was 28 at the time, and he rushed to write a letter to a close friend describing the encounter. “Presumably an hallucination,” he admitted, but not before he drew for his friend a meticulous diagram of the churchyard, his own movements through it, and the movements of the ghost, together with a long account of his (the ghost’s!) clothes, gait, and so on, all so that Orwell’s friend would have a precise record of what hadn’t, presumably, taken place.

Other times the effect is more than unsettling. His friend Muggeridge always assumed that Orwell, for all his icy reticence, was shattered by the death of his first wife—the freakish consequence of a botched routine surgery, a few years before Orwell’s own death from decades of accumulated bad health. But nothing I know of offers a clearer picture of Orwell’s disorientation than a harrowing letter he wrote to a young, pretty art student who for a time lived in a flat beneath his.

He opens with an apology: “You are very beautiful…[and] it’s scandalous that a person like me should make advances to a person like you, and yet I thought from your appearance that you were…a person who lived chiefly through the intellect and might become interested in a man who is much older and not much good physically.”

It’s clear she wasn’t interested, but Orwell soldiers on, reassuring her with testimony to his ill health and foreshortened life expectancy: “What I am really asking you is whether you would like to be the widow of literary man.” There will be royalties to collect, he says, and lots of “unpublished stuff” to edit posthumously. “It isn’t so much a question of someone to sleep with, though of course I want that too.” And because “I am also sterile, I think,” she would be free to find a “handsome young man” with whom she could have children. “I have very little physical jealousy.”

“You say you wouldn’t be likely to love me. I don’t see how you could be expected to.” No, he goes on, “I want peace and quiet and someone to be fond of me.”

As prose, I think, this comes as close as possible to transparency, laying bare grief, loneliness, lust, neediness…or is it guile? In any case, for a reader who honors Orwell as both a man and an artist, it is almost too painful to bear, and a reminder of why we should be grateful that good prose is never like a window pane.