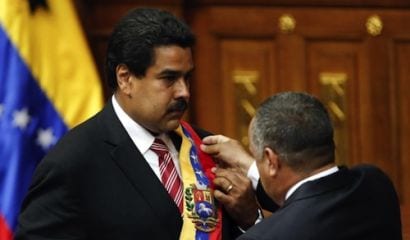 Among the happiest people in Venezuela after President Maduroexpelled the U.S. Chargé d’Affaires and two other diplomats was Henrique Capriles, the principal opponent in the presidential election last April. The White House had put out public “feelers” toward improving relations just before Hugo Chavez’s death. The victory of Nicolas Maduro, hand picked by Chavez, made the earlier American move appear to be an unnecessary advantage to the new president in the eyes of his former opponent, Capriles.

From Henrique Capriles’s view Maduro benefited by the Americans’ short-sighted action even though there clearly was to be no change in the previous Chavista anti-U.S. policy. Maduro officials stepped up their charges that Capriles maintained regular communications with the U.S. and other Western embassy representatives. There was nothing new in these complaints that previously had been a staple of the Venezuelan government while Chavez was alive. What was new was that they had been pressed forward at all by the new Maduro regime.

Last spring when Maduro came to power in a narrow and contested victory over Capriles, there was a flurry of good will messages exchanged by Caracas and Washington. These statements had followed on conciliatory unofficial talks begun during the final stages of Hugo Chavez’s life between his representatives and the Department of State. This pleasantry did not last long into the new Maduro administration. Two American defense attachés were declared persona non grata in early March on the grounds they had attempted to subvert key officers of the Venezuelan Armed Forces. Things grew worse after the Maduro government charged the French engineers working on his presidential airplane with purposely delaying the repair in order to prevent the Venezuelan president from going to the United Nations conference in New York City in September.

After a swiftly escalating attack on the American administration in September, President Maduro decided to kick out the three U.S. diplomats. They were charged with encouraging sabotage of Venezuela’s electric grid as a way to disrupt the economy. Nicolas Maduro did not mince words in explaining in a public pronouncement: “…These officials [American] spend their time meeting with Venezuelan extreme right wing, financing them and encouraging them to take actions to sabotage the electrical system, to sabotage the Venezuelan economy.” Not too long afterward Washington responded by returning the favor: The Venezuelan ambassador and two of his key aides were sent back to Caracas.

Maduro is in an increasingly difficult political position as the Venezuelan economy spins into a severe downturn. Inflation is unofficially characterized at approaching 45% on an annual basis. Even more importantly there is a growing shortage of even basic commodities. Blaming the Americans as being behind the escalating mess is just about all Maduro and his team can do. The problem for Capriles is that Maduro just as easily can declare that the Capriles “clique” is behind the American “sabotage,” and toss him and his chief assistants in jail.

Luckily for Capriles he has broad personal support among a wide age spectrum of voters who are attracted to the relatively young (41), vigorous lawyer. His loss to Maduro was very close and thus politically dangerous for the entire socialist revolutionary base of the Hugo Chavez legacy. Maduro treads softly on these matters. Better to blame the French and Americans when the lights go out and the planes don’t fly.

The bottom line of Maduro’s ability to stay in office is his relationship with the Venezuelan military. Hugo Chavez personally anointed Maduro, and that was accepted by the military leaders. Maduro was the man, Chavez supposedly said, who would be able to continue the “Bolivarian Revolution” he and his military comrades had started. The former professional army officer, Chavez, was one of them — and respected for it.

It would be fine for Maduro to have the military squarely behind him, but they are not. They already have been publicly blamed in some sectors for the economic shortfalls. The military mishandling and mal-administration of the petroleum port facilities is a widespread issue among the political elite. Political rivals such as Diosdado Cabello, President of the National Assembly, are still burning over the choice of Maduro by Hugo Chavez. Cabello, as Chavez’s ex-chief of staff, was originally thought of as Hugo Chavez’s first choice. It is said among the insiders in Caracas, however, that even more dangerous to Maduro is former general and ex-minister of defense, Henry Rangel Silva. He successfully ran for governor of Trujillo state and is waiting in the wings now for his chance to move up. Capriles has plenty of competition beyond the incumbent Maduro.

The rumbles in Caracas are — not unexpectedly — to expect a coup. The talk around the still very active cocktail circuit is that the Americans are bound to tip the scales one way or another. Washington, nonetheless, seems steadfastly uninterested in soiling its hands in any further Venezuelan mess. Can you blame it?