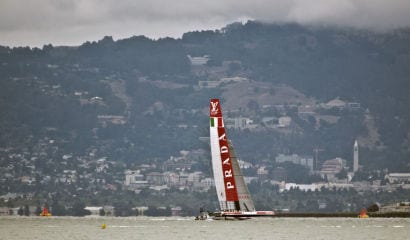 I spent a couple of nights in Berkeley. That may bring student radicals to mind, but they are long gone. Some of the professors still at the university no doubt filled the bill, but now they hold the whip hand and obedience is what they expect. And receive. A current professor tells me that Berkeley students believe what they’re told. They seem to be mostly female (54%) and/or Asian. I did see one or two blacks, but no more than that, and they looked more African than American. I walked past a couple of open-door classrooms where the students — how absurdly young they look! — sat with pencils poised, ready to take dictation.

My hotel, at the corner of Bancroft and College, close to Boalt Hall Law School, was well situated, and the absence of elevators gave my legs a much needed workout. At breakfast there were two other guests, plus skinny copies of the San Francisco Chronicle. It survives, but barely.

Searching for items which might seem strange to future generations, I came across this. The hotel has “all organic cotton bedding” and “drapery made from recycled soda bottles.” It was an “Alameda County Green Certified business.” So I felt better right away.

The weather was perfect. At Caffe Strada next door, mostly outdoors, the students were either underlining passages in textbooks or tapping on hand-held devices. I don’t have one of those but I’m told they are “texting.” I am none the wiser. I learned to use computers, do email, go online, Google. They all quickly became not just useful but indispensable. But texting? “I am here at Caffe Strada….” Is that what they say? Sorry, but I still don’t get it. Can someone explain why so many young people do this? It is a generational thing.

Online, I read that Strada is “My favorite place to study and do homework it’s such a chill environment.” Also: “It’s a place to hang and chill with friends.”

On the sidewalk, a Sierra Club man was holding a clip board and signing up volunteers. He urged loggers to “stop clear-cutting.” I tried to tell him that private loggers have no interest in clear cutting, because they’ll want to come back for the new growth. It’s government agencies with short time horizons that clear-cut. But I made no impression. He smiled politely and said that they also oppose fracking.

Of all places, clear-cutting has been an issue in San Francisco. Local activists want to get rid of “non-native” trees, of which the eucalyptus is the prime example; followed (strangely enough) by the Monterey pine. The argument is that these “immigrant” trees destroy the habitat for native vegetation. But more recently, counter-activists have appeared on the scene. According to the WSJ:

[I]n one of the most environmentally conscious cities in America, a donnybrook has broken out over plans to chop down thousands of non-native trees and replace them with trees and other vegetation indigenous to the area.

City officials disavowed plans for clear-cutting. Still, “If the city goes through with the plans to remove healthy trees,” one counter-activist said, “we will actually blockade them.”

A headline that day in the Daily Californian (the university paper): “High Hopes for Hemp: White House cannabis announcement leads to optimism at local dispensaries.”

Berkeley has its share of “brutalist” buildings, with board-framed concrete walls — the wood grain conspicuous. This is supposed to advertise their modernity but now they just look shabby. Life is ugly, they proclaim, just as abstract expressionism in the 1940s conveyed that life was meaningless.

I went down Bancroft to Telegraph Avenue, famed street of protest in the Sixties. It’s seedy and bedraggled today but I was glad to see that Moe’s is still surviving. It’s one of the best second-hand bookshops in the country. Moe Moskowitz himself is no longer with us. He always had a cigar in his mouth and for 15 years defied local “no smoking” ordinances. At one point he threatened to turn the store into a “smokeasy.”

At Sproul Plaza an evangelical Christian group was preaching. A small crowd of students listened politely. I would like to have stayed and made notes. It’s hard to know what younger generations are thinking and it has always been so. Ask, and they won’t really tell. Maybe the listeners were just chilling out? Maybe hearing something new? You couldn’t tell.

My wife had joined me and we had to be on our way. We drove on to Napa Valley, 50 miles away. En route we drove through Vallejo, until recently one of California’s bankrupt cities. Municipal unions made off with the money. The signs read “Welcome to Vallejo, City of Opportunity,” but as Michael Lewis wrote,

the shops that remain open display signs that say WE ACCEPT FOOD STAMPS. Weeds surround abandoned businesses, and all traffic lights are set to permanently blink, which is a formality as there are no longer any cops to police the streets. Vallejo is the one city in the Bay Area where you can park anywhere and not worry about getting a ticket…

Napa Valley prospers. It’s grape fields as far as you can see and the grapes were ready for the picking. But no workers were in sight. I heard they often work at night. They are well remunerated, happy to have the work and many have 401(K)s. But don’t ask me about wine. I can tell the difference between red and white but that’s about it. I prefer a Guinness stout.

We had come to see an old friend who lives in the Veterans Home in Yountville. George Yount started one of the early Napa Valley grape farms, in the 1850s. Today, from Yountville to Calistoga, it’s fancy shops and restaurants all the way. They cater to wealthy “enotourists” who spend hundreds of dollars a day.

The Veterans Home is a state-run facility with a thousand residents. It’s a beautiful place, I must say, with golf course and library. Almost up to country club standards — except that two veterans share a room, which can lead to conflicts. Women veterans live in separate housing. When transgenderism strikes I guess there could be trouble.

We returned to San Francisco via the Golden Gate Bridge. We drove to Lincoln Park, in the northwest corner. An absurd piece of sculpture consisting of angular twisted steel girders, the same color as the Golden Gate Bridge (international orange), was placed solemnly in front of a museum. The bridge itself, in all its magnificence, could be seen not far off.

Unlike the technology-aping twisted metal, the bridge is a real piece of art because it never tried to be “artistic.” Its aesthetic function was always subordinate to the mundane task getting people across the water. Once “art” is isolated from function and becomes merely “creative” —well, we are in museum-land. If you want to look at outstanding modern design, try the Boeing 747. There too, aesthetics came last, function first.

When I came to America I was attracted to New Orleans jazz. Musicians of the old school thought of themselves as artisans. Their business cards read “music for all occasions”: dances, weddings, funerals, parades. Artist? You wanted a sign painter? They wouldn’t have known what you were talking about. All was lost in the concert hall, as happened with European music in the 19th century. Suddenly we were expected to do nothing but summon up our finer sensibilities. The language of music was debased and then ruined by the avant-garde. Then it happened here too.

On our last night we were in Millbrae, close to SFO. We went to a packed Chinese restaurant and were the only occidentals present. Sunday night is family night, and most tables were set for ten. The wait for a small table was lengthy. I studied the menu. Among the items: vinegar cured chicken feet; preserved cabbage with gizzard; stir fried goose intestine. For dessert? How about home-made turtle jelly?

I also noticed this: At the big tables the Chinese men were in charge, as they are less and less here. We flew home the next day and I found myself thinking that the Chinese will become the world leaders, as America once was. But not till after my time.