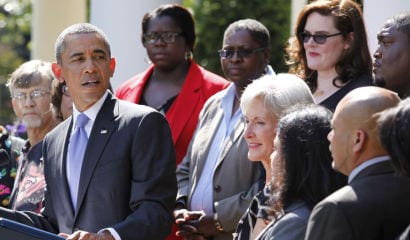 Day 2 of the government shutdown, and look out the window. The sun is still shining, and the sky is still blue. The birds are chirping.

The Great Government Shutdown is not that big a deal, even for the government. The federal civilian workforce includes 2.9 million bureaucrats. Out of that, only 800,000 are being furloughed, or just 27%. Even for these workers, the shutdown just amounts to a paid vacation for a few days.

Just like the overballyhood sequester, average Americans won’t notice any change in their lives at all. But for those you who are offended and indignant by the shutdown, or who know somebody who is, I can tell you how to fix it.

Listen, if your friends, neighbors, and relatives are upset about the shutdown, and they want it to end, they have the power to stop it immediately! All they have to do is tell pollsters that the shutdown is the fault of President Obama and the Democrats. If they will just do that, the shutdown will be over faster than you can say Your Mama.

I explained the shutdown to my son, one of the few young men his age in America with a good job, this way in a text, when he asked about it:

It is a good demonstration that we have too much government. A fourth of federal workers, 800,000, are sent home, and no one even notices. Obama and the Democrats wanted the shutdown because they are certain the public will blame the Republicans, and it is part of the grand Obama/Democrat strategy to manipulate the public into voting down the Republican House majority in 2014, the last check on Obama’s increasingly authoritarian rule. Democrats care ONLY about their own political POWER and nothing else. The poor, minorities, seniors, are all just used as props by the Democrats to expand their political power. Notice how easily the Democrats dropped seniors and slashed their Medicare when that was convenient to enact Obamacare, which is only all about another opportunity for massive expansion of their power.

The Republicans did everything they could to avoid a shutdown, and still represent their constituents, because they know what the Democrats are thinking, and licking their chops about. They know that the Democratic Party controlled media will tell everyone the shutdown is the Republicans’ fault. Candy Crowley, Ann Compton, David Gregory, George Stephanopoulos, and the rest of the Democrat operatives carrying on their revolution by other means, posing as journalists. This is the world we live in.

The Republicans are just doing what they were elected to do — stop Obama’s runaway socialist transformation of America, into a slow growth, lagging behind, former world-leading superpower. And as I recently explained in this space, they have done a good job. They have reversed the runaway Obama Democrat spending spree from O’s first two years, with total federal spending now actually declining, in actual dollars, the last two years in a row, since the Republican House majority was first elected in 2010. The last time that happened was right after the Korean War, 60 years ago.

And now the Republicans have bravely fought to reverse Obamacare, as the American people have been demanding, which they will do, once they get the chance, I am confident.

Democrats for Dictatorship
But the continuing resolution (CR) fight is well worth the price, for what the fight has revealed about the Democrats, if the low information voters out there would just put on their thinking caps and pay attention. Republicans have now passed three CRs to fund the government. President Obama and the Democrats have just sneered at them, and pronounced that they are the ruling class, and do not need to stoop to negotiate with Republicans about it.

President Reagan served his entire 8 years in office with a Democrat majority House run by the partisan Democrat Speaker “Tip” O’Neill. Reagan never refused to negotiate with O’Neill and his House Democrats. Reagan had them over to the White House to talk to him all the time. Consequently, Reagan got a lot done with them. They refused to even consider any entitlement reforms (payola for the Democrat political machine). But Reagan succeeded in getting them to agree to serious reductions in domestic discretionary spending.

Reagan got through the Democrat-controlled House in his very first year $31 billion in spending cuts, close to 5% of federal spending then, which would be the equivalent of about $175 billion in spending cuts today. And those cuts were co-sponsored by a House Democrat! In constant dollars, non-defense discretionary spending declined by 14.4% from 1981 to 1982, and by 16.8% from 1981 to 1983. Moreover, in constant dollars, this non-defense discretionary spending never returned to its 1981 level for the rest of Reagan’s two terms! By 1988, this spending was still down 14.4% from its 1981 level in constant dollars. Even with the Reagan defense buildup, which won the Cold War without firing a shot, total federal spending declined from a high of 23.5% of GDP in 1983 to 21.3% in 1988 and 21.2% in 1989. That’s a real reduction in the size of government relative to the economy of 10%.

President Reagan also got through Tip O’Neill’s Democrat-controlled House a 25% across the board cut in federal income tax rates for everybody, compromised down from the 30% cut he campaigned on. Then in his second term, he worked with the long-time Democrat Chairman of the House Ways and Means Committee to achieve bipartisan support for the most sweeping tax reform in American history. As a result, during his time in office, President Reagan slashed the top federal income tax rate from an abusive, confiscatory 70%, all the way down to 28%, the greatest tax cut in world history.

As a result, the economy which the Democrats had left in shambles in the 1970s, with double-digit inflation, double-digit unemployment and double-digit interest rates, took off after a couple of years in the greatest economic boom in world history. Inflation was reduced to negligible levels at the same time, which all the Democrat poobahs said would be impossible, and federal tax revenues doubled as a result.

But President Reagan was a real leader, and heart and soul a product of middle-class American culture. Not a Marxist infiltrator who is not culturally an American, but raised during his formative years in Muslim Indonesia.

President Obama illegally granted Congress and its staff a special exemption to the requirements of Obamacare, contrary to the express language of the Obamacare law. Instead, Congress has its own special deal, financed by the taxpayers, with the Federal Employees Health Benefits Program (FEHBP). If Obamacare is such a good deal, why did even Nancy Pelosi go crying to President Obama on behalf of Congressional and staff Democrats when they realized they would lose this special FEHBP deal for themselves under the law?

The Republicans in their CR to fund the government expressly reiterated that Members of Congress and their staffs, as well as the President and Vice President and top Obama Administration political appointees, would all be subject to Obamacare in the Exchanges under the same rules as they have imposed on everyone else. But every Democrat in the Senate voted against that and in favor of the special exemption from Obamacare for themselves in the process of unpeeling and rejecting the Republican CR to fund the government. Landrieu, Pryor, Begich, every vulnerable Democrat.

President Obama illegally delayed the employer mandate in Obamacare for one year, again contrary to the express language of the Obamacare law. The Republicans in their CR to fund the government provided that the individual mandate on working people requiring them to buy the highly expensive health insurance that the government has chosen for them to buy, or pay a penalty, shall be delayed as well. But every Democrat in the Senate voted against that and in favor of imposing the individual mandate and penalty on working people next year, but not the employer mandate and its penalty on their big business contributors. That again includes Landrieu, Pryor, Begich, every vulnerable Democrat.

President Obama in fact has illegally delayed over 20 provisions of his own Obamacare law, contrary to the express provisions of that law, with no legal authorization to do so whatsoever. The Republicans in another CR to fund the government provided for a one year delay in the entire Obamacare law, which the President has already effectively admitted by his own actions is not ready for prime time. But every Democrat in the Senate just laughed this down as well.

Thus we have the Senate Democrats for Dictatorship Caucus. The one-year delay in all of Obamacare would have legally authorized the President’s illegal actions in all the parts of Obamacare he has illegally delayed. Without that, President Obama today is now effectively ruling by decree, without authorization of law, like the authoritarian ruler of a Third World, banana republic, with the full support of the Democratic Party.

House Republicans should respond by opening hearings, where witness after witness will recount all the illegal actions Obama has taken without authorization of law, indeed, contrary to his Constitutional duty to take care that the laws be faithfully executed. Such unspeakable conduct in office by Obama cannot be defended, amounting to impeachable offenses, and that is not a point over which reasonable people can differ.

It does not matter that the Republicans cannot succeed in removing Obama from office in the face of the Democrat majority in the Senate. The point is first of all that the Republicans must stand up for the rule of law in America. This is not Argentina or Venezuela, as Barack Obama, Harry Reid, and the rest of today’s Democrats believe. Secondly, this action will dramatize to the American people Obama’s egregious conduct in office. Thirdly, this action will put Obama and the Democrats on the defensive, over conduct that they cannot publicly defend.

Meanwhile, the Republicans seem to have hit their stride passing bills to fund the most urgent pieces of the federal government one by one. This may break through to even the low information voters out there that it is the Republicans trying to fund the government, and the Democrats refusing to do a thing to do so. The Republicans should pass these as actual appropriations bills in fact, and announce that they stand ready to meet Senate Democrats on these bills in a Conference Committee to keep the government funded whenever the Senate Democrats show up for work.