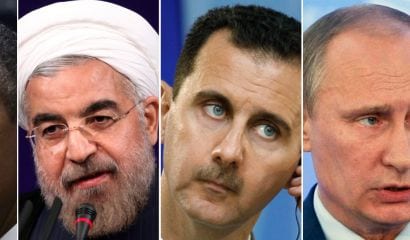 Why are the Russians so steadfast in their support of the al Assad regime? The same question can be asked about their relationship, through thick and thin, with the Iranian regime. There most likely is no single answer in either case, but one thing stands out. Both Middle Eastern regimes are now, and have been for as long as they have been in power, intensely occupied with the belief that Sunni-associated political interests are determined either to depose or at least minimize Shia dominance in their countries.

Russia’s preoccupation with Shia Moslems stems primarily from the many decades-old continuing rebellion of Sunni Islamic denizens of the Caucasus Mountains. These independence-minded tribal groupings have been battling against Moscow’s control going back to the days of Imperial Russia in the early 19th century, through the next century’s Soviet Communist years, and on to today. The people of the Northern Caucasus for years have been treated in Russia as a dangerous and even criminal community. The anti-Sunni character of the clerical Shia government of Iran that had deposed the pro-U.S. Shah Pahlevi became a natural ally of Russia after 1979.

In practical terms this has meant a close working relationship in the field of intelligence between and among the three countries, Russia, Syria, and Iran. This intelligence cooperation is more important that the actual information exchanged. The cooperative intelligence activity is a foundation for the broader political entente. Russian intelligence on the U.S. and E.U. intentions have been crucial for their two Middle Eastern partners.

The economic benefits that derive from this tripartite working relationship is also important in varying degrees. The Iranians sell natural gas to the rest of the world through large diameter pipelines flowing northward ultimately through Russia that the latter have had the primary role in building since the 1980s. In addition is the not inconsiderable black market trade between Russia and Iran aimed at avoiding the economic sanctions imposed by the West and United Nations. The Syrians have attracted billions of dollars of investment from Moscow as well as leasing port facilities of Tartus to the Russian Navy since 1971 and the beginning of the Assad dynasty. This action alone has been invaluable to Russian security in giving it a base in the Eastern Mediterranean. In the case of both Syria and Iran, the Russian military assistance in training personnel and materiel that both allies have received over the years is valued in the many billions of dollars.

Like most things in the Middle East, the Russia-Iran-Syria relationship does not exist independent of other factors and actors at play. The overthrow of the Muslim Brotherhood administration in Egypt was a victory over Sunni Islamic imperialism by Sunni Islamic secularism by use of military force. Any interest that Russia, Syria, and Iran might have in this evolution in Egyptian politics is limited to observation. For the Assad family the reduction of Brotherhood power is advantageous; the international element of the Brotherhood has been the Assads’ traditional enemy in Syria. The Iranians never were part of the dispute, and neither were the Russians. In this circumstance, the al Assad regime had a silent partner in the Egyptian military.

This type of complication is why regional veterans believe there is no such thing as an unchangeable circumstance or unchallengeable relationship. It’s a polite way of saying that Middle Eastern affairs are built on mutual distrust and what is known as taqiyah. The Koran is cited as the source of this concept, though accepted meanings differ. The shared theme in the various definitions, however, is that not divulging the truth in any action aimed at protecting the Faith or a believer in the Faith is acceptable. Those who follow Shia belief clearly accept taqiyah as justification for what is translated as “dissimulation” to protect their faith. With this as a precept of all dealings in the Islamic world of the Middle East – and most particularly of anything dealing with followers of the Shia belief system – negotiations and accords must be judged within this historical religious context.

While a Westerner may find such an ethical device merely a justification of convenience, followers of the Koran consider such a reservation to be essential in preserving an embattled culture and religion. In specific terms, this system justifies disguising your intentions and beliefs in dangerous situations if you fear for your safety from disbelievers. The entire Iranian security system is built on this mechanism. Several American administrations have been unable to comprehend the complexity and depth of this ancient acceptance of dissimulation as an integral cultural component. With this logical device in place, how can anyone grant legitimacy to the Persian claim to disavow development of an essential component of modern warfare such as nuclear weapons?

The Russians, for their part, are well aware of the philosophical and logical contradictions in Persian foreign and defense policy. Moscow and St. Petersburg have had to deal with the Persians for centuries. It has rarely been a cooperative relationship. Only now since the arrival of the fiercely anti-American theocratic Shia regime in Tehran has there been any consistent friendly accord. Nonetheless, Russia has a strong professional cadre of Farsi-speakers to enable them to deal with their new friends. This talent depth along with a similar grouping of Arabic specialists gives Vladimir Putin a strong Middle Eastern team. It’s about time for Washington to wake up to the strength of the Kremlin’s side. It is no longer a matter of competing ideologies of communism versus democracy. It’s straight power politics exercised for regional influence and domination.