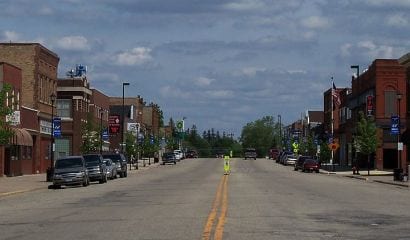 I went home again, and discovered a time machine. I don’t mean that as a metaphor, a word picture of how an aging man who visits the place where he grew up becomes a kind of time traveler. I mean that somebody in Kenyon, Minnesota (pop. 1,800), constructed an English police box, painted it blue in honor of the BBC fantasy series Doctor Who, and set it up in their front yard. Right across the boulevard from our previous major landmark, the Gunderson House, a lovely red Victorian built in 1895 by the richest man in town.

I’ve spent more time in Kenyon this year than any year since 1981, when my dad sold the family farm. I had three events to attend there this summer, each of them in its way a memento mori.

Getting from Minneapolis to Kenyon was more challenging than usual. First the state detoured Highway 56 through Randolph, the most direct route. Then, just to show their diligence and really do the job in a workmanlike fashion, they also detoured the second-best route, I-35 through Faribault. The fact that this strangled commerce to the Second Congressional District, which tends to vote Republican in a blue state, probably had nothing to do with it.

First there was the funeral of my great-aunt Ordella, 103 years old. She was the last surviving offspring of my great-grandfather, who came to America from Norway in 1888 and changed his name to Walker because the Norwegian one couldn’t be spelled the same way twice. Aunt Ordella first came to Kenyon on a winter day in 1915, on a train from Iowa with the rest of her family. They survived a derailment near Manly, Iowa, but my grandfather, her brother, suffered a neck injury that bedeviled him the rest of his short life. We buried him in 1954 in the same cemetery where we laid Aunt Ordella now.

Then there was the Walker family reunion, held at a relative’s farm. That relative cultivates more than a thousand acres, which is the pattern in the Midwest nowadays. The farm where I grew up was only 160 acres, but even then the small farm was becoming an unviable business model. Our old acreage, he informed me, had recently been sold again, as part of a larger package, for $10,000 an acre.

In my day, Kenyon was surrounded by scores of small farms like ours, each of them home to three to eight children, all of them requiring schooling. We had our own elementary and high schools then. But today’s big farms, homes to few or no children, mean smaller classes. The Kenyon schools merged with those of nearby Wanamingo years back. My old elementary school is still in use, but they tore down our high school, derelict for years, just a couple weeks ago.

It was a little disorienting for us, doing the reunion without Ordella. My brother noted that we’d all moved up a grade. Without her, the last of her generation, the relatives who’d previously been “old” got promoted to her former level of “venerable.” And my generation, previously middle aged, now ranks as old.

An uncle told me about an old-time method of corn planting called “checker planting.” It placed each seed in the exact center of a square of four other seeds, making it possible to run the cultivators from two different directions (north-south and east-west). Such precision ceased to be necessary with the advent of chemical herbicides.

Then a distant cousin came over to me and, wholly spontaneously, started telling me about “something we used to do, called ‘checker planting.’”

I looked for some larger metaphysical meaning in that coincidence, some message from Beyond. So far I haven’t come up with anything. I’m open to suggestions.

And last of all there was my high school class reunion. I won’t say which anniversary it was. Suffice it to say any group of people where I’m one of those in the best shape faces actuarial challenges.

A class reunion is the emotional equivalent of a slap from General Patton, a shock to jerk you out of your denial. Send not to ask for whom the defibrillator beeps, it beeps for thee.

We met in a new amenity in our old town – an actual guest hotel, with a restaurant and patio annex. Out on the patio, the sound of ambient conversation, along with tinkling silverware and the warble of live music from a country band, achieved that precise noise level that renders most people our age effectively deaf. We all said what we liked, and imagined we understood our old schoolmates’ responses. Almost the ideal formula for a smooth social occasion.

Under such conditions I might have walked over to the girl I had a silent crush on in school and opened my heart to her, knowing she wouldn’t understand a word I said. But I didn’t. Towns may change their essential character as they change appearance, but people, however they deteriorate, tend to stay pretty much the same.

I almost left early, something that has long been my custom. I consider it an act of kindness to others, a service guaranteeing a happier, brighter experience for all concerned.

But a friend talked me out of it. I’m glad I stayed. Somebody told me Highway 56 was open again. I tried it and it was.