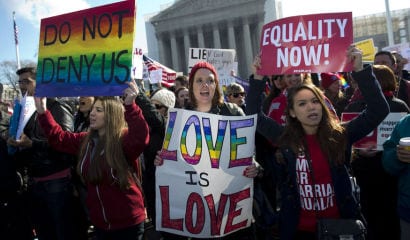 On a cold morning this past January in Gresham, Ore., Aaron Klein sat down with two customers at the bakery he owned with his wife, Sweet Cakes by Melissa. The two women, a bride and her mother, were making plans to purchase a wedding cake. Before discussing the details, Klein asked his customers a few standard questions. When would the wedding be? What was the groom’s name? At the second question, there was an awkward hesitation, and the mother explained that this would be a wedding between two brides. Klein politely but firmly told them that because of his and his wife’s Christian beliefs, they would not bake a cake for a same-sex wedding. Without a word, the bride and her mother got up and left.

About ten minutes later, the bride’s mother returned the bakery and began to debate Klein using biblical references to claim that her daughter was created that way and there was nothing wrong with her marriage. Klein was firm, asserting that he would not be involved in a lesbian wedding. When he refused to back down, the woman left. About two weeks later, Klein received a complaint letter and an official investigation notice from the Oregon Department of Justice.

It wasn’t long before the Kleins’ story hit national media. They faced waves of harassment from gay rights sympathizers in the forms of mail, picketing, and social media pages dedicated solely toward boycotting their business. They received death threats against their children.

LGBT groups targeted other wedding vendors in the Gresham area, threatening to boycott them as well if they continued or agreed to do business with Sweet Cakes by Melissa.

“People would keep calling [other wedding vendors] until they stopped doing business with us. It’s racketeering is what it is,” Aaron Klein told TAS.

As I’ve documented, the Kleins aren’t the only wedding vendors to face harassment and intolerance for practicing their beliefs. Jack Phillips, a bakery owner in Colorado, is still awaiting a possible jail sentence for refusing to bake a wedding cake for a gay couple back in July. In addition, the New Mexico Supreme Court ruled in August that Jonathan and Elaine Huguenin, owners of Elane Photography, had violated the Human Rights Act by refusing to take pictures for a same-sex “commitment ceremony” in Taos, N.M.

In the face of the vicious harassment, the Kleins also received an outpouring of support from fellow Christians and sympathizers. Orders were placed from people all over the country who wished to support the Kleins. But it was not enough to offset the damage the LGBT groups inflicted. At the end of August, the Kleins closed the doors of their bakery for good. Melissa will continue to sell wedding cakes from their home, while Aaron returned to his previous job driving a garbage truck full-time.

“At some point you look at it and say, this isn’t panning out financially,” Klein said. “I need to be able to feed my kids.”

Most of Klein’s children are very young and blissfully unaware of the threats and hate-mongering directed at their family. However, his eldest daughter, who attends public school in the Gresham area where tolerance and acceptance are emphasized almost daily, observed that the LGBT community is anything but. And she’s exactly right: The LGBT community will advocate tolerance when it means accepting gays. But respecting Christians and their beliefs? Forget it.

The Civil Rights Act of 1964 is often cited by gay activists as a bludgeon against perceived discrimination. But their legal case against the Kleins and other wedding vendors is weak. The Act was intended to prohibit discrimination within businesses that provide a human necessity, such as hotels and restaurants. For example, in a remote area where there may only be one or two hotels, it would be cruel to turn away someone where there is no other option for a roof over their heads. But a bakery? Refusing someone a wedding cake is not denying them anything necessary for their well-being. A cake is usually a very important part of a wedding ceremony, to be sure, but that couple could have gone to countless other bakeries to find one.

The Kleins are still in the process of dealing with the complaint. Aaron and Melissa must sit down in front of the Labor and Industries Board, separately, for questioning (a process that sounds more like an interrogation). If they are found guilty of discrimination, the judge can levy fines up to $2,000 for discrimination and up to $50,000 for emotional and economic damages to the lesbian couple.

“I know that we’re called to stand for truth and righteousness. Sometimes that can cause problems,” Klein said. “I’m more than willing to take on the problems that come with it to stand up for God’s work. I’m in the middle of it, but this is God’s fight.”

Though the Kleins’ story has mostly faded from the news for now, their fight is long from over. As they and other wedding vendors face discrimination accusations and struggle to defend their faith, likely in rising numbers with the end of DOMA, it’s important to remember the true meaning of tolerance and acceptance—and it’s not the definition the LGBT community preaches.