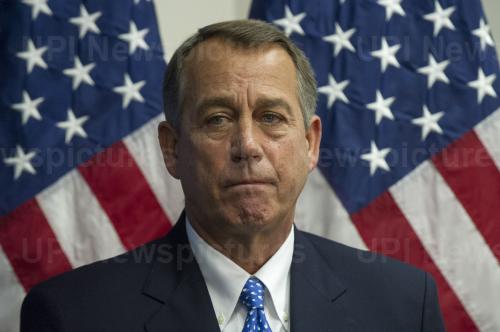 Trending
To Fully Comprehend Trump, an Insight Into the Jargon of NYC’s Outer Boroughs
by Dov Fischer
Mayor Pete: Red Diaper Baby
by Paul Kengor
The Absurd ‘Trump Is a Tyrant’ Trope
by David Catron
Sign Up to receive Our Latest Updates!
Register
Hot Off
The Press
Hither and Yon
Five Quick Things: Stupid Stupid-Proofing at Mardi Gras
by Scott McKay
Loose Canons
The Next Coup Against Trump Has Begun
by Jed Babbin

If the continued existence of mathematics depended on the ability of the Republicans to defend the proposition that two plus two equals four, that would probably mean the end of mathematics and of all the things that require mathematics.

Republican Speaker of the House of Representatives, John Boehner, epitomized what has been wrong with the Republicans for decades when he emerged from a White House meeting last Wednesday, went over to the assembled microphones, briefly expressed his disgust with the Democrats’ intransigence and walked on away.

We are in the midst of a national crisis, immediately affecting millions of Americans and potentially affecting the kind of country this will become if Obamacare goes into effect — and yet, with multiple television network cameras focused on Speaker Boehner as he emerged from the White House, he couldn’t be bothered to prepare a statement that would help clarify a confused situation, full of fallacies and lies.

Boehner was not unique in having a blind spot when it comes to recognizing the importance of articulation and the need to put some serious time and effort into presenting your case in a way that people outside the Beltway would understand. On the contrary, he has been all too typical of Republican leaders in recent decades.

When the government was shut down during the Clinton administration, Republican leaders who went on television to tell their side of the story talked about “OMB numbers” versus “CBO numbers” — as if most people beyond the Beltway knew what these abbreviations meant or why the statistics in question were relevant to the shutdown. Why talk to them in Beltway-speak?

When Speaker Boehner today goes around talking about the “CR,” that is just more of the same thinking — or lack of thinking. Policy wonks inside the Beltway know that he is talking about the “continuing resolution” that authorizes the existing level of government spending to continue, pending a new budget agreement.

But, believe it or not, there are lots of citizens and voters outside the Beltway. And what is believed by those people whom too many Republicans are talking past can decide not only the outcome of this crisis but the fate of the nation for generations to come.

You might think that the stakes are high enough for Republicans to put in some serious time trying to clarify their message. As the great economist Alfred Marshall once said, facts do not speak for themselves. If we are waiting for the Republicans to do the speaking, the country is in big trouble.

Democrats, by contrast, are all talk. They could sell refrigerators to Eskimos before Republicans could sell them blankets.

Indeed, Democrats sold Barack Obama to the American public, which is an even more amazing feat, considering his complete lack of relevant experience and questionable (at best) loyalty to the values and institutions of this country.

The Democrats have obviously given a lot of attention to articulation, including coordinated articulation among their members. Some years ago, Senator Chuck Schumer was recorded, apparently without his knowledge, telling fellow Democrats to keep using the word “extremist” when discussing Republicans.

Even earlier, when George W. Bush first ran for President, the word that suddenly began appearing everywhere was “gravitas” — as in the endlessly repeated charge that Bush lacked “gravitas.” People who had never used that word before suddenly began using it all the time.

Today, the Democrats’ buzzword is “clean” — as in the endlessly repeated statement that Republicans in the House of Representatives should send a “clean” bill to the Senate. Anything less than a blank check is not considered a “clean” bill.

The Constitution gives the House of Representatives the responsibility to originate all spending bills, based on what they think should and should not be funded. But the word “clean” is now apparently supposed to override the Constitution.

If Republicans want to show some seriousness about articulating their case, they might start by deleting the abbreviation “CR” from their vocabulary. As has been said, “The journey of a thousand miles begins with a single step.” That journey is long overdue.

Another Perspective
A Sanders Surge?
by Roger Kaplan
Special Report
Three Cheers for the Wall Street Journal
by Jeffrey Lord
The Right Prescription
Trump Expands GOP Base as Dems Disintegrate
by David Catron
Political Hay
Omens of a Political Apocalypse
by Robert Stacy McCain
Sunday Report
The Pope’s Misdirection Plays
by George Neumayr
At Large
The End of the Democratic German Revolution
by Doug Bandow
o
Sign Up to receive Our Latest Updates! Register