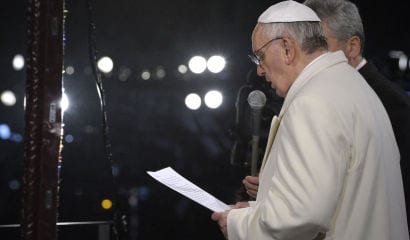 Last week we learned from Pope Francis that the Church is too preoccupied with the killing of unborn children and the destruction of the family. This raised the obvious question: If those issues don’t deserve top billing, which ones do? Pope Francis supplied the answer this week in an interview with an Italian atheist, Eugenio Scalfari:

The most serious of the evils that afflict the world these days are youth unemployment and the loneliness of the old. The old need care and companionship; the young need work and hope but have neither one nor the other, and the problem is they don’t even look for them any more. They have been crushed by the present. You tell me: can you live crushed under the weight of the present? Without a memory of the past and without the desire to look ahead to the future by building something, a future, a family? Can you go on like this? This, to me, is the most urgent problem that the Church is facing.

No, this is not an Onion parody. This is the Catholic Church, circa 2013, under the hope-and-change pontificate of Francis — the one Jon Stewart, Chris Rock, and Jane Fonda have been waiting for. They had long pined for an enlightened pope and now they have found him in a Latin American Jesuit so loose, so cool, so “spiritual”(celebrities always like a dash of “mysticism” in their liberalism) that he doesn’t fret over such fuddy-duddy anxieties as the killing of the elderly and the corruption of children (last week he reminded us that we shouldn’t see our culture as depraved) but rather their isolation and joblessness.

“Pope Frank,” as sites like Gawker now call him fondly, wowed his atheistic questioner, who burbled to the press afterwards that “the most surprising thing he told me was: ‘God is not Catholic.’”

God, it turns out, isn’t all that religious. But he is spiritual! In a passage that will make moral and religious relativists do somersaults, Pope Francis informed Scalfari that he needn’t trouble himself with the “solemn nonsense” of traditionalists who insist that he enter by the narrow gate. That’s all so pre-Vatican II. Salvation comes not by union with God but by union with self: “Each of us has a vision of good and of evil. We have to encourage people to move towards what they think is Good.”

“Your Holiness, you wrote that in your letter to me. The conscience is autonomous, you said, and everyone must obey his conscience. I think that’s one of the most courageous steps taken by a Pope,” said Scalfari. Yes, what could be more brave than telling modern man to follow his malformed conscience? How would he have known to do that otherwise? This, too, is evidently one of the fruits of the spirit of Vatican II: popes who have the guts to praise Jane Fonda’s conscience.

Pope Francis appeared to warm to this review of his courage: “And I repeat it here. Everyone has his own idea of good and evil and must choose to follow the good and fight evil as he conceives them. That would be enough to make the world a better place.”

Pope Francis let it be known that he is eager to run the ball into the end zone for team spirit-of-Vatican II, and now that small-minded, rule-bound restorationists like John Paul II and Benedict XVI aren’t around anymore to tackle him he has an open-field run. Listen to the implicit rebuke of his two predecessors in this paragraph:

I believe I have already said that our goal is not to proselytize but to listen to needs, desires and disappointments, despair, hope. We must restore hope to young people, help the old, be open to the future, spread love. Be poor among the poor. We need to include the excluded and preach peace. Vatican II, inspired by Pope Paul VI and John, decided to look to the future with a modern spirit and to be open to modern culture. The Council Fathers knew that being open to modern culture meant religious ecumenism and dialogue with non-believers.But afterwards very little was done in that direction. [Italics added] I have the humility and ambition to want to do something.

Under spirit-of-Vatican-II-style attitudinizing, the world enlightens the Church, not the Church the world. Anyone who is familiar with the cocky clichés of lightweight, dilettantish modern Jesuits will understand the import of this interview and hear all of its dog whistles: the praising of the late heterodox Jesuit Carlo Maria Martini, the politically correct sniffing at St. Augustine (“He also had harsh words for the Jews, which I never shared”), the condescension to saints of the past as products of their unenlightened times (as if Francis is not a product of his liberal times and liberal religious order; self-awareness is evidently not part of his “humility and ambition”), the Teilhard de Chardin-style jargon (“Transcendence remains because that light, all in everything, transcends the universe and the species it inhabits at that stage…”).

Were St. Ignatius of Loyola alive today, he wouldn’t recognize Francis as a Jesuit. He might not even recognize him as a Catholic. For all of his chirpy talk about a personal relationship with Jesus Christ, Francis speaks like a subjectivist, for whom religion is not something received from the triune God but something created from within, which is the hallmark of modernism, from which the spirit of Vatican II sprung. How else to explain a pope who tells an atheist to seek salvation by following what he considers “the Good”?