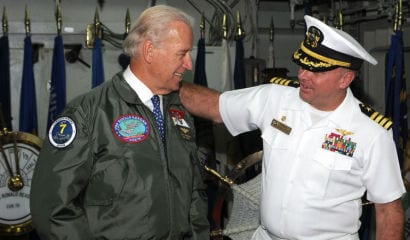 “The president’s continued adherence to [SDI] constitutes one of the most reckless and irresponsible acts in the history of modern statecraft.”
— Senator Joseph Biden on Ronald Reagan’s Strategic Defense Initiative, designed to protect against nuclear attacks from nuclear armed enemies like North Korea

“Secretary of Defense Chuck Hagel said the U.S. will add 14 interceptors to the 30 in its missile defense system by fiscal 2017, sending a signal to North Korea after the totalitarian regime threatened nuclear strikes.”
— Bloomberg Business Week on the Obama-Biden Administration decision to belatedly deploy an underdeveloped SDI against a potential North Korean attack

Joe Biden had a headache.

Now, America has a headache. A big one, too.

That would be the threat of a nuclear attack from North Korea.

Back in the wayback of March, 1987, Senator Joe Biden was busy running for president. What’s remembered, aside from his plagiarism problem, was that the young Senator was in the middle of a speech to a New Hampshire Rotary Club audience in Nashua when he was stricken with a shooting pain in his neck and had to stop in the middle of his speech. After a time-out, overcoming a feeling of nausea, the Senator returned to the podium and with difficulty finished his speech. It turned out that Biden had suffered from an aneurism, which he would need surgery to fix.

The surgery was successful, the rest of the Biden story to date is known as the now-vice president sits as the number two in an Obama Administration that is today coming to grips with the actual threat of a nuclear attack from North Korea.

Which is to say: North Korea nukes Hollywood. And potentially a bit of California or the rest of the West Coast.

What’s forgotten in the tale of Biden’s aneurism-induced headache was the topic of his speech that winter day in Nashua:

An attack on the Reagan Strategic Defense Initiative.

Or, as Biden and his fellow liberals of the day disparaged the President’s idea of defending the United States by hitting a missile with a missile – Star Wars.

March 23 of this year – two days from now – marks the 30th anniversary of President Reagan’s historic speech announcing his intention to pursue a “Strategic Defense Initiative.”

As the Heritage Foundation noted five years ago on the occasion of SDI’s 25th anniversary, Reagan had three core principles at the heart of SDI.

Said Reagan in announcing his idea:

“We are launching an effort which holds the promise of changing the course of human history.”

Indeed. Which is precisely what infuriated Biden and his liberal allies.

What so offended Biden was that Reagan was making a direct challenge to the liberal sacred cow that was nuclear deterrence doctrine – mutual assured destruction. Or MAD as its appropriate acronym had it. In short, the liberal idea – the conventional wisdom of the day – was “if you kill us you will die too.”

Reagan was appalled at this thinking – and had no hesitation in challenging the conventional wisdom. It is hard to realize now how much the idea of “arms control” had essentially developed into a liberal religion, its practitioners considered more priests than bureaucrats.

As history now records, SDI became a central player in ending the Cold War. It was SDI that brought the Reykjavik Reagan-Gorbachev summit to an abrupt end as Gorbachev sought to effectively end the program. Reagan would have none of it, and walked out rather than be pressured to stop SDI.

None of this impressed Biden, although he was shown to be demonstrably wrong. Thus his opposition to the program continued through the years.

By the time George W. Bush arrived in the White House to keep SDI moving, Biden was still doing his best to thwart the program.

As the Senate Foreign Relations Committee Chairman, Biden called a July 24, 2001 hearing on a Bush budget request for $8 billion in SDI research.

Biden made plain his opposition, opening the hearing with a reference to a Wall Street Journal editorial on SDI that referred to Biden as “Dr. No.”

The then-Senator immediately raised the Bush administration’s specific insistence that at some point in the future North Korea could have a nuclear missile and threaten to use it against America.

Biden ridiculed the very notion of this possibility. He was nothing if not an avid believer in the sanctity of the arms control priesthood. To push forward SDI was an attack on arms control, said Biden and he would have none of it.

export of long-range missiles? For if there were no immediate possibility of North Korea having the capacity to launch a long-range missile to strike the United States, there would be no need to initiate a test program that in the minds of some experts is of questionable utility and costs billions of dollars…

North Korea should be dealt with by “a diplomatic solution” because the very idea of North Korea attacking the U.S. with a nuclear missile wasn’t “real.”

So it came as no surprise that in 2012 as Vice President Biden, the eternal Senate critic of SDI was presiding with President Obama over requested SDI budget cuts to the tune of $810 million in 2013 with projected cuts of $3.6 billion over the next five years.

Then… then… with all the predictability of the sun rising in the East, the North Korean threat Biden insisted wasn’t there suddenly appears.

So, of course, the Obama-Biden administration is now in a mad scramble.

The United States will deploy additional ground-based missile interceptors on the West Coast as part of efforts to enhance the nation’s ability to defend itself from attack by North Korea, Defense Secretary Chuck Hagel announced Friday.

Still relatively new in his post, the Pentagon chief told reporters that 14 additional interceptors to be installed by 2017 would bring the total to 44. It is part of a package of steps expected to cost $1 billion, officials said.

“The reason that we are doing what we are doing and the reason we are advancing our program here for homeland security is to not take any chances, is to stay ahead of the threat and to assure any contingency,” Hagel said.

… Part of the move announced by Hagel would involve reopening a missile field at Fort Greely, Alaska.

In 2011, the Pentagon mothballed Missile Field 1, acting on direction from the Obama administration. Instead of permanently decommissioning it, the Defense Missile Agency placed it in a non-operational state.”

So this defense will be in place “by 2017.” Which is to say four years from now.

And say again, Secretary Hagel, why is this suddenly urgent $1 billion infusion into missile defense needed? Why was the missile field in Alaska being reopened – after being “mothballed” by a Pentagon “acting on direction from the Obama administration”?

A threat? From North Korea? But how could this be? What happened to those diplomatic efforts then-Senator Biden said would defuse North Korea? If the VP wants to take some non-sequestered travel, why isn’t he in Pyongyang hanging out with Kim Jong-un instead of Dennis Rodman?

When one cuts to the chase here, what’s at play is the liberal mindset on national security issues. There is nothing new with Biden – or the now highly predictable results of his lack of common sense about the threats to the United States and how to deal with them.

Biden’s record as a senator included his support for the nuclear freeze, cutting off funding for the Vietnam War (launching the infamous killing fields of Cambodia and the murderous overtaking of South Vietnam by the North), opposing the first Gulf War in 1991 and so on… and so on… and so on.

Now, as the sitting Vice President of the United States, the irony is that the Biden chickens are coming home to roost. North Korea is in fact threatening America with nuclear missiles, and now the U.S. government has to scramble to reverse the damage done to American missile defense done by Biden’s work.

Will there be a war with North Korea? Will Californians and others on the West Coast suddenly find themselves watching their televisions and computers in horrified fashion as a North Korean missile flies towards them, making of Hollywood or San Francisco the new Israel? Their citizens nervously scanning the sky for incoming?

But if in fact this scenario plays itself out, it’s safe to say that whatever else follows will have a name: