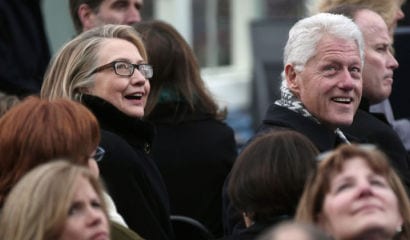 Following her husband’s lead, Hillary Clinton has shifted from opposing gay marriage to endorsing it, a complete reversal from both Clintons’ support of the 1996 Defense of Marriage Act, which defined marriage as between a man and a woman, and was signed into law by President Bill Clinton. America’s progressives hope that enough Supreme Court justices will join them in merrily jettisoning this antiquated law and multi-millennial-old institution.

Like her husband, Mrs. Clinton now fancies herself a “progressive.” It’s funny, I wrote an entire book on Hillary Clinton, where I dealt with her position on gay marriage at length, and not once did I hear her refer to herself as a “progressive.” She had been a liberal, a Democrat, an occasional moderate, and once even a Goldwater girl. But a “progressive”?

Well, that’s just as well. The progressive tag fits best, as it does for most liberals. Very few actually match the term “liberal,” a problematic label. “Progressive” fits better. After all, that’s what these leftists are doing: they are ever evolving, reforming, changing, moving, progressing along to something. Their positions are forever in flux, with the only commonality being that they favor more government power and centralization to handle anything they consider an injustice. The evolution across issues is so vast, and so unceasing, that no progressive can tell you where they will stand years from now. They merely know that they’ll be progressing.

The marriage issue is an excellent case in point. No progressive 100 years ago could have imagined their ideology and Democratic Party embracing gay marriage. Woodrow Wilson and William Jennings Bryan are rolling over in their graves.

Gee, merely a decade-and-a-half ago, the entirety of the Democratic Party supported traditional marriage, codified under law. And yet, Democrats turned on a dime in faithful obedience to Barack Obama’s mountaintop-message sanctifying gay marriage a year ago.

Obama promised “change” and “fundamental transformation.” His legions of blind faithful roared in approval, projecting upon his blank screen whatever they vaguely had in mind. In Obama’s mind, this included bestowing unto himself the monumental ability to literally redefine marriage, granting himself and his government a power heretofore reserved for the laws of nature and nature’s God.

(In an equally breathtaking development, libertarians have jumped on board, generously lavishing upon government — which they claim to want to limit — an enormous and unprecedented power.)

As for the Clintons, consider their change, their fundamental transformation, their progress on this bedrock issue:

As noted, in 1996, Bill Clinton signed the Defense of Marriage Act. The Arkansas Baptist stood for marriage as always understood.

As for Hillary, the lifelong Methodist was once firmly in the camp of not rendering under government the ability to redefine marriage. Her youth pastor and mentor, the Rev. Don Jones, once said: “Surely, she is for gay rights…. But I think both she and Bill still think of heterosexuality as normative.”

Yes, they did. Campaigning for the U.S. Senate in 2000, Hillary held to that position, to the consternation of gay-rights groups. In White Plains, N.Y., in January 2000, Hillary stated: “Marriage has historic, religious and moral content that goes back to the beginning of time, and I think a marriage is as a marriage has always been, between a man and a woman.”

That was pretty clear, as was this Hillary remark to New York’s WNYC in June 2003: “marriage … should be kept as it historically has been.” She reaffirmed that position throughout the 2008 Democratic primaries.

Alas, jump ahead to this week, where a beaming Hillary proudly proclaimed: “LGBT Americans are … full and equal citizens and deserve the rights of citizenship. That includes gay marriage.”

Are you with me?

Thus, here lies yet another crucial illustration of why progressivism is a disaster. It means, or has to mean, that the Clintons’ position on gay marriage was never right. It was always in a state of progression to where it is now. And yet, the Clintons never knew, at any point, that their position was wrong.

But here’s the kicker: How can the Clintons — or any modern progressive, for that matter — know that they’re right now? How do they know they’ve progressed to the final “correct” point on marriage? Or are they still progressing to whatever that magical point might be? Progress, after all, never stops progressing. And so, for progressives, where’s their next redefinition in the ongoing process of redefining marriage? Does the evolution end with one man and one woman, or one man and one man, or one woman and one woman? Why could it not next progress to one man and multiple women? Could it involve an adult and a minor? Could their evolving redefinition of marriage include married first cousins or a parent and child? Could it include multiple homosexuals or heterosexuals in single or even joint or group spousal relationships?

The answer: progressives, by their very definition, cannot answer you.

We do know, however, that progressives (with the support of libertarians) are happy to do with marriage what they do with everything: give it over to the federal government. That much we know. Render under government what is government’s; that’s really the progressive credo. And what is the province of government? It’s anything that progressives decide it to be.

As for Bill Clinton, a loyal Democrat who once assured us “the era of big government is over,” he’s on board for the grand project.

Hey, I’m not surprised. I’m never surprised by anything these folks do.

As for conservatives, the world at least knows where we stand: we look to tradition, to Biblical law, to Natural Law, to worthy and time-tested things that have upheld because they work — not to the past for the sake of the past, but to the past for the noble values that endure for good reason. There, we see marriage best as it has been since the Garden of Eden. As a liberal or progressive, you can take issue with that, but at least we conservatives can tell you our end-goal, our ideal. Progressives cannot.

And that, ladies and gentlemen, is a train-wreck of an ideology, with literally no end to its havoc. It is currently careening into the most fundamental building block of human civilization: the family.

Let the wreckage begin, as America’s “fundamental transformation” continues. We can thank not only the progressives and their latest fashionable interpretation of “progress,” but the stunningly naïve millions of duped traditional Democrats who blindly pulled the lever for this madness.