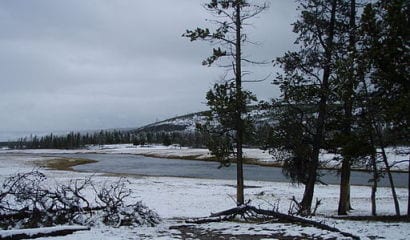 It snows a lot in the Rockies, even in relatively dry years, and some of the western national parks, such as Yellowstone, Glacier, and Rocky Mountain, require extensive plowing to open their roads in the spring. Yellowstone, for instance, closes winter access to snowmobilers and cross country skiers around March 1 to begin plowing.

It takes up to two months to accomplish this task, as it continues to snow at high elevations through the spring. Canyon Village routinely shows ten-foot tall snowbanks to tourists in the parking lot in June. Yellowstone has 370 miles of roads at various elevations. Both Dunraven and Sylvan passes are difficult to open, the latter due to avalanches, and demand the employment of heavy-duty rotary snowplows and bulldozers. Yellowstone crews are also responsible for the 70-mile-long Beartooth Highway (U.S. 212), outside the Park, which connects the Northeast Entrance at Silvergate, Montana, with Red Lodge, Montana, after dipping back into Wyoming and crossing 10,947-foot Beartooth Pass.

The National Park Service (NPS) has seen the typical 5% across-the-board sequestration budget cuts, and according to USA Today a recent memo from the office of NPS Director Jonathan Jarvis stated that — among other budget pains — a thousand fewer seasonal employees (10%) will be hired this year, and a $12 billion park system-wide maintenance backlog will worsen. In Yellowstone, the sequester delayed the start of spring plowing from March 4 to March 18. This saved the Park approximately $300,000, or $30,000 per workday, but would extend some entrance opening dates from early-May to mid-May. In 2012 Yellowstone spent $962,000 clearing roads inside the national park, and $178,000 to plow the farther-removed Beartooth Highway. In 2011, a snowier winter, the costs were $1.2 million and $316,000 respectively. The rule of thumb is $5,000 per mile.

A recent story in the Washington Post told us that Yellowstone Superintendant Dan Wenk had faced a number of unpleasant options. The superintendent “could slash the ranks of 430 seasonal rangers, guides and other employees.… He could halt a bison management plan, but the program is required under a court settlement.… He could close the Park for two weeks before the fiscal year ends on Sept. 30…. He could freeze all permanent hires, delay the snowplows and open most entrances two weeks late.” Wenk chose the hiring freeze and late opening options because, as the Post writer put it: “The sun would eventually melt and soften the snow.”

Meanwhile, Wyoming Governor Matt Mead, after conferring with federal and state officials, offered a solution. Governor Mead has proposed using Wyoming Department of Transportation (WYDOT) equipment and personnel to assist the opening of park roads as long as “it doesn’t require state funds to do it.” Mead told the Associated Press. The Chambers of Commerce in the “gateway” communities of Cody and Jackson, Wyoming, are expected to contribute financially to the effort.

The Cody Chamber has started soliciting donations from its 575 members, with the goal of raising $100,000 by April 1, a sum that, at $5,000 per mile, would plow 20 miles in from the East Entrance. “We’ve had great enthusiasm,” Cody Chamber director Scott Balyo told the Cody Enterprise. With ten days yet to go before the deadline, the Cody group has raised $29,000 from members that will be matched by Chamber funds for a total of $58,000 so far.

The Jackson Hole Chamber of Commerce has already raised $56,000 of the $70,000 required to cover the cost of plowing the John D. Rockefeller, Jr. Memorial Parkway through the South Entrance from Flagg Ranch to Grant Village inside Yellowstone. “To the extent that they need more money they will certainly get it,” Jackson Mayor Mark Barron told AP. “The community is very fired up about getting Yellowstone opened up.” This last is a testament to the importance of Yellowstone to its region’s economic fortunes.

While the locally sponsored plowing probes the eastern and southern routes into the Park, the sequester-delayed crews will focus on the interior roads. The object of the local effort is to neutralize the effects of the sequester on Yellowstone’s opening dates and it will likely succeed. The East Entrance will probably open May 3, instead of May 17, thus ensuring that Cody hotels and restaurants avoid an economic hit. Last year 11,000 visitors passed through the East Entrance during the first two weeks of the season to brave Yellowstone’s mercurial spring weather. The South Entrance will also likely open on time on May 3. Beartooth Highway plowing begins in April with the usual annual goal of opening the road on the Saturday of Memorial Day weekend.

“This is a uniquely Wyoming solution that benefits the entire country because it gives the public the access to Yellowstone it has typically enjoyed….” Governor Mead said in a written statement. “This is also a win for Wyoming’s economy because businesses can start hiring on time and providing jobs that people and communities count on.”

So much for sequestration. Matt Mead and Co. are to be applauded.