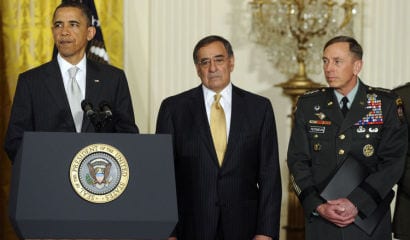 In July 2011, then Secretary of Defense Leon Panetta was quoted in the New York Times as saying that the defeat of al Qaeda was “within reach.” The Obama Administration has used this line effectively to suggest terrorism and al Qaeda are one and the same. The objective has been to equate any demise of al Qaeda with the end of terrorism, as a result of the current White House’s programs.

This issue has come to the fore in an atmosphere of growing public debate over whether the post-Bin Laden organization really continues to have relevance or is now merely a symbol. In any case, the Obama administration wants “Bush’s Global War on Terrorism” over and done with. Shortsightedly many on the left believe global peace will follow a recognition that radical Islamic terrorism is no longer a threat — and that this is a precursor to the overall end of terrorism of all kinds as a danger to world peace.

How convenient this self-created logic is. Regrettably terrorism has many forms and motivations. Individuals alone or part of an organization who believe they are without recourse against real or perceived injustice find they have a ready weapon in taking action directly or symbolically through terrorist acts. It’s equally obvious that terrorism is sometimes utilized simply for material gain. It really doesn’t matter whether there is a spiritual or secular justification to these actions of the self-characterized oppressed.

Terrorism as political warfare instrument will last long after al Qaeda is a memory or — at the very most — a theme of revolution attracting Muslims and non-Muslims alike. Osama bin Laden as a martyr is an attraction for radicals of all stripes. It is not too far a reach to envision OBL joining Che Guevara and Chairman Mao as symbols of socio-political revolt rather than as simply the late leader of a radical Sunni anti-establishment group seeking to regain the historical dominance their Islamic empire once had. The weapon of terrorism is always available. That’s why declaring al Qaeda vanquished — or even substantially diminished — is of limited value other than to further a partisan political ambition.

There was a time when the money-raising capabilities of al Qaeda were touted as one of the strengths of the terrorist group. In recent years fundraising has become extremely difficult. Even before bin Laden’s death it was becoming increasingly difficult for al Qaeda to maintain its organized international network of safe houses and support personnel — to say nothing of providing the logistics necessary for operations and operators. The current franchise structure is forced for the most part to maintain itself, yet large and small cells claiming jihadi intentions spring up depending increasingly less on individual donors and more on illicit activities. Extortion, kidnapping for ransom, robbery, and drug smuggling appear to lead the current list.

These evolving local groupings are increasingly important in the U.S. and the West’s counter-terrorism efforts. Drone attacks on individual jihadist-related targets have been key, and it is these “executive actions” that the American administration is really pointing to when its speaks of degrading al Qaeda assets. Leadership in terrorist groups of all kinds, however, tends to be quickly replaced and replenished. At the same time the various terrorist units do not appear to seek to establish and support a central governing body such as Osama bin Laden originally envisaged in al Qaeda. This diversity actually hinders the forces operating to counter terrorist actions and organization. Analysts are constantly looking for signs of who will be the next leaders, but now the development areas are considerably beyond the original sites in the Middle East.

Islamic terrorists may want to be regarded as “soldiers of Allah,” but in the end they are no different than the “turf-protecting,” illegal gun-running, drug-dealing, and human-trafficking cartels of Mexico, Afghanistan, the “golden triangle” of Burma, Laos, and Thailand. To these one can add the many criminal groups such as MS-13 and the gangs of Chicago and L.A. operating throughout the United States and elsewhere around the globe.

The lesson to be learned from all this is that terrorism as a weapon has changed little over the years. To paraphrase Walter Laqueur: The specific targets of terrorism have changed and so have the origins of the terrorists. But the overriding message of hate remains unchanged. All American administrations have to bear that in mind.