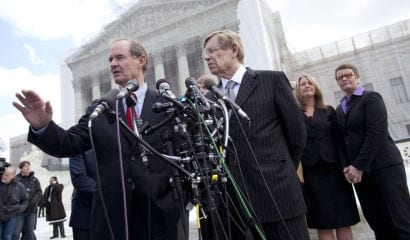 A country that stakes its future on lies will not have one. The fashionable lie of the moment is “gay marriage.” The push to deprive children of mothers and fathers for the sake of “genderless” marriage has never been stronger. The media propaganda about its “inevitability” is unremitting. One would think, judging by all the triumphant rhetoric heard this week, that over 30 states had approved it. In fact, over 30 states have banned it.

According to the Washington Post, which just a few weeks ago was categorizing Christians as racists, the issue is all settled and done. Like a paid-off ref who calls a game in the second quarter for the trailing team, the Post declares that no “matter how the high court rules later this year on California’s Proposition 8 and the Defense of Marriage Act, one thing is already clear: The political debate over gay marriage is over.”

Beltway pundits, whose powers of clairvoyance didn’t even extend to the Romney race, are supplying reporters with the sort of quotes they want to hear about how the “tide” is irreversible. “Quite literally, the opposition to gay marriage is dying off,” pronounces columnist George Will, whose last great prediction was that Romney would win in a 321-217 landslide.

It is curious that bow-tied classicists are now taking their moral cues from college students. What repositories of wisdom youth have suddenly become. Here is one recent headline, which captures our teen-besotted moment perfectly, “Portman’s Gay Son: Dad’s a Good Man and I’m Proud of Him.”

One would think George Will, given all his throat-clearing about the preservation of Western civilization, might feel some embarrassment at seconding this pathetic culture in which college students provide moral tutorials to their mothers and fathers on how tots don’t need mothers and fathers.

Nicole Wallace, whose brilliance and clairvoyance led her to back John McCain in 2008, told Fox News that the universal triumph of gay marriage is so certain that “there will be nobody left to book on a show like this to debate both sides of the issue.” What a heady prediction: Not a single opponent of gay marriage will dare debate the issue in a few years? Wallace did, however, graciously inform her debating opponent on the show, Gary Bauer, that the GOP was big enough in the meantime to house her enlightened views and his outmoded ones.

Karl Rove looks into his cracked crystal ball and sees a gay-marriage supporter who could win the 2016 Republican presidential primaries. “I could,” he told ABC. Of course, if the GOP stays in the hands of the Roves, that prediction could come true. As Politico has reported, the GOP consultant class is in the tank for gay marriage: “a throng of top Republican politicos signed an amicus brief urging the Supreme Court to support a constitutional right to gay marriage. Among them were a half-dozen senior aides to Mitt Romney’s 2012 presidential campaign…”

In the 1970s, the crack GOP consultant class urged Republican officeholders to back the Equal Rights Amendment. And many of them did. ERA passed through the House and Senate with Republican approval. Two Republican presidents, Richard Nixon and Gerald Ford, supported it. Despite the clairvoyance of the consultants, ERA failed, foundering at the state level.

Notice that the “inevitability” argument for gay marriage is coming from Beltway elites who want judges to decide the issue. Why are they waiting at the back doors of court houses so anxiously if public support for it is so strong? Why do they try and shut down debate so quickly by branding their opponents the moral equivalent of racists if their case is so manifestly clear?

At Tuesday’s Supreme Court hearing, Justice Samuel Alito, trying to calm the elite herd down, noted that cell phones have been around longer than gay marriage laws. Justice Scalia asked Ted Olson, the lawyer who seeks to overturn Proposition 8, when gay marriage crept into the Constitution as a right: “We don’t prescribe law for the future. We decide what the law is. I’m curious, when did it become unconstitutional to exclude homosexual couples from marriage? 1791? 1868? When the Fourteenth Amendment was adopted?”

Olson couldn’t give a date, to which Scalia replied: “Well, how am I supposed to know how to decide a case, then, if you can’t give me a date when the Constitution changes?”

This exchange highlights what a sham these cases are, and explains why gay-marriage activists don’t want a prolonged debate but a Roe-style judicial coup.

A lie, even if judicially decreed, remains a lie and provides no future for a country forced to swallow it. Plenty of regimes that no longer exist once thought themselves on the “right side of history.” The Romans, at the height of their decadence, saw the Roman empire as indestructible. It ended in ruins. Reality takes revenge on the deluded.