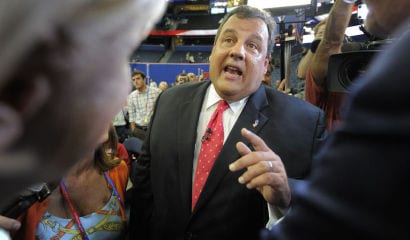 On a clear day, you can see M. Stanton Evans at CPAC.

The guy is faster than he looks, so be prepared to keep up, and don’t divert your gaze.

But if he remains stationary just long enough, and if you ask the right questions, Evans can channel the memory of Richard Nixon and the first, early steps of the modern conservative movement. This matters because the ideological fissures that beset today’s Republican Party were also evident when conservatives began to coalesce around Ronald Reagan in the early 1970s.

Just as President Nixon’s shift to the left became a source of consternation for conservatives who had previously supported him, a growing number of right-leaning Republicans have become disillusioned with Gov. Chris Christie of New Jersey. He was widely touted as a potential presidential candidate in 2012 after prevailing over the teachers unions to implement budget, pension and education reforms that were considered unthinkable just a few years ago. Unlike his predecessors, Christie has also moved aggressively to reassert constitutional restraints on the New Jersey Supreme Court, which is among the most activist and far-left in the entire country. So, he does get points for cutting against the grain in what is after all a very blue state.

But his effusive embrace of President Obama in the aftermath of Hurricane Sandy along with his support for certain gun control measures have antagonized many on the right. Some have even suggested that Christie helped to re-elect Obama casting him in the role of Judas, the apostle who betrayed Jesus.

Above all else, it was Christie’s hard push for the Hurricane Sandy relief bill that made an appearance before this year’s CPAC untenable, Al Cardenas, chairman of the American Conservative Union (ACU), told the Washington Times in an interview.

“We felt that the governor’s tone and attitude regarding this relief bill, which was really a pork bill, did not justify an invitation to the conservative conference and we took a pass this year,” he said.

This view was widely shared by rank-and-file CPAC attendees who spoke with TAS. Sarah Rumpf, a native of Orlando Fla., said it was important to maintain a healthy separation between the Republican Party and the conservative movement.

“While I admire Chris Christie for his budget cutting, and his battle against the unions in a blue state, he behaved in a way that was not positive for conservatives,” she observed. “His temper tantrum over Hurricane Sandy and relief money was revealing. It was not unreasonable to delay the bill because taking the pork out is what conservatism is all about.”

Rumpf who now resides in Austin, Texas, operates “Sunshine State Sarah,” a conservative blog that needles Republicans who have drifted away from conservatism. But where Rumpf sees an apostate, Ben Dworkin, a political science professor with Rider University in Lawrenceville, N.J., sees a shrewd, calculative politician who must placate two very difference audiences: one at the state level, one at the national level.

“Chris Christie’s future begins with his re-election,” Dworkin said. “2016 does not become a reality unless he wins re-election this year, and wins big. He is the most conservative chief executive New Jersey has seen in modern times. But the fact he is getting flak from CPAC, despite his conservative record, actually helps him to be appear as a moderate. In a state like New Jersey, that’s helpful.”

The first CPAC held in 1974 at the Mayflower Hotel in Washington D.C. coincided with the Watergate scandal that ultimately brought down President Nixon. As the original ACU chair, Stan Evans presided over the conference until he stepped down in 1977.

“There were about 500 of us at the Mayflower that first year and Watergate dominated the discussion,” he recalls. “It was a very Reaganesque affair. He was serving in his second term as governor of California and his participation was very important to the success of CPAC. On this question that has been raised as to how inclusive the conference should be, there was no doubt in our mind that it was not supposed to be some kind of kumbaya. We knew our mission, it was to conservatize the Republican Party, and it worked.”

But not without some heavy lifting.

Evans, a prolific author and a close confidant of William F. Buckley Jr., emerged as an early critic of President Nixon’s leftward drift. He described the long journey away from Rockefeller Republicanism to Goldwater conservatism during a panel discussion organized by the Intercollegiate Studies Institute (ISI). Nixon, said Evans, was “the quintessential moderate” out to constantly placate the moderate wing of the GOP. Although he had ingratiated himself to conservatives for role he played as a congressman in exposing Alger Hiss, the State Department official accused of spying for the Soviet Union, Nixon as president yielded too much ground to the left, especially on domestic policy, Evans explained during his talk.

The joke is famous.

“I always like to say, I didn’t support Nixon until Watergate,” Evans told CPAC listeners. “I had other problems with him. After wage and price controls, and [the creation of] the Environmental Protection Agency (EPA), affirmative action, détente [with the Soviet Union], the visit to Red China, and on and on, to me after all that, Watergate was like a breath of fresh air, I supported Watergate.”

While Nixon was not “as philosophically rooted as Reagan,” his commitment to anti-communism went a long way, Paul Kengor, a Grove City College political science professor, said in an interview. “Nixon maintained a permanent bond with the right over the Alger Hiss affair that could never be broken. It was Hiss that helped to make him president, and it was the Hiss case that ultimately lead to Watergate. That’s the irony.”

“That part about him being pragmatic is really spot on,” Kengor observed. “He had political cover to move left because of Hiss and he used it.”

Where Nixon had Hiss, Gov. Christie has the New Jersey Education Association (NJEA). With 200,000 members and $100 million in dues income ($760.00 in annual dues for a full time teacher), the NEA state affiliate makes and breaks state officeholders. But not Christie. In addition to implementing pension reforms that require union members to pay more for their benefits, he has turned the annual school budget election into a referendum on fiscal conservatism and public employee perks. When a union official in Bergen County, N.J. endorsed a “prayer” that implied he would like to see the governor dead, Christie moved quickly and aggressively to put the NJEA and Barbara Keshishian, its sneering president, on the defensive in the news media.

Anytime a Republican governor perseveres against the power and influence of public employee unions in a blue state, he earns nationwide credit and praise from the right. But it’s still a tough crowd at CPAC.

Ron Pearson, executive director of the Conservative Victory Fund, told TAS that organizers made the right call in resisting the New Jersey governor.

Looking ahead to 2016, Phil Kerpen, president of American Commitment, expressed concern that CPAC could be used to boost a candidate who is too moderate in his eyes.

“I understand that he’s the governor of a blue state and that he has to govern in way that we need to give him some allowances,” Kerpen said. “But he’s being touted for national office. We should not serve as enablers of this movement. The establishment will back him as the anti-conservative candidate, so why give him a platform.”

Given where Christie now sits politically, John Mitchell, the attorney general to Richard Nixon, may have had the comment most appropriate to the moment: “watch what we do, not what we say.”

While Christie may sometimes posture in favor of liberal positions on guns, for example, the output of his policies is largely conservative, insists Ben Dworkin, the Rider University professor. Moreover, it is important to point out that unlike many prominent Republicans from the northeast, Gov. Christie is pro-life and he’s also against gay marriage.

“You don’t have to be the most right-wing candidate to win the Republican primary,” Dworkin said. “But you do have to be credible. 2016 is still a long way off and I suspect you may see Christie make an appearance at CPAC before that time.”

There’s a Stan Evans joke in there somewhere.