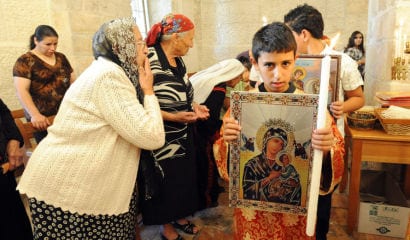 It’s rarely if ever fashionable among Western elites to focus on persecution of Christians. According to secular and leftist mythology, Christians are habitually the persecutors and imperialists. Victims groups are typically non-Christians. But today most Christians are outside the West, in the East or Global South, where hundreds of millions are routinely vulnerable to oppressive regimes and/or hostile movements. The largest persecuted Christian group is in China. But persecution of Christians is most ascendant against Christians in majority Muslim countries.

“Churches themselves don’t take notice sometimes,” Nina Shea sadly observed about persecution of Christians. “Not too many people paying attention.” And “political correctness has grown even in churches.” She contrasted today’s indifference to the wide coalition of the 1990s that rallied for global religious liberty, which led to the International Religious Freedom Act, mandating that U.S. foreign policy prioritize the issue. That coalition had been led and cheered on by, among others, evangelical leader Chuck Colson and New York Times columnist A.M. Rosenthal, both now deceased.

The indifference and ignorance even within American churches is compounded by little knowledge that significant Christian communities even exist in majority Muslim countries, Paul Marshall noted, much less that they are increasingly under siege.

Although persecution of religion in China perseveres, it fluctuates, and is not exported by the regime, as by Islamists, Marshall observed. Much of global Islam is radicalizing with transnational aspirations that bode ill for Christians and other religious minorities. He cited hundreds of attacks on churches in Indonesia, showcasing the “intensity and spread” of radical Islam where there had been relative tolerance. Mali, which once ranked higher than France in religious freedom, is now victim to al Qaeda-aligned Islamists. The targets for radical Islamists are not only religious minorities but also many Muslims deemed insufficiently zealous in their faith.

Even U.S. citizens who are persecuted for their faith overseas are not a typical priority for the U.S. Government or the media, Shea observed. Pastor Saeed Abedini, a U.S. citizen and ethnic Iranian who returned to Iran, has been imprisoned and tortured there for 6 months because of his Christian ministry. It was not until March 22, in a statement issued very late on a Friday, that Secretary of State John Kerry publicly called for his release.

“I am deeply concerned about the fate of U.S citizen Saeed Abedini, who has been detained for almost six months and was sentenced to eight years in prison in Iran on charges related to his religious beliefs,” Kerry wrote. “I am disturbed by reports that Mr. Abedini has suffered physical and psychological abuse in prison, and that his condition has become increasingly dire.”

Oddly, Kerry never mentioned that the imprisoned pastor is Christian, although U.S. Government pleas on behalf of tolerance for other religious groups often cite the religion. Shea blamed a “misguided multiculturalism” that is unwilling to acknowledge Christians as victims and that thinks silence about radical Islam extends an olive branch that will earn good will. “It doesn’t work,” she said. “And it sends the wrong signal.” She noted that the U.S. sometimes will more strongly advocate on behalf of straying hikers than victims of religious persecution. And she faulted administrations of both parties, recalling Secretary of State Condoleezza Rice’s unwillingness to help besieged Christians in Iraq even while U.S. troops were still present. More recently, even during the U.S. troop surge in Afghanistan, the regime there closed that country’s last surviving church, joining their nation with Saudi Arabia as the only two countries with no publicly acknowledged churches.

Marshall warned that U.S. and Western hesitance to advocate on behalf of religious freedom “stifles debate in Islam and strengthens radicals.” And he warned. “If you want good things out of the Arab spring you can’t have blasphemy codes. You will not have democratic development without religious freedom.”

For sheer intensity, North Korea is the “worst place for being human and being Christian,” Marshall said. Not one of that country’s 300,000 Christians is free from persecution, he added. Shea noted that a North Korean can be shot for Bible ownership, that a Christian and his family can be imprisoned going back three generations, and that the country’s five open churches are “all fake, to fool the West.” She also mentioned Vietnam, where Christians’ plight is less severe, but where the communist regime is “bulldozing” monasteries and churches to replace them with “eco-tourism.”

Although Nigeria has 60 million Christians, one of the world’s largest Christian populations, Marshall cited it as the place of the most widespread Christian death, thousands having been killed, thanks to Islamist groups like Boko Haram operating in the Muslim majority north. The U.S. denounces this terror as “sectarian” clashes, but Marshall said they are more akin to “pogroms.” He noted the U.S. “doesn’t want to be seen as a Christian nation defending Christians.” And “America is hated because it is perceived to be Christian” by Islamist groups, whatever America’s self-perception.

Shea urged the U.S. to “use our leverage, putting conditions on foreign aid,” as a matter not just of humanity but also “national interest,” since “religious repression fuels instability.” The book, she and the other authors hope, will motivate Americans to informed action, she said, because “we can’t rely on political leaders to lead us, we need to lead them.” She and Marshall recalled the “amazing example” of mostly Christian South Sudan, which gained freedom from Islamist-ruled Sudan thanks to U.S. pressure that arose from concerted activism in the U.S. by religious and human rights groups in the 1990s. Compared to previous years of genocide there under Khartoum’s governance, there is today no reported religious persecution in South Sudan, while horrors in Sudan continue.

As moderator, Metaxas lamented the “lost concept of ordered liberty,” which facilitates “faux democracy.” You “can’t sprinkle democracy dust and have democracy,” he warned. And Lela Gilbert pointed out that tyrannical rulers are always “threatened” by Christians because they “bow to a higher authority.”

It can only be hoped that Persecuted: The Global Assault on Christians will awake at least a few Americans from their slumber about the millions of believers who routinely suffer for their faith. And in advocating on behalf of the persecuted, maybe Americans can recover their own sense of “ordered liberty.”