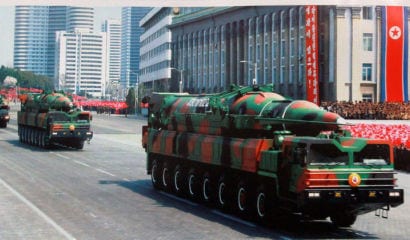 There is a tendency in press circles to characterize the new young leader of North Korea (Democratic Peoples Republic of Korea — DPRK), Kim Jong-un, of following in the irrational footsteps of his father and grandfather. The new Kim indeed has made bellicose statements after the passage of new UN sanctions, but this is not necessarily “irrational.” Such public posturing is consistent with past policy of Pyongyang that does not hesitate to threaten military action when it perceives its sovereignty has been questioned or even if it has not been taken seriously. In other words, it doesn’t take much to bring North Korea into a threatening posture.

The United States and South Korea (Republic of Korea — ROK) have been continual targets of the North who consider that the war of the early 1950s never really ended. For its part, Washington has tried to ignore each of the actions of the Pyongyang military, and have held back Seoul from retaliating. The most conspicuous non-reaction before the recent February DPRK nuclear explosion test, which came on the heels of new missile testing, was the 2010 sinking of the ROK warship, Cheonan, and the artillery strike on the South Korean island of Yeonpyeong.

Infuriated by the Security Council vote on sanctions, Kim Jong-un was recently pushed to the fore by his ranking political military handlers in several well-publicized visits to DPRK border troops — including the artillery unit that had hit Yeonpyeong . To the wildly cheering young soldiers he said, “War can break out right now.” South Korea’s female president, Park Geun-hye, warned in her first week in office, “North Korea’s recent nuclear test is a challenge to the survival and future of the Korean people, and there should be no mistake that the biggest victim will be none other than North Korea, itself.”

One of the most dangerous near term nuclear scenarios has been the explosion of a high altitude North Korean weapon over South Korea, effecting a vastly destructive EMP on the Republic of Korea’s electronic military command and control as well as all civilian electric power and communications facilities. South Korean military commentators, such as Kim Jin writing in Joon Ang Ilbo, have explained that their North Korean adversary already has that ability with its existing weaponry.

In this scenario there is no need for advanced miniaturization of the North’s nuclear weapon in order to provide less weight and greater range and accuracy that they would have to seek with a more sophisticated ICBM. The theory is that the massive DPRK Army would then launch a frontal assault on the South. The “trip wire” of 28,000 U.S. troops stationed in South Korea then would come into play and the Seoul government would expect a devastating American nuclear counterstrike.

This calculation of North Korean intentions would have to assume that Kim Jong-un’s regime is capable of complete irrationality and refusal to recognize the reality of its own assured destruction. The Pyongyang oligarchy of which the new Kim is merely the titular leader does not fit that description. These generals and close relatives of the Kim family have been expert risk-taking provocateurs in the past, but they seem to have a successful ability to calculate when to draw the line.

Washington and Seoul never have been able to clearly read Pyongyang’s intentions, and nothing much has changed in that regard. North Korean braggadocio reached a new and confusing level when it shifted to high gear in threatening to target the United States, with its current development of its ballistic missiles to be married with their nuclear weapon. This verbal assault was instigated in response to the well-publicized joint U.S./ROK military exercises. The lack of proportionality caused new concern, but a rumor spread that it also could be interpreted as Pyongyang wanting to create a new pressure for a formal peace treaty.

This peace treaty gambit appears to have been floated during confidential discussions between Beijing and Washington regarding the resumption of the six-power peace talks. The argument was presented that North Korea’s increasing nuclear and missile ability allows Pyongyang to begin the talks from a position of strength — a traditional DPRK negotiating ploy. As optimistic as such an analysis may be, it nonetheless provides a delaying device that serves well Pyongyang’s desire to continue to proceed with its advanced military preparations.

According to the International Institute for Strategic Studies (IISS), the North Koreans either have or are very close to having the missile capability of hitting U.S. territory. But IISS has indicated that the DPRK’s “functioning nuclear-tipped intercontinental ballistic missile is still several years away.” This is hardly an encouraging perception, but does explain the timing of North Korea’s negotiating position if what its really seeking is a peace treaty built on its military prowess.

Military dominance on the Korean peninsula always has been the DPRK’s ultimate objective. This may be a dangerous prospect, but not an irrational chess move when paralleled with a peace treaty. From the standpoint of the Kim family oligarchy, the main problem is whether any Washington administration has the ability to recognize a mutual advantage in the ploy.