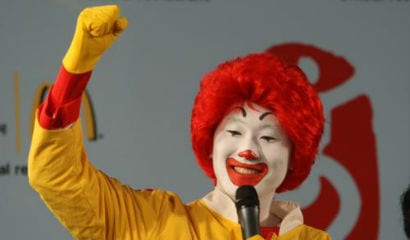 Starting June 1, upon entering a national fast food chain restaurant or before ordering via a drive-thru each patron must undergo a Body Mass Index (BMI) analysis. The score will determine portion sizes for adults and children and restrict the options available. Scores are: underweight, normal, overweight, obese and morbidly obese. Automated tickets issued from the machines will be color coded to alert servers of a patron’s options.

If a person is obese, for example, he or she will only be able to order sugar-free drinks and meals with a combined 500 calories. Those items will be color coded on the menu to make choices easily identifiable, according to Wendy Smith, a spokesman for the Department of Health and Human Services (DHHS), the agency that wrote the regulations. Those who wish to speed the process may apply for wrist bands, which will allow patrons to bypass the BMI calipers. Fingerprints will also be taken at checkout to ensure that those ordering receive one portion.

Cindy Dvorak, the former head of DHHS and CEO of Calipers for Change, the company chosen by the government to launch the new program said, “Our devices will quickly, accurately and discretely inform patrons of their fat ratio and help them take positive steps to achieve an appropriate weight and a fulfilling life.”

But not everyone is happy with the new rules.

The head of industry group Chain Restaurants of America said it will be filing a federal lawsuit against the regulations on Fourteenth Amendment grounds of unequal treatment under the law.

Fast food patron Joy de Cocinar admits she needs to lose a few pounds but does not want to be stigmatized by the new rules. She plans to visit her local fried chicken stand in Charlotte, NC, which is exempt from the regulations, more frequently instead of her usual Kentucky Fried Chicken to fulfill a weekly chicken and biscuits craving.

Indeed, local chain owners are already talking about dumping their affiliation with national brands. An owner of a McDonald’s in Kansas City who asked not to be identified said he was considering becoming MacDoodle’s to avoid the regulation.

The new rules follow years of increased regulation of food by Congress and federal agencies as Americans have grown ever larger. An estimated 36 percent of Americans are overweight and many of them obese.

Starting this year, for example, new refrigerators must come equipped with cameras in order to photograph the purchases of consumers and relay information to the DHHS where the images will be assessed by nutrition experts. Americans found in violation of the federally approved food pyramid will be referred to the agency’s armed food police. Police may confiscate food and impose fines up to $1000 on those deemed obese or morbidly obese found with certain high fat foods including ice cream, triple cream brie and bacon in their homes. All violators must go through a federally approved food counseling session run by AFSCME members.

A network of drones will assist DHHS in monitoring grocery store parking lots and driveways. Nutrition experts at the agency will also monitor the online “recipe boxes” of those with accounts on food websites to ensure that Americans are choosing the best meals for their families, among other measures.

Another law passed this year will require those buying clothes over a waist size 36 men’s and size 12 women’s (members of Congress excepted) to submit an Individual Health Excellence Life Plan  (iHELP) to DHHS and provide monthly updates on their progress in order to speed their achieving a federally accepted healthy weight.

Anti-obesity advocates credit former New York City Mayor Michael Bloomberg for making the new regulations possible. Mr. Bloomberg in 2015 successfully banned sugared soft drinks from Manhattan after a long fight and has been a leading advocate for the measures above. “As Mr. Bloomberg said, (note to editors: this is a real quote) ‘If we are serious about fighting obesity then we have to be honest about it and courageous about tackling it,’” said Albert Gored, the executive director of Freedom from Fat. “He is an inspiration for us all.”