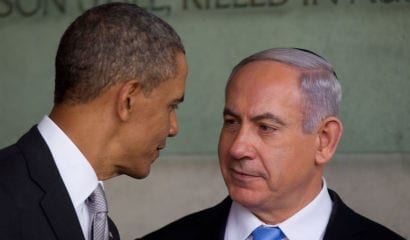 President Obama’s recent two-day visit to Israel surprised everyone. Instead of the surly, pro-Palestinian, Netanyahu-bashing leader that Israelis have come to know and dread, Obama presented himself as a warm friend of the Jewish State, a close ally of Benjamin Netanyahu, and someone who would never, never sell out Israel or undermine its security.

Remarkably, it worked. The Israeli public, desperate for a little TLC (Tender Loving Care) from the mighty American commander-in-chief, fell in love with Barack Hussein Obama. Ari Shavit, one of Israel’s leading commentators, called Obama’s  trip “a royal visit of love.” Chemi Shalev opined that “After Obama’s visit, it will be more difficult for his rivals to claim that he has Israel’s worst interests at heart.” And Alon Pinkas enthused: “U.S. President Barack Obama may well define his Israel visit with ‘Veni, Vidi, Vici’ — I came, I saw, I conquered.”

Most significant was the reaction of Moshe Arens, Israel’s 88-year-old former Defense Minister: “Those Israelis who predicted that a rancorous Barack Obama, having been reelected to his second term and freed of the pressures that weighed on him during the campaign, would now vent his anger on Benjamin Netanyahu, sold Obama short.”

Some of Israel’s staunchest American champions agreed with Arens. For instance, writing in the Washington Times, Daniel Pipes observed: “One key shift in U.S. policy was overlooked in the barrage of news about Obama’s eventful 50-hour visit to Israel last week. That would be the demand that Palestinians recognize Israel as the Jewish state, called by Hamas leader Salah Badawi ‘the most dangerous statement by an American president regarding the Palestinian issue.’”

Similarly, Obama’s most effective and implacable critic, Charles Krauthammer, also praised the president. Noting that Obama had called on Palestinian leader Mahmoud Abbas to drop his demand that for negotiations to resume, Israel must first call a halt to settlement building, Krauthammer wrote, “When an American president so sympathetic to the Palestinian cause tells Abbas to stop obstructing peace with that phony settlement excuse, something important has happened.”

Indeed, something important has happened. Recognizing that his efforts to prevent Iran from building a nuclear weapon are likely to fail, and that Israel might very well launch an attack on Iran’s nuclear facilities in the near future, Obama decided to pursue his most urgent foreign policy objective — preventing such an Israeli attack from taking place — through a charm offensive. Instead of bullying the Israelis, he showed that he is prepared to be a good and loyal friend of Israel (endorsing key Israeli diplomatic goals, pressuring the Palestinian side instead of Israel) provided the Netanyahu government agrees to leave Israel’s most vital security interest — preventing Iran from acquiring nuclear weapons — in his hands.

Readers of the Bible will recognize that Barack Obama essentially adopted the Lord’s approach to the Israelites, as laid out in Deuteronomy 30:19: “I call heaven and earth to witness against you this day, that I have set before thee life and death, the blessing and the curse; therefore choose life, that thou mayest live, thou and thy seed.”

Whether Netanyahu accepts Obama’s offer remains to be seen. One thing, however, has become clear as a result of Obama’s visit to Israel: Ronald Reagan wasn’t the only gifted actor to occupy the White House.

Doug Bandow
Follow Their Stories:
View More
Doug Bandow is a Senior Fellow at the Cato Institute.
Most Popular
1
At Large
The Lingering Fog of War and Lessons From Vietnam
by Mark Moyar