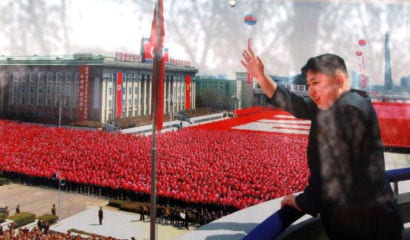 It’s hard to out-threaten the North Koreans. We criticize their nuclear weapons and missile programs. They say they’ll obliterate American bases abroad and cities at home. We ask the UN for sanctions, including some that could — shudder — cut off Pyongyang’s supply of Napoleon brandy. They abrogate the 1953 cease-fire agreement and say that a “state of war” exists between them and South Korea. They’ve even gone so far as to call the U.S. a “boiled pumpkin.”

Bellicose rhetoric from the Norks is nothing new. It’s a commonplace, though the pace of it — and the accumulation of it — over the past few weeks are not. Now we’re enduring the usual eruptions from the usual liberal suspects bemoaning what they see as a failure of U.S. policy.

There’s a whole lot wrong with that, because it starts with the conclusion, and the assumption, that we actually have a policy. So let’s work backwards: What would success for American policy toward North Korea look like? Why the long barrage of war talk? And how can we quiet things down?

Our policy toward North Korea — if we had one — would mirror the more rational policy we should have (and don’t) toward Iran. Both must be denied — in the case of North Korea, deprived of — nuclear weapons. Because neither nation can be talked out of their nuclear weapons, we will eventually have to take military action to topple their regimes overtly or covertly, or otherwise disarm them. But neither the Obama administration nor the American people see the need to act this decisively. So a successful American policy toward North Korea is not in the offing.

This may not be fatal, at least in the short run with respect to North Korea. North Korea’s missile and nuclear weapons programs haven’t developed to the point that they can credibly threaten a nuclear missile attack anywhere. We have time, but not a lot. That time can best be used to take advantage of North Korea’s — and Kim Jong-un’s — rather obvious weaknesses.

There’s a lot behind Kim Jong-un’s barrage of bellicosity. Some of these things we know, and some we can derive from other facts. First, the level of bellicose rhetoric coming out of Pyongyang is usually in direct proportion to the desperation the regime feels about its economy or national security. China’s economy isn’t doing very well these days, so they are probably reducing the support they send North Korea every month. North Korea, lacking an economy aside from its exports of nuclear technology and missiles, has to be hurt by any reduction. It’s not that Kim’s government cares whether regular North Koreans starve to death. But they need some level of aid to keep the lights on, fuel the trucks, and otherwise feed those who keep the regime alive and in control.

Second — and worsened by China’s aid cuts — is the apparent shakeout going on around the new Kim. Like his father and grandfather, his rule is dependent on the loyalty of North Korea’s generals.

What we don’t know is how unstable his government is and whether there is significant factionalization that could actually threaten his power. The only thing we can be sure of is that some of the bellicose rhetoric has, in the past, seemed to unify the regime around its then-current Kim. The late increase of that rhetoric may be an indication of difficulty in achieving that unification.

Third, it’s entirely likely that Pyongyang is scared. Think about it: at a time when they believe their war talk would give them great influence over the South and over us, the joint U.S.-South Korean war games that have been going on have made a laughingstock of all their threats.

The Norks expected more. President Obama has not quite surrendered to their bombast, but last year he reportedly sent a secret delegation to Pyongyang to open some sort of discussions. What they want is more “negotiations” to craft another agreement that would give them food and fuel oil and which they would violate after receiving their bounty. In all probability, it’s only because of the press of events in North Korea that their timing was so bad. If they’d managed to wait out the long-scheduled war games and kept their mouths shut another month, the “state of war” announcement might have evoked another secret delegation bearing gifts rather than the flight of two B-2s to drop dummy bombs on a South Korean target range.

The Norks know their nuclear and missile arsenals aren’t ready to fight in the big leagues. Their embarrassment comes from weakness and creates fear. They have to realize now that their blackmail has failed.

The big conclusion we should draw is that there is more instability in Kim Jong-un’s regime than there has been since his grandfather took power. Some of the rhetoric is aimed at his political enemies, intended to moot their influence. And there are three possible results we should prepare for.

First, and most likely, is that there will be some turnover among the North Korean generals who actually hold power. In this case, “turnover” will mean some generals will be shot and others promoted. If this happens, and Kim’s power is institutionalized, there will be no immediate crisis, just the Norks’ continued march toward full nuclear power status.

Second, North Korea could do what it’s done so many times in the past. It could, and likely will, exchange artillery fire with the South. It could, as it did in 2010, attack and sink a South Korean naval vessel. This sort of flare-up will be deadly for those involved, but no others. It’s like a minor earthquake that relieves tectonic pressures and possibly prevents a bigger one.

The third possibility is the least likely. Because North Korea — unlike Iran — is capable of being deterred, it would be only a last resort for the Norks to invade the South or attack American bases. They lack the ability to reach U.S. targets but may be able to reach bases in South Korea or Japan. If any concerted attack were made, and any damage more than trivial — i.e., if any U.S. lives are lost — we would have to respond strongly and with enormous force. Whether Obama would or not is another matter. The fact that American B-2s can reach Korean targets with ease — as could pretty much everything else that has “USAF” or “US Navy” painted on the wings — is not a fact lost on the North Koreans.

North Korea, in all probability, won’t attack any Americans or do more than a token strike against the South. Like Iran, they have every reason to use the bounty of time Obama has granted to continue their march to nuclear power status. Blackmail failed, but it bought a lot of time.