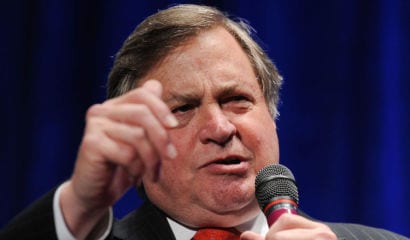 If you want to get a good example of the schizophrenia that plagues the Republican Party on big government, look no further than Clinton crew refugee Dick Morris.

“Republicans need to focus their fire on spending, spending and spending,” Morris advised in a recent column. “Obama is vulnerable and exposed and can be taken down over this issue.”

Morris opined, “Ever since President Obama succeeded in raising taxes, he has been left naked and unprotected on his opposition to spending cuts.”

In case anyone might miss the point, Morris titled this piece “Beat Obama on Spending.”

So far, so good. Except that Morris would go on to advise Republicans to keep their grubby hands off Medicare.

“But by avoiding Medicare and Social Security and focusing the debate on Medicaid and government spending,” Morris concludes, “the Republicans call Obama’s bluff and leave his plans for big government for all to see.”

“Why lose 10 years of elections to mess with those programs,” Morris asked at CPAC this year. “So what if we don’t get to zero?”

Perhaps it’s asking a bit much for the man who predicted the 2012 Mitt Romney landslide to peruse the actuarial tables for Medicare and Social Security.

Like the woman identified with the Tea Party who told the New York Times, “I guess I want smaller government and my Social Security,” the temptation is to talk about big government in theory while avoiding the “third rail of American politics” in practice.

But you can’t fight big government without reforming entitlements. And while Medicaid is an important component of the problem, it is just one part.

According to the Congressional Budget Office, Social Security spending is expected to soar 67 percent over the next decade. Spending on health care programs, including not just Medicaid but also Medicare and Obamacare, will balloon by 94 percent.

Exempting Social Security and Medicare from any cuts means ignoring the largest two mandatory spending programs that will comprise 62 percent of the federal budget by 2023.

“Avoiding Medicare and Social Security” while “focusing the debate on government spending” is mathematically impossible.

Even beyond the issues of big government and deficit spending, reforms to these cash-strapped entitlement programs for the middle class are unavoidable. We are nearing the point where it will be difficult to pay for the promises that have been made.

The window for reforming Medicare and Social Security without affecting the retirees who already depend on them is closing. That will necessitate cuts that are more politically damaging than gradual reforms.

If Medicare’s payments to doctors need to be cut to Medicaid levels to remain sustainable, Medicare’s quality will also begin to resemble Medicaid’s. Because so many doctors refuse to take Medicaid patients, by some measures the program’s beneficiaries fare worse than the uninsured.

Morris no doubt remembers the way his old boss Bill Clinton engaged in demagoguery against his new allies in the GOP on Social Security and Medicare. But Democrats had much less luck making an issue of Republican attempts to reform welfare.

It is always easier to target programs that benefit people who don’t work than it is to talk about earned entitlements for the middle class. But it took conservatives decades to make the case for reforming welfare before it was politically advantageous for Republicans, and Medicaid is no slam dunk even today (see the number of GOP governors signing off on Obamacare’s Medicaid expansion).

And unlike AFDC as we knew it, the entitlements status quo will inevitably result in higher middle-class taxes. In fact, as the House-passed budget reveals, the party is already struggling to keep middle-class taxes low in the current fiscal climate.

If Republicans can’t pass pro-growth tax cuts without also protecting average tax rates for the middle class, the party will have nothing to say to the American electorate in future campaigns.

House Budget Committee Chairman Paul Ryan has to some extent exemplified GOP double-mindedness on big government as well, voting for huge bailouts and Bush-era overspending at the same time he was drawing up roadmaps to a more fiscally responsible future.

But Ryan’s budgets are honest enough to state that keeping Americans paying a tax burden roughly consistent with what they’ve shouldered since World War II without going broke will require addressing the programs that drive the long-term debt.

Anybody who advises the Republican Party to return to its previous stance of selective anti-statism and cafeteria constitutionalism has been left naked and unprotected on his opposition to spending cuts.

(Mr. Antle’s new book, Devouring Freedom: Can Big Government Ever Be Stopped?, has just been published.)