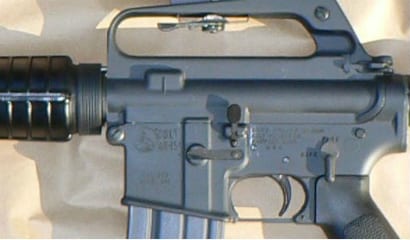 A key narrative in the push to ban assault weapons is that they are exceptionally powerful, firing rounds with a special capacity to pierce body armor and pulverize human bodies. The AR-15 infamously used in the Sandy Hook massacre fires the same 5.56x45mm NATO ammunition as its cousin the M16. The “NATO” designation seems to validate Senator Dianne Feinstein (D-CA) and company’s fear that these are military weapons which do not belong in the hands of civilians. The language of the Second Amendment and historical context in which it was conceived fundamentally undermine this logic:

A well regulated militia being necessary to the security of a free state, the right of the people to keep and bear arms shall not be infringed.

The Bill of Rights was adopted as a precaution against tyrannical government, with the Second Amendment democratizing military force. The Framers believed that citizens should have access to the military hardware they themselves would use to defend the homeland against tyranny, foreign or domestic, as members of militias. Whether this standard applies to artillery (reasonable persons may differ), it surely includes firearms. If anything, an originalist interpretation of the Constitution privileges the right to keep and bear arms suitable for militia service.

Progressives counter that the homeland has long been protected by a standing army. In their view, the right to keep and bear arms was confirmed strictly in the interest of military preparedness. No less than the Father of the Constitution expressly warned against a standing army. James Madison spent many months before the Constitutional Convention studying the history of governments. As he said to that body:

A standing military force, with an overgrown Executive will not long be safe companions to liberty. The means of defence against foreign danger have been always the instruments of tyranny at home. Among the Romans it was a standing maxim to excite a war, whenever a revolt was apprehended. Throughout all Europe, the armies kept up under the pretext of defending, have enslaved the people.

Given Madison’s stance, a more powerful central government with a standing army intensifies the Lockean argument for a right to keep and bear arms. This is not the appropriate setting for a philosophical discussion about America’s national defense. But our nation’s intellectual godfather predicted the pattern of its military evolution. Although this prediction came in the form of a warning, Madison initially opposed the Bill of Rights, partially because he believed that the liberties it professed were self-evident. This illustrates the fundamental nature and expansive scope of the constitutional right to keep and bear arms.

The gun controllers’ standard response to constitutional originalists is Supreme Court Justice Antonin Scalia’s statement in his District of Columbia v. Heller majority opinion: “We think that limitation is fairly supported by the historical tradition of prohibiting the carrying of ‘dangerous and unusual weapons.’” Are assault rifles particularly “dangerous and unusual?” Examining the archetypical AR-15 can provide insight.

Is it unusual? The AR-15 is a semi-automatic version of the M16 rifle, a sound but conventional design firing 5.56x45mm NATO ammunition. It features lightweight, modular construction, allowing it to accept myriad accessories and even be converted to fire other rounds, like low-recoil .22 caliber. Many “assault weapon” features enhance user friendliness and safety, including adjustable stocks that allow for secure fit, and barrel shrouds that prevent user contact with hot surfaces. There are concrete reasons behind references to the AR-15 as an ideal self-defense tool, notably for women. Many if not most of the arguments against assault weapons are arguments against sound ergonomics. Rifle shootings, particularly mass shootings, are extremely uncommon. The primary effect of an assault weapons ban would be on peaceful, law-abiding citizens.

Is the AR-15 dangerous? Being a gun, the obvious answer is yes. But is it dangerous to an unusual degree? Are Senators Feinstein and Richard Blumenthal (D-CT) correct to worry that its ammunition poses a special risk to law enforcement officials and innocent civilians?

Military history offers clarity. For roughly a century, the standard-issue infantry weapon of the United States was a rifle firing a full-powered cartridge. The term “battle rifle” refers to a full-sized rifle designated for infantry use. A full-powered cartridge is distinguished by its size, typically 0.30” or larger, and commensurate stopping power. The final American battle rifle, the M14, fires 7.62x51mm NATO ammunition. As an illustration of its power, the M14 is the basis of modern American sniper rifles, which use extra precise “match grade” versions of the same cartridge.

In 1961 the United States went in a new direction with the M16 assault rifle, which fully replaced the M14 battle rifle by 1970, and remains in standard issue. Its 5.56x45mm NATO ammunition’s smaller size and reduced recoil allowed for rapid fire and facilitated light, compact packaging. This made the M16 much more usable than the M14 under most circumstances. In general, assault rifles are distinguished by being smaller and lighter than full-sized rifles.

The 5.56 is a classic example of an intermediate cartridge. It certainly packs more power than a standard pistol shot, but is a clear step down from the 7.62 of the M14. A simple visual comparison illustrates the difference. The longstanding criticism of the 5.56 in military applications is that it lacks stopping power. Some experts fundamentally question whether it should be replaced. Although the round yaws dramatically in human tissue and fragments with sufficient impact velocity, it simply lacks the force to bring down human targets the way a full-powered cartridge can. Compared to the damage of an M14, the wounds inflicted by an M16, and by extension an AR-15, are likely to be messier, but less likely to be fatal. This may explain reports that the Sandy Hook victims’ wounds were visually striking.

Far from being the perfect killing machine, the AR-15 has strengths and weaknesses, like any other tool. The 5.56x45mm NATO round sounds scary to the uninitiated, but it too has strengths and weaknesses, notably a lack of stopping power. In the right hands, the AR-15 can be lethal, but that says more about the handling of firearms than the firearm itself. As I noted at the beginning of the current gun control debate, the facility of the user is decisive. Handling a gun is not particularly intuitive. Guns are loud, disorienting, and as unforgiving to their users as anyone else. Singling out the AR-15 or 5.56 round and saying that assault weapons belong only on the battlefield is not wrong so much as meaninglessly simplistic.

UPDATE: In light of feedback in the comments section of this article and elsewhere, I have cobbled together a follow-up piece, viewable on the Spectacle Blog. Thanks to my readers for their informative, constructive responses!