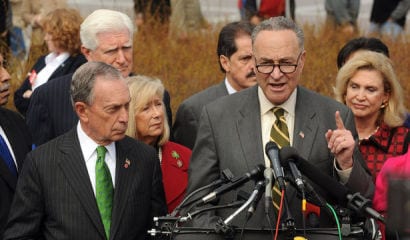 For months now the Washington Post and its polling partner, ABC News, have been doing their utmost to support the Obama administration’s campaign against the Second Amendment. The “gun show loophole” has been a recurring theme in this campaign, with the Post recently reporting that “nine in 10 Americans support requiring background checks on people buying firearms at gun shows.”

With this barrage continuing, we should all be clear about what’s in play here. First of all, there is no “gun show loophole.” Sales at gun shows by dealers already require background checks. As anyone who’s actually been to a gun show knows, background checks are the norm. Moreover, as a private seller, today one is not allowed to conduct a background check on a prospective purchaser. Only licensed dealers are allowed to do that.

Enter Senator Chuck Schumer, who has introduced S. 374, quaintly titled the Fix Gun Checks Act of 2013. Believe it or not, I have yet to see in the national press, or hear on national broadcast news, a single straightforward description of exactly what this bill would do, and to whom.

Because S.374 is not as long as the so-called Affordable Care Act, we need not pass this bill to find out what’s in it. I have read the bill. I know what’s in it. As a result, I now understand why the President’s supporters in the mainstream media have not rushed to describe just how drastically this legislation would infringe the rights of law-abiding gun owners, or how little it will do to make it more difficult for “dangerous people to own guns.”

The Schumer bill would regulate not just sales, but gun “transfers” of all sorts. It requires reporting gun ownership to licensed dealers in almost all circumstances involving any kind of “transfer,” including one in which a friend or relative is given temporary possession of a firearm on a hunt, at a shoot, or to examine for possible purchase. A simple, “Here, fire a few rounds, see what you think,” brings into play vast federal regulatory and prosecutorial machinery.

The bill’s purported “family” exemption provides almost no shelter. It applies only to “bona fide gifts,” not (gotcha!) to sales or temporary transfers. Even the narrow exemption for gifts does not benefit cousins, or uncles and nephews, or in-laws. Moreover, an exemption for “hunting or sporting” purposes defines the eligible premises, such as shooting ranges, so narrowly that many venues will not qualify.

If enacted, this bill’s impact on the ordinary activities of law-abiding citizens will be sweeping and unprecedented. By design the law will criminalize safe and responsible conduct that has been legal throughout the history of our republic.

Considering some specifics illustrates my point. Accordingly, I invite readers to think about whether, and how, they believe the federal government should regulate the following:

1. Uncle George owns a farm, where he has taught his nephew Abraham shooting skills and gun safety over a number of years. On Abraham’s 18th birthday, Uncle George gives Abraham a 20-gauge shotgun once owned by Abraham’s grandfather.

2. Abraham lends the shotgun to his long time hunting buddy and best friend, who uses it on a hunting trip and returns it to Abraham ten days later.

3. Uncle George and his friends have an informal hunting club, which leases “hunting rights” from a rural landowner. The “club” holds shooting competitions on an open field on the landowner’s property. At one of these “shoots,” George allows another “club” member to use a pistol George inherited from his father.

4. George’s friend asks about purchasing the pistol. He visits George’s farm to discuss a possible purchase and examine the pistol carefully. George and his friend walk to a hillside well away from George’s house, where the friend shoots the pistol at targets on a dirt embankment.

5. George agrees to sell the pistol to his friend. Before doing so he calls a licensed gun dealer he knows, asking the dealer to run a background check on the prospective purchaser, just in case. The dealer agrees, and tells George by telephone that the purchaser checks out. After hearing this, George sells his friend the pistol.

6. George takes his family on a month-long vacation to Europe. Concerned about a break-in during his absence, he leaves his firearms and other valuables with a trusted neighbor for safekeeping while he is away.

7. Nephew Abraham’s apartment is burglarized. Thieves steal his prized 20-gauge shotgun. The day after the burglary he calls the local police. They come to his apartment, interview him, and tell him they’ll make some inquiries and get back in touch. Abraham takes no further action, waiting to hear back from the police.

Under the Schumer bill, George or Abraham, or both, can be prosecuted for federal felonies in each and every one of the situations described above. As a bonus, the licensed dealer who ran the background check can also be charged for failure to examine the firearm sold and include data on it in federally required records.

Any chance implementing regulations will temper the bill’s potential for raising the cost and burden of responsible gun ownership? Not likely with Attorney General Eric Holder responsible for issuing the regulations. If you’re a Mexican drug cartel, he’s already supplied you with assault weapons you’ve used to kill thousands of your countrymen and more than a few Americans as well. But if you’re a hunter in Arkansas, or a suburb dweller in Detroit who wants a weapon for home defense, my guess is Mr. Holder is not going to be much help.

All guns to be sold privately — or even loaned temporarily during target practice or on a hunting trip — must first be taken to an approved federal agent for inspection and registration. There will be inconvenience, forms to complete, and delays and invasions of privacy of unpredictable magnitude. The bill expressly empowers Mr. Holder to determine how high a fee federal agents can charge for every backyard loan or sale to a cousin. Experience teaches that over time the fees will escalate along with the expense and complexity of the entire process.

Under Mr. Schumer’s bill, the burden of exercising one’s Second Amendment rights will grow steadily. The bill will impose onerous burdens on law-abiding individuals. It will make it far more difficult and expensive than ever before for people to acquire, own, and use firearms — in safe, ordinary, and currently lawful ways. Inevitably, it will lead to the creation of a faceless bureaucracy that will impose costly and intrusive controls on activities that law-abiding citizens have engaged in for a couple of centuries now without federal “assistance.”

The Schumer bill is yet another federal scheme that will transfer power and wealth from the people to our (by the way, well-armed) ruling elites here in The Nation’s Only Boom Town. And, as intended, it will result in the incremental erosion and infringement of Second Amendment rights.

We read these days that purchases of firearms and ammunition by private individuals are at an all time high. It is no wonder. Perhaps the phenomenon is what Henry Wadsworth Longfellow would call “a cry of defiance, and not of fear.”