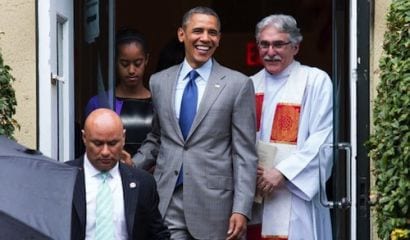 Last Easter Sunday President Obama and his family attended St. John’s Episcopal Church across Lafayette Square as he has in the past, and as have many presidents dating back to James Monroe. The clergy there across 200 years have usually been careful not to get political, welcoming across partisan divides, and making the historic sanctuary, designed by U.S. Capitol architect Benjamin Latrobe, the “church of the presidents.”

But that nonpartisan moniker may have just changed, the lead clergy there having earned headlines for an Easter sermon that essentially derided religious conservatives as racists, chauvinists and bigots.

“The captains of the religious right are always calling us back, back, back, for blacks to be back in the back of the bus, for women to be back in the kitchen, for gays to be in the closet and for immigrants to be on their side of the border,” sermonized the Rev. Luis Leon, who’s been at the church since 1995. He previously had been relatively noncontroversial. He prayed at President George W. Bush’s second inaugural and also Obama’s, having replaced the Atlanta evangelical pastor whom the Obama White House deemed unacceptable after an old sermon against homosexuality was reported. Leon supports same sex marriage, which is unexceptional for an Episcopal clergy.

Stepping forward to perform public relations for Rev. Leon against “mischaracterization” of his sermon has been a parishioner described as a “Republican activist” who worked for the Labor Department under the last Bush Administration. “It was certainly not what he meant,” this widely quoted church attender insisted against all the “conservative hate,” claiming Leon was not “race baiting” or “pandering” to Obama, just warning against misplaced nostalgia. “But that didn’t stop people from jumping to ridiculous conclusions and vilifying him, our church, and Episcopalians in general,” he wrote in a blog. “His sermon was a message of hope, not hate, that he was delivering to our congregation.”

Yet audio confirms that Leon didn’t just jibe religious conservatives for romanticizing the past. Rather “the captains of the religious right are always calling us back, back, back, for blacks to be back in the back of the bus, for women to be back in the kitchen, for gays to be in the closet and for immigrants to be on their side of the border.” The implication is pretty direct, and Leon has declined opportunities so far to restate.

This church and state separationist declared that “clergy are perfectly free to address public issues in their sermons if they choose to do so” as long as they avoid electoral intervention. Religious conservatives shouldn’t “carp when a sermon about public issues doesn’t break their way.” And he surmised: “Off in the distance, I hear the howls of the hypocrites….”

Often the Religious Left projects onto conservative religionists an overriding lust for politicized religion, hence the charge of hypocrisy over Leon. But this allegation typically conflates any engagement with politics with subverting worship. Traditionalists who believe in proclaiming the message of eternal redemption are less prone to political sermons than liberal Social Gospel advocates who equate God’s Kingdom with government-instituted social justice.

The Religious Right has primarily relied on political action groups funded by direct mail like the Moral Majority and Christian Coalition. Contrastingly, the Religious Left has mainly relied on actual church denominations and their ecumenical groupings, like the now nearly comatose National Council of Churches.

It’s hard to picture a prominent conservative preacher scoring political points in an Easter sermon, which is supposed to focus on Christ’s resurrection, especially with the President attending. And if in such a situation a conservative clergy committed the equivalent of Leon’s feat, perhaps by calling the Religious Left communist, with a Republican president looking on, there would be demands for apologies, and for the President to disavow that church.

This Sunday, Rev. Leon should disavow his Easter allegation that religious conservatives are racists. Or he should instead name the “captains of the Religious Right” who want to go “back, back, back, for blacks to be back in the back of the bus…” Otherwise, the “church of the presidents” should at least under its current clergy be deemed inappropriate as a place of worship for any president.