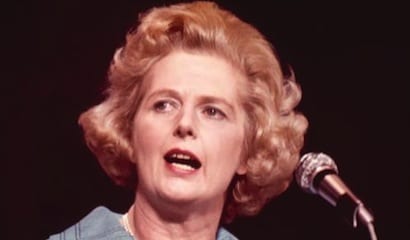 Where there was error, she brought truth. The error that was socialism had dominated British politics for almost half a century. Politicians of all three main parties had come to believe that a high-tax society with public control of the means of production (“the commanding heights of the economy,” as Lenin himself put it) was the way forward for Britain. The result was a country where bureaucracy and trade unions ruled while enterprise and innovation stagnated.

It took weeks to get a new telephone. Getting a new heating system involved a visit to the local Gas Board “showroom,” with its pitiful selection of products. Britain’s once proud automobile industry had become a national joke, with workers striking for huge pay raises on a regular basis. The coal miners’ union had brought down one Conservative government and threatened to do so again. Just before her election, the “Winter of Discontent” strikes had led to weeks of garbage collecting in major cities and the dead lying unburied.

Mrs. Thatcher recognized the great error of socialism. As she put it, the trouble with socialism is that you eventually run out of other people’s money. She proposed a twofold solution. First, stop spending other people’s money. Second, give them the opportunity to earn it. In short, she sought to reintroduce liberal capitalism to the country that had once been at its vanguard — from the repeal of the Corn Laws to the Industrial Revolution.

To achieve the first objective, she slowly but surely privatized nationalized industries (though, unfortunately, not the BBC), took on the trade unions and won, and reduced the size of the civil service. She achieved the second objective by lifting onerous regulations on Britain’s financial sector — one of her first acts was to lift capital controls — and implementing sound monetary policy. And she did all this in defiance of the received economic wisdom of the time.

At the polls, she defeated the error of socialism three times in a row (four if you include her Tory successor John Major’s 1992 victory). The result was vindication of the best kind, as the Labour Party, under Tony Blair, rejected a return to nationalization and instead recognized the truth that people did best under capitalism.

Where there was doubt, she brought faith. Margaret Thatcher reintroduced what she termed conviction politics to Britain. The era of socialist dominance had been made possible by “consensus” politics, where all the elites agreed on the way forward, often appealing to pragmatism in the process. Mrs. Thatcher rejected all of that. In 1975, she visited the Conservative Research Department, where one of the researchers argued in favor of “the middle way.” In response, retells John Ranelagh in Thatcher’s People: An Insider’s Account of the Politics, the Power, and the Personalities, she reached “into her briefcase and took out a book. It was Hayek’s The Constitution of Liberty. Interrupting our pragmatist, she held the book up for all of us to see. ‘This,’ she said sternly, ‘is what we believe,’ and banged Hayek down on the table.”

It was that kind of conviction that led to her refusal to change course when sagging opinion polls drove her wavering colleagues to want to return to pragmatic (read: socialist) economic policies — summarized in her famous, “The lady’s not for turning” speech in 1980. It led her to back President Reagan’s efforts to bring down the Soviet Union. It led to her confounding the doubters and Argentina’s military junta when she mobilized the Royal Navy to take back the Falkland Islands in 1982. And it led to perhaps her most famous nickname — the Iron Lady.

Where there was despair, she brought hope. Britain was the “sick man of Europe” when she formed her first government. Yet by the time she left office, she had presided over a resurgence in Britain’s economy and national pride. Her reforms laid the groundwork for the economic successes of both the Major and Blair governments (until Gordon Brown’s reckless spending and bubble-inflating policies threw sand in the gears). British companies could once again become world leaders. The foundations for the Blair era of “Cool Britannia” were laid during her governments.

Just as importantly, she had a cultural impact on Britain that helped make the country a more open and equitable place. In 1978, everything seemed hopeless. Then came Thatcher. In a country where the class structure seemed ossified, the example of a grocer’s daughter brushing aside the glass ceiling as if it didn’t exist and defeating the entrenched interests of leftist class warriors and aristocratic privilege alike inspired countless individuals — this writer among them. By 1990, Britain was full of hope.

But alas, not everyone. Where there was discord, she failed to bring harmony. Her defeated opponents were resentful, and there was regrettably a great deal of collateral damage. In the north of England and Scotland especially, the constituencies best served by the old regime, there remained high unemployment and low investment. These areas were lost forever to the Conservative Party. “Tory” became an insult. The BBC, the last great unreformed public corporation, served up a diet of anger at the perceived lack of compassion in the Thatcher years, while remaining largely silent about the misery that preceded her. Unsurprisingly, the news of her passing brought out all these resentments, with twitter hashtags like #dingdongthewitchisdead and references to “tramping down the dirt” on her grave abounding.

There is even some disquiet on the right about her time in office. Her greatest mistake was to promote the passage of the Single European Act in 1985, which led to so much of Britain’s government becoming subordinate to the European Union. She also introduced the National Curriculum, which led to a dumbing down of British education, and regrettably strengthened police powers to the detriment of Britain’s civil libertarian tradition — which set the precedent for the Blair government to turn Britain into something approaching a constant surveillance state. Yet most Conservatives recognize her achievements far outweighed these mistakes.

Looking back, perhaps it was inevitable that she would fail at bringing harmony. Those who refused to see the errors of their beliefs, who did not share her faith, and who could not resist every opportunity to exploit despair, would never allow that to happen. It is to her credit that she did not allow this to turn her from her course. It took some courage to quote Saint Francis in 1979, and in the end it is her courage that is her legacy.