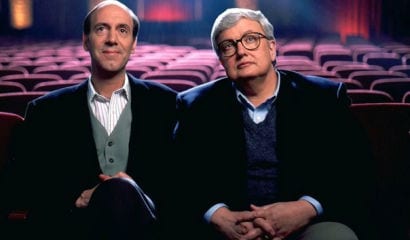 If it’s not nice to speak ill of the dead, it’s probably doubly insensitive to speak ill of a man whose last years were spent miserably but courageously behind a mask, which may account for the over-praise lavished upon Roger Ebert after his death last week at 70.

Even so, Ebert’s long reign as “the people’s critic” — whoever started that one? — was due to two things: long exposure on TV discussing the common man’s favorite art form and no small knack for self-promotion and posing as an ambassador of cinema. Ebert knew films and worked diligently writing about them, but he often sounded as if he had invented movies.

Ebert was a decent enough critic and a perceptive writer on occasion who could write some scathing put-downs. He was at his best focusing attention on overlooked films. I’m even a fan of one of his smaller books, a sharp, funny collection of movie clichés.

But for me Ebert was too much the professional movie fan, often gushing over films on the syndicated show, “At the Movies,” he co-hosted for 22 years, mainly with Gene Siskel, whose measured style I much preferred. They were a good TV team. Siskel was the anti-Ebert, who praised a lot of junk that Siskel eagerly took him to task over, rolling his eyes at his partner’s love of gratuitous gore and goofball comedies.

Siskel, who himself died unfairly young of a brain tumor at 53, was much harder to please and he was just the guy to mock Ebert’s gushy excesses. I can hear him even now groaning, “Oh, Roger — how can you say that?!” Ebert, of course, would readily ridicule Siskel’s raves, which were far less schoolgirlish than Ebert’s swooning valentines to mediocrity — inane two-bit comedies, pulpy crime films. Maybe that’s why he was labeled, in death, “the critic for the common man” (cue Aaron Copeland fanfare).

He loved mixing with movie stars, which led to his worst excess: working the red carpet at Academy Awards ceremonies, fawning over actors he was passing judgment on professionally. Nobody ever called him on it — and it wasn’t mentioned in any of the obituaries I read. I guess by that point Ebert was too big a star himself for an editor to grab the mike out of his hand and tell him to stop shilling for the film industry so publicly and shamelessly. In Ben Bradlee’s memorable phrase (when told one of his reporters was dating a government source), “If you cover the circus you can’t f*** the elephants.”

A writer friend of mine writes, “If he hadn’t landed on TV, and contracted a hideous illness, Ebert would be a run-of-the-mill Chicago voice who left us no quotable paragraph on movies” — a harsh assessment but perhaps true. “Ebert was a decent guy with all-American taste buds, but that’s about it. I still resent that he was the first movie critic to get a star on the Hollywood Walk of Fame. His star should read ‘Movie Maven.’”

Even the usually astute and skeptical New York Times media critic David Carr wrote a paean to Ebert this week, mainly for the entrepreneurial skills that turned Roger Ebert into a brand name. “Roger Ebert As a Builder of an Empire” the headline read. Ebert even patented the “thumbs up” tagline and logo, as if he had coined the mundane phrase. Not even Carr mentioned Ebert’s red carpet cooing at George Clooney and Julia Roberts.

I met Ebert on a 1968 Warner Bros. junket when newspapers still allowed them, and he was fairly full of himself in his mid-20s. He was the chubby boy wonder of the Chicago Sun-Times who later became America’s favorite movie critic when he and Siskel devised their 1975 show for PBS, which ran 22 years and cemented Ebert’s footprints in Hollywood. He and Siskel even became regulars on Carson and Letterman’s late-night shows and he ran something called “Eberfest,” a film festival outside Chicago.

It was fun to watch two bright newspaper guys on rival newspapers squabbling over movies, but after Siskel’s death much of the heat and bite went out of the show. None of the wanna-be Siskels effectively took on Ebert, by then a roly-poly motion picture pasha who even looked the part of Hollywood king maker — the Louis B. Mayer of movie criticism.