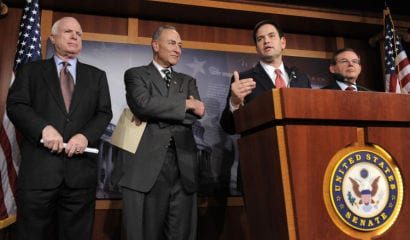 The Gang of Eight — four Democratic and four Republican U.S. senators — have been meeting behind closed doors since January to produce “comprehensive immigration reform.” That will mean a multi-thousand-page bill that no one reads.

You know the saying “fool me twice.” Americans got bamboozled in 2010, when the 2,572 page Obama health law was rushed through Congress unread. The surprises buried in that law are causing havoc. Let’s not repeat the mistake of “comprehensive” reform. Congress needs to fix immigration one step at a time, passing individual bills in plain English on border security, hiring, access to benefits such as Obamacare, and pathways to citizenship.

Short, readable bills will prevent shockers like the immigration provisions hidden in the Obama health law. Here are three examples — red flags for what’s ahead.

Americans are generous and welcoming, as we should be. But in tough times, it’s fair to look after our own first. The Obama health law does the opposite, giving a better deal to noncitizens than to citizens.

If you’re a citizen working for minimum wage and you are uninsured, the Obama health law will dump you onto Medicaid as of January 1, 2014. “Dump” is the right word. Medicaid is generally inferior coverage, largely because it pays doctors and hospitals so little. Surgery patients on Medicaid are 50% more likely to die in the hospital than surgery patients with private coverage, according to the Annals of Internal Medicine. (2010)

The better alternative — private coverage — is what low-income legal immigrants will get as of January 1, 2014. Obamacare’s authors wanted to sidestep the longstanding federal requirement that newcomers wait five years to be eligible for Medicaid. So they pulled a fast one, making legal immigrants immediately eligible for subsidized private plans on the insurance exchanges, with no waiting period and no income requirements. That coverage is valued at about $3,000 more than Medicaid coverage, according to the Congressional Budget Office. Newcomers will have better access to doctors and better medical outcomes than low-income citizens stuck in Medicaid.

To prevent more unfairness, Sen. Jeff Sessions (R. Ala.) offered an amendment on the floor of the U.S. Senate on March 23 anticipating the Gang of Eight’s proposal. The amendment said illegals upgraded to legal status would not immediately qualify for Obamacare. Amazingly, the amendment was defeated, with all Democrats and two Republicans voting against it. Yet without a provision like that, at least 11 million illegal immigrants could become eligible for Obamacare when their legal status changes, costing an estimated $50 billion to $66 billion a year.

That’s unaffordable, when the nation is making elderly Americans settle for less care. Cuts in Medicare pay for half of the Obama health law.

On April 3, the Obama administration released its proposed rules for “navigators” and “assistors” — hundreds of thousands of plum jobs (paying $22 to $48 dollars an hour) to enroll people in the new insurance exchanges. The administration doesn’t require math skills or knowledge of insurance. The priority is race and ethnicity. The hires have to be “representative of the demographic characteristics” of the communities served. The outrageous presumption is that only blacks can help blacks, only Mexicans can help Mexicans.

At a time when half of recent college graduates are unemployed or under-employed, the Obama administration is using ethnicity to steer lucrative jobs to community groups instead of opening them to everyone.

The rules also say consumers must be assisted in the language they prefer. Thousands of translators will be hired. America is a land of immigrants, and better for it. But assimilation made it a success, not multiculturalism. Pew Foundation research shows that two-thirds of Mexicans legally in the U.S. do not take steps to become citizens. Other immigrants, especially from Asia, work hard to assimilate and become citizens, according to a Manhattan Institute report. Whatever legislation is proposed, including health benefits to newcomers, should reward those newcomers who want to become Americans. The goal should be a melting pot, not a mosaic.