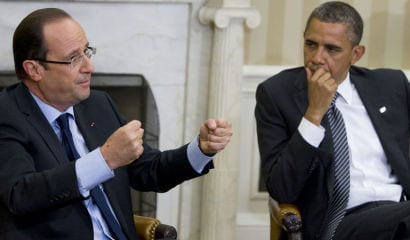 April in Paris is supposed to be about chestnuts in blossom, holiday tables under the trees, warm embraces. Sometimes it actually is, but this year is definitely different. Parisians are shivering and even more morose than ever as a month-long cold wave continues to produce a frigid north wind, record temperatures in the 30s, even the odd snow flurry. Occasionally you see bundled-up American tourists determinedly sipping an espresso at a sidewalk café. The French themselves are mostly inside, warming their hands over the fiery, seemingly endless scandal scorching the socialist administration of President François Hollande. For him, April is the cruelest month, with France fast becoming a political wasteland.

Hollande’s stormy spring began prematurely last December with a cloud no bigger than a man’s hand. A Paris investigative website called Mediapart claimed it had an audio recording in which a member of Hollande’s cabinet referred to an illegal Swiss bank account. But with French unemployment climbing by the month, a budget deficit nearing a disastrous 5 percent of GDP, growing public anger over his proposed same-sex marriage law, and his popularity plummeting into the 20s, Hollande had bigger things on his mind. One of them was insuring that France had an “exemplary republic.”

After financial scandals tarred Nicolas Sarkozy’s term, Hollande had promised to run a squeaky-clean socialist government that would not tolerate money-fueled corruption. (“I hate the rich,” he said during his campaign.) One of his first moves was to make his cabinet ministers sign a charter of ethics promising to be good. He cut their salaries by 30 percent and ordered them to take the train where possible instead of flying. Ostentatiously setting the example, he continued to live in his modest Paris apartment rather than moving into the Elysée Palace, gilded official residence of French presidents. Private citizens, too, would have to toe the line: no more financial hanky-panky, no more shifting money abroad — a French version of the New Soviet Man, however unlikely that might seem in a Latin country where magouillage, dealing with a wink and a nudge, is traditional, not to say admired. To crack down on his recalcitrant compatriots, he needed a faithful socialist who would be tough on tax evasion. Jérôme Cahuzac was just the man.

Like many of Hollande’s cabinet appointments made on the basis of personal relations rather than proven competence, Cahuzac had few visible qualifications for the job of budget minister. (Hollande’s prime minister, Jean-Marc Ayrault, is a former school teacher with a degree in German, his economics minister, Pierre Moscovici, a party apparatchik with no private-sector experience who ran Hollande’s 2012 campaign, and so on.) Cahuzac studied medicine in the 1970s — a period he once described as “one long party” — became a cardiologist, then, seeing more money, a plastic surgeon.

He and his dermatologist wife, Patricia, opened a lucrative clinic off the Champs-Elysées where they did micro-hair transplants on rich and famous pates, including a good many politicians. “When it’s so smooth you can’t notice it, that means he did it,” one prominent socialist bragged. He also wangled a spot as a consultant to the Health Ministry, developing contacts with France’s powerful pharmaceutical industry that would later prove highly profitable when he switched sides and became a consultant to several big pharma firms — reportedly worth up to some $1.2 million to him during one four-year period. He drove a Porsche and lived in a spacious apartment on leafy Avenue de Breteuil, one of the most expensive residential streets in Paris. When that was burgled, the losses he claimed to his insurance company included eight luxury watches worth over $13,000 each. All in all, just your ordinary limousine liberal in good standing.

Cahuzac began his political career in the late 1990s, getting elected as a socialist member of parliament. Making his specialty public finances, he headed the National Assembly’s finance committee beginning in 2011, crusading against tax evasion and for higher taxes on the wealthy. After joining the cabinet last year, he was Hollande’s Robespierre, known as Monsieur Rigueur for his rigorous integrity when it came to cracking down on fiscal fraud.

Thus the stunned incredulity when Mediapart named the offshoring cabinet minister as none other than Jérôme Cahuzac. It said the conversation was accidentally recorded in 2000, when he forgot to cut off a phone call before making another one to his financial adviser. “What bothers me is having an account open over there,” he said. “It’s not as if UBS was an obscure little bank.” It must have bothered him for many years, until a woman entered the picture.

Patricia Cahuzac, mother of his three children and partner in their clinic, wanted her fair share of an acrimonious divorce settlement but was unsure how much that was. So she put a team of private detectives on the trail of her husband’s wealth. How exactly the recording was leaked to the investigative site is the subject of much fevered conjecture and rumor over Paris dinner tables. But, this being France, the consensus is cherchez la femme. Hell hath no fury, as we know, and a scorned woman is likely at the heart of l’affaire Cahuzac.

Faced with the embarrassment of having put a fraudulent fox to guard the fiscal henhouse, the Hollande administration dragged its feet. A month after the initial story, it finally asked Swiss authorities if Cahuzac had an account specifically at UBS. The negative answer was quickly leaked to the media, giving the impression the case was closed. (If the query had not been deliberately limited to one bank, the reply would have been different; he had already moved on to another Geneva institution.) Cahuzac repeatedly and vociferously denied the allegation, standing up and swearing before the National Assembly he had never concealed money abroad, “Not now, not ever.” He compared having a Swiss account to being a little bit pregnant. “It’s either there or it’s not,” he told a French paper in February. “Do you think I’d still be in office if there was the slightest chance I had one?”

In mid-March a forensic exam by police labs found the phone voice was his. Cahuzac altruistically quit the cabinet “for the good of the government” but continued to deny. Then last week he suddenly confessed to investigating magistrates that for 20 years he had stashed some $770,000 in Swiss accounts, before transferring it to Singapore. (Swiss media reported he tried to invest $15 million in Geneva, but the bank refused for fear of complications.) He had been caught up in “a spiral of lies,” he said. He faces a penalty of five years in jail and a $490,000 fine.

As French media howled over the most spectacular government scandal since De Gaulle founded the Fifth Republic in 1958 — this is France, where the taboo is money, not sex — Hollande went into his best rendition of Captain Louis Renault discovering gambling at Rick’s. He was shocked, shocked by his minister’s three months of lies. Cahuzac had looked him in the eye and sworn he didn’t have a foreign account! It was, he said in a hurried TV address, “an unforgivable moral fault…an outrage to the republic.” He took no responsibility for it: “It’s not the government that failed, but a single man.” There was no question of a cabinet reshuffle or dissolution of the National Assembly and new elections, as the conservative opposition demands.

Hollande has spent the past week bobbing and weaving to avoid the only important question right now: what did he and his administration know, and when did they know it? Persistent rumors fly that the DCRI, the domestic intelligence service that spies on French citizens, had sent a note to the Elysée about Cahuzac before Christmas. “The Paris rumor mill [about Cahuzac] had been going full bore for ages” before the scandal broke, said a former cabinet minister under Sarkozy.

It puts Hollande in a lose-lose situation: either he’s a naïve chump with poor judgment for appointing as tax czar a greedy plastic surgeon known as a wheeler-dealer, and standing by him for months. Or he’s not so dumb and is guilty of complicity in a cover-up. Either way, he is increasingly treated with contempt. The two main newsmagazines out today entitle their respective cover stories “Monsieur Weak,” and “Is he up to it?” I have covered French presidents from De Gaulle to Pompidou, Giscard d’Estaing to Mitterrand, Chirac to Sarkozy. Sometimes they were hated or feared. This is the first time I have seen one treated with open, outright contempt by public and press.

This will taint Hollande’s socialist government for the rest of his five-year term. Main political beneficiaries will be the right-wing National Front, whose Marine Le Pen has long hammered at institutionalized corruption and complicity in French politics, and the far-left Parti de Gauche of Jean-Luc Mélenchon, who thunders about the “intrinsic rottenness of the system.” He is already organizing a protest demonstration on May 5 — the first anniversary of Hollande’s victory — to demand the end of the Fifth Republic and a new constitution. The Communist Party and others will jump on that bandwagon. The merry month of May could be incendiary: fully 77 percent of the French now furiously believe all the country’s politicos are corrupt.

That can only be reinforced by the revelation last week that a close personal friend of Hollande’s who served as treasurer of his 2012 campaign invested in offshore businesses in the tax haven Cayman Islands. After the story broke, Jean-Jacques Augier responded that he did not have a personal bank account in the Caymans or — choosing his words carefully — any personal direct investment there. It’s all legal. Questioned about his friend at a press conference, Hollande said he knew nothing about it. Period.

Meanwhile, Jérôme Cahuzac is contemplating a return to his seat in the National Assembly, his right under French law as an ex-minister. There he will earn pocket change of $17,500 a month. “They say I can’t return because I lied to the National Assembly,” he reasons coolly. “I say if all those who lied to it had to leave, there wouldn’t be many left.” It’s legal, just as Hollande’s friend can use the Caymans as a conduit for investments. But like most French politics today, it smells to high heaven.