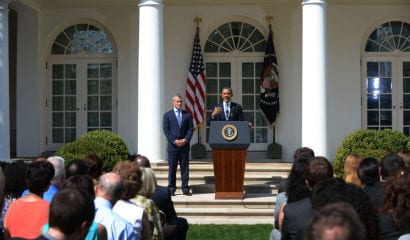 President Obama has released his new budget which, while offering a modest reform of Social Security, universally denounced by the Left, does nothing of consequence on Medicare or Medicaid. It is more of the same in the view of no less an authority than Paul Ryan (R-WI), chairman of the House Budget Committee.

“I’m disappointed by the President’s proposal because it merely ratifies the status quo. It doesn’t break new ground; it goes over old ground: It takes more from families to spend more in Washington,” says Ryan in a statement released by his office yesterday. “And the White House says they never balance the budget. Instead, it raises taxes by $1.1 trillion. It increases spending by $964 billion. And it adds $8.2 trillion to our debt.” This is on top of $1 trillion in new taxes from Obamacare and $600 billion from the recent budget hike to resolve the debt ceiling impasse.

Oh, yes, charitable giving also takes a hit. According to Forbes contributor Howard Husock, “The White House has effectively doubled down on a tax change it is pushing for four years that would limit the value of the charitable tax deduction.”

“In the budget released today, the President again proposes to cap the charitable deduction at 28 percent-despite the fact that the top rate on the highest earners has increased to 39.6 percent,” observes Husock. “Think of it this way: the White House proposal would raise the cost of giving to charity from 60 cents per dollar to 72 cents per dollar. That’s a 20 percent increase in what can be called the ‘charity tax.’” [Boldface in the original.] Take that, Sierra Club and Catholic Charities and Howard University and…

Husock cites the Chronicle of Philanthropy, which believes that giving may be reduced by as much as $9 billion a year.

As I have opined before, Obama does not quite have the same high regard for civil society, voluntary associations, and charity that the great 19th century French commentator Alexis de Tocqueville saw as the unique genius of Americans.

But back to Paul Ryan who excoriates the White House and congressional Democrats for “defending the status quo” and “letting critical programs like Medicare wither on their watch. They’re cementing record poverty and high unemployment into place.” [Boldface added.] While pledging to pursue common ground, at minimum, he believes that “we need to make down payment on our debt — now.”

“We can start with common-sense reforms to strengthen entitlements and revenue-neutral tax reform,” said Ryan. In sum, he views the President’s budget as a “missed opportunity.”

I would have one minor criticism of Chairman Ryan’s otherwise excellent statement of the case. The President’s budget is actually worse than the status quo, given its increase in spending and taxation. So maybe gridlock is not so bad after all.

Obviously, we are already in a political environment anticipating the midterm congressional elections in 2014. These election seasons start sooner every cycle. In fact, they never end. Obama is betting that holding tough will energize his base, and the Republicans are betting they can keep a majority in the House and get back on track to a majority in the Senate despite horrible back-to-back results in the last two election cycles.

The GOP congressional caucus is not very popular these days, but the public does not have a lot of confidence in the Democrats on economic and fiscal policy. From my perspective the Pachyderms really have no choice but to go on offense regarding its message of spending restraint, entitlement reform, and tax reform. Regarding this last leg of the policy stool, my sense would be to focus on corporate tax reform because it is clear we have the highest of any developed economy and even the President and many Senate Democrats have expressed some interest in the topic. It has a clear tie-in with jobs, which are in short supply.

One cannot predict with any certainty that the American public still cares very much about sane economic, fiscal, and tax policy. But these are the right messages for a country very much in need of economic rejuvenation. So the GOP should assume nothing, educate and maintain ceaseless communication with the electorate, going over, under, around, and through the mainstream media. Is there any other option?

It is time for modern-day Committees of Correspondence, digitalized, no doubt, but as energetic as those formed by the colonists on the eve of the American Revolution. Love it or hate it, the 2014 elections have started. The game is afoot.