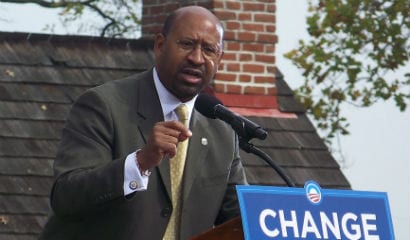 WHEN PHILADELPHIA MAGAZINE published an article Mayor Michael Nutter didn’t like, he tried to censor it. He wrote a letter to the Philadelphia Human Relations Commission asking it “to evaluate whether the ‘speech’ employed in this essay is not the reckless equivalent of ‘shouting “fire!” in a crowded theater.’”

The correct answer to Nutter’s query is “Nuts!” A magazine article obviously cannot be the “equivalent of ‘[falsely] shouting “fire!” in a crowded theater,’” which, by the way, is the laziest cliché in all of constitutional law. Nor did the essay in question run afoul of any of the First Amendment’s limited and narrow exceptions: libel, invasion of privacy, obscenity, fighting words, incitement of imminent lawlessness. Nor, even if it had, would an agency that, by its own description, “enforces the civil rights laws and deals with matters of intergroup conflict” have any expertise or authority to review the question.

In short, Nutter’s attempted assault on free expression was demagogic, impotent, ignorant, un-American, and buffoonish. But that doesn’t mean it wasn’t worthwhile. For Nutter, in sacrificing his own dignity, called attention to a superb and important piece of journalism.

The article, titled “Being White in Philly,” and featured on the magazine’s March cover, was an exploration of race—in what author Robert Huber describes as “a largely segregated city, with uneasy boundaries in culture and understanding”—from the standpoint of white people.

Huber argues persuasively that white voices are systematically excluded from the debate, in part because whites are inhibited from joining it:

What gets examined publicly about race is generally one-dimensional, looked at almost exclusively from the perspective of people of color. Of course, it is black people who have faced generations of discrimination and who deal with it still. But our public discourse ignores the fact that race—particularly in a place like Philadelphia—is also an issue for white people. Though white people never talk about it.

He offered this illuminating anecdote:

Take a young woman I’ll call Susan, whom I met recently. She lost her BlackBerry in a biology lab at Villanova and Facebooked all the class members she could find, “wondering if you happened to pick it up or know who did.” No one had it. There was one black student in the class, whom I’ll call Carol, who responded: “Why would I just happen to pick up a BlackBerry and if this is a personal message I’m offended!”

Susan assured her that she had Facebooked the whole class. Carol wrote: “Next time be careful what type of messages you send around and what you say in them.”

After that, when their paths crossed at school, Carol would avoid eye contact with Susan, wordless. What did I do? Susan wondered. The only explanation she could think of was Vanilla-nova—the old joke about the school’s distinct lack of color, its perceived lack of welcome to African-Americans. Susan started making an effort to say hello when she saw Carol, and eventually they acted as if nothing had happened. The BlackBerry incident—it probably goes without saying—was never discussed.

In this story (of which, to be sure, we have heard only one side), Carol’s defenses lead her to misjudge Susan’s intentions. That’s sometimes known as prejudice. Susan, puzzled and hurt, tries to imagine what is going through Carol’s mind and makes an effort to heal the breach. She succeeds, although without ever confronting what caused the hostility in the first place.

Who has more to lose from a misunderstanding like this? It seems obvious that Carol does. In a white-majority institution or society, difficulty getting along with white people is going to be more of a hindrance to social or economic success than difficulty getting along with black people. Racism (for blacks) and the accusation of racism (for whites) are not irrational things to fear. But it’s easier for whites to deal with the fear through a strategy of avoidance.

To her credit, Susan didn’t avoid Carol. But she did avoid the issue. First she said something that seemed racist, then she started acting nice, but she never dared confront the initial miscommunication. Would it not be useful for Carol to understand what happened from Susan’s point of view?

Huber’s article was a sensitive and thoughtful treatment of a difficult and important subject. The white Philadelphians he interviewed did not come across as “racist,” not even the 87-year-old guy who let slip the N-word. The concluding paragraphs sum up the theme:

The problems seem intractable. In so many quarters, simply discussing race is seen as racist. And so white people are stuck, dishonest by default.…We’re stuck in another way, too. Our troubled black communities create in us a tangle of feelings, including this one: a desire for things to be better. But for that sentiment to come true—for it to mean anything, even—I’ve come to believe that white people have to risk being much more open.…

We need to bridge the conversational divide so that there are no longer two private dialogues in Philadelphia—white people talking to other whites, and black people to blacks—but a city in which it is okay to speak openly about race. That feels like a lot to ask, a leap of faith for everyone. It also seems like the only place to go, the necessary next step.

Meanwhile, when I drive through North Philly to visit my son [at Temple University], I continue to feel both profoundly sad and a blind desire to escape.

Though I wonder: Am I allowed to say even that?

At the heart of the left-liberal ideology that dominates American debate about race is a glaring contradiction. In theory, white attitudes are all-important, in that any difficulties blacks experience are said to be the result of white racism. But the way Mayor Nutter reacted to the article shows that there is no interest in pondering actual white attitudes toward race, and every interest in suppressing—or stereotyping—them.

You can see why. Democratic politicians like Nutter, black and white, exploit blacks’ fears to win their votes. Whites deal with racial tension through various strategies of avoidance, from moving to the suburbs to loudly accusing other whites of racism. (These days “white guilt” is almost always directed outward.) It’s easier than getting involved in any sort of constructive way.

Amid all this, Robert Huber and Philadelphia magazine have shone a bright light of truth. Sometimes when free expression is under attack, one must defend it on principle, even while apologizing for the use to which, say, Hustler or the Westboro Baptist Church puts it. This is not such an occasion. Huber’s work is fully worthy of the high ideal of freedom of the press.