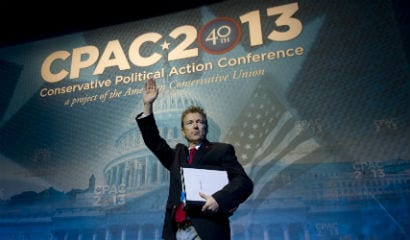 IN MOST YEARS, there is fairly little in common between the Conservative Political Action Conference and the annual confab held by the American Israel Public Affairs Committee.  CPAC hosts a kaleidoscope of factions openly contesting the meaning of conservatism; AIPAC’s only ideology is Zionism, and any disagreement over its meaning is muted. CPAC is all on the record; many of the breakout sessions at the AIPAC Policy Conference are off the record and closed to press. And while politicians who speak at CPAC are almost all Republicans (the odd capital-L Libertarian or unfrozen-caveman conservative Democrat aside), AIPAC is self-consciously bipartisan, as cartoon donkeys and elephants remind attendees as they file in to listen politely to Democrats and Republicans alike.

But this year, the two conferences had something in common: The consequences of Barack Obama’s re-election cast a pall over both.

The AIPAC Policy Conference, an enormous event that fills the Washington Convention Center, was held shortly after Chuck Hagel was confirmed as secretary of defense. When Hagel said, “The Jewish lobby intimidates a lot of people up here,” AIPAC was what he had in mind.

Ironically, AIPAC was AWOL from Hagel’s confirmation fight. “There is zero activity on the Hill from AIPAC,” a Senate aide told Washington Examiner columnist (and TAS alumnus) Philip Klein. Officially, AIPAC stayed on the sidelines because its aim is to influence policy, not personnel; unofficially, the group calculated that it would be better to avoid picking a fight that could alienate the Obama administration. Into the breach stepped groups like the Emergency Committee for Israel, which produces punchy and award-winning political ads, and Christians United for Israel, which can light up the phones on Capitol Hill. But neither has AIPAC’s phalanx of professional lobbyists or influence with Democrats.

Though there were many unshakably partisan Democrats in the Convention Center (Vice President Joe Biden was very well received), angst over Hagel boiled beneath the surface of the conference. Then–Israeli defense minister Ehud Barak caused a moment of palpable awkwardness when he said, “I wish Secretary Hagel all the best in his new role. As secretary of defense he will no doubt serve his country with the same pride and honor with which he served both on the battlefield and in Congress.” The crowd responded with scattered, muted applause. Oblique jabs at Hagel from Republican senators John Cornyn and John McCain were met with knowing approval; Democratic Senator Kirsten Gillibrand, who supported Hagel, had to sit on stage and endure the applause as McCain, during a panel discussion, called for “members of the national security team who are pro-Israel, not anti-Israel.”

Meanwhile, Ted Cruz earned “a full minute of applause” when a questioner praised his opposition to Hagel at an off-the-record breakout session, according to an attendee who ignored the ground rules and tweeted about it.

CPAC HAS SPENT THE LAST DECADE GROWING. It was held at the famous Omni Shoreham Hotel before moving across the street in 2010 to the larger Marriott, but the audience for the most popular speakers still couldn’t fit in the ballroom. This year, instead of being held steps from a Metro stop in the middle of Washington, CPAC was held for the first time in Maryland, at the huge Gaylord Hotel at National Harbor, an outcrop of newly developed storefronts (the soon-to-be-built casino is expected to bring in tourists, but as of now the area has an eerie emptiness to it). It was inconvenient for locals and left out-of-town visitors with no easy access to the city.

The crowding was alleviated, but the tremendous growth in the number of attendees from the mid-2000s didn’t continue apace, in part because this year there were no presidential campaigns busing in supporters to goose the turnout in the straw poll. Between the absence of overflowing throngs and the lingering sting of the election results, the whole affair seemed drained of energy.

The conservative movement’s factions also pushed back against the often puzzling decisions of the American Conservative Union board, which controls CPAC. The gay conservative group GOProud was excluded from the proceedings for the second year in a row; the Competitive Enterprise Institute, breaking from its normal focus on libertarian economics, used its privileges as a cosponsor to hold a panel featuring GOProud’s executive director and several conservative defenders of gay marriage. It attracted a standing-room-only audience.

New Jersey Governor Chris Christie was not invited to speak; ACU chairman Al Cardenas claimed that Christie had not been an “all-star” conservative this year but might qualify in other years, which was odd given the presence on the CPAC stage of the buffoonish Donald Trump—who is by no reasonable metric more conservative than GOProud.

All of this did make for a few good laugh lines. Guy Benson of Townhall, hosting part of the program from the ballroom main stage, mocked Trump’s conspiracy theories about President Obama’s birth certificate and joked that he “was shocked Chris Christie was excluded from CPAC this year. I had no idea he was gay.”

But the meat of CPAC isn’t the political panels or the breakout sessions; it’s the showcase of potential future GOP presidential candidates, which made back-to-back speeches by Marco Rubio and Rand Paul especially interesting. Rubio gave a stirring defense of American hegemony in a high-energy speech filled with applause lines. Rand Paul followed with a much lower-key and slightly wonky talk. But Paul’s audience started with a standing ovation, and much of the crowd, despite having many fewer lines to clap for, simply didn’t sit down. Many of them sported “Stand With Rand” paraphernalia, a reference to Paul’s 13-hour talking filibuster that ostensibly protested the (totally fantastical) notion of drone strikes on U.S. citizens on American soil, but gestured at a broader critique of the administration’s drone policy. Paul edged out Rubio in the presidential straw poll, 25 percent to 23 percent (no other candidate cracked double digits).

All this brings to mind yet another Washington gala of recent months: the International Students for Liberty Conference, a gathering of fresh-faced young activists who likely cast their first presidential ballots for Ron Paul. Among the most popular of that conference’s breakout sessions was an appearance by Rep. Justin Amash, the 32-year-old Republican from Michigan elected in 2010. Amash’s iconoclastic critiques of Republican leadership make libertarians swoon, but his description of coalition politics were much more telling: He mentioned social conservatives in a neutral tone, but then added contemptuously that the GOP also includes “neoconservatives, unfortunately.”

As more conservatives have reconciled to gay marriage, social issues have acted less and less as a wedge between libertarians and traditionalists. There was once also a hawkish wing of libertarianism; John Hospers, the first Libertarian Party presidential candidate, dissented from the anti-interventionist party line. But as the ascension of the pro-life Pauls has made libertarianism an important insurgent faction within the Republican Party, their dovishness has become more and more central to their message.

The 2016 GOP presidential primary is poised to become a serious argument about the role of American power in the world—Rubio vs. Paul, activism vs. neutralism. To his credit, Paul has clearly been trying to present his worldview as an Israel-friendly non-interventionism (a departure from his father’s style); in his CPAC speech, he ripped into the policy of sending aid to Egypt while the Muslim Brotherhood espouses “death to Israel.” (Paul opposes aid to Israel, but has said he would cut off the money to Israel’s enemies first.)

While AIPAC and the rest of the pro-Israel community should be worried about the Democrats, they can rest easy that the Republican Party isn’t turning away from the Jewish state. Beyond that, the future of Republican foreign policy, like Republican domestic policy, is very much in play.