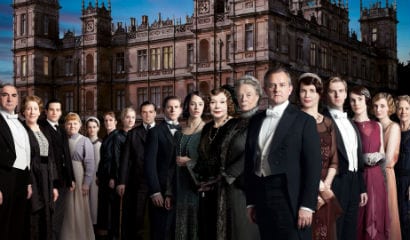 A few words first about Downton Abbey. I’ll assume that its upstairs/downstairs formula is familiar to readers. One of the BBC show’s great merits is that its creator, Julian Fellowes, does not indulge in class war. Lord Grantham is “probably the most positively portrayed character,” according to Truby’s Writers Studio—a site that gives advice to screenwriters. “Further, all the aristocrats have their personal flaws, as all well-written characters do, but they are essentially good and decent people. Far more surprising, though, is that Fellowes depicts their exercise of power in a positive light.”

The lord’s reactionary butler, Carson, who makes me feel like a liberal, is someone we side with, and is so well rendered that it’s hard to see how the actor (Jim Carter) can ever play anyone else. The only villainous character is downstairs—a lady’s maid called O’Brien (Siobhan Finneran). I gather she won’t be back for the fourth season.

A brief Internet search suggests that the American commentary on Downton has been more intelligent than the British. Some Brits seem so resentful of their fabled class system that they just can’t stop hating it, even if the nation itself has, as they say, moved on.

What about us? Does America have a class system? Increasingly, yes it does. But it’s not hereditary, as the British system was and to some extent still is. (The royal family is its most important relic. Hereditary peers in the House of Lords are dying out and being replaced by life peers chosen by the prime minister. Their descendants do not inherit titles.) I’ll say more about our new class system later.

As for Britain’s hereditary system, capitalism overwhelmed it. Sir Henry Maine famously pointed out that in earlier centuries, status, in Britain and then across Europe, was replaced by contract—that is, by free markets.

Neither formal status nor class separation ever took root in the U.S., except in the shameful case of slavery. The free market system prevailed more fully and rapidly here than in any other country. That is why we have been in the economic vanguard.

But in recent decades, both here and in Europe, the intelligentsia have worked hard to restore a non-hereditary form of status and to marginalize free markets. That is the world we live in today. We have a ruling class that despises the free market and does all in its power to restrict its scope. Markets are resented because they leach power from the intelligentsia, who can’t decree what can be sold, nor the price. (With government price controls they can, and that is always destructive.)

IN THE OLD SYSTEM, as in Downton, the classes were formally separate, but they mingled in a way that is rare in our world. Lady Mary’s maid both helped her get dressed and gossipped with her. Ditto the lord and his valet. “Status” divided them, but they knew one another as individuals. Today, in Washington, D.C., there is a neighborhood called Anacostia. I have little idea what goes on there, even though it’s less than 10 miles away. And I’m not eager to find out, frankly. If someone gave me a bodyguard and a per-diem fee, I might take a look.

The truth is that classes in the U.S. today are separated not by a staircase, but by a canyon (or in the case of Anacostia, a river), and that applies to other major cities with dangerous hinterlands, too: Philadelphia, Chicago, Los Angeles, and no doubt half a dozen others.

In these pages a few years ago, Angelo Codevilla gave us a lengthy analysis of “America’s Ruling Class” (TAS, July/August 2010). The major parties aspired to merge into a governing class, he said: “Republican and Democratic office holders and their retinues show a similar presumption to dominate and fewer differences in tastes, habits, opinions, and sources of income among one another than between both and the rest of the country. They think, look, and act as a class.”

Their tastes amount to “a social canon of judgments about good and evil, complete with secular sacred history, sins (against minorities and the environment), and saints.” They seek to impose a unified orthodoxy about man’s origins and American history. They either insist on the need to expand government or fail to resist its expansion.

The ruling class also supports and is supported by a “client underclass” which receives lavish government benefits and votes reliably Democratic. It is opposed by what Codevilla called the country class, and might now be called the Tea Party.

Charles Murray in Coming Apart (2012) took all this a step further. As William Tucker wrote in “The Coming Cultural Disintegration” (TAS, April 2012): “[T]he social disintegration that once seemed to apply only to African Americans has now engulfed blue-collar, white working-class communities as well. Men are dropping out of the workforce, single motherhood has risen to nearly 50 percent, crime has skyrocketed, religious faith is declining, and the chances for upward mobility are rapidly diminishing.”

The cohesion of the white working class is now so low, Murray wrote, that its ability to socialize the next generation is in doubt. He noted the growing social and geographical divide and told an interviewer (Marvin Olasky of World) that if you live in upper-middle-class neighborhoods, you are particularly isolated. “You really don’t have a good idea of what it’s like to be the son or daughter of a truck driver.”

The upper middle class is in better shape. Marriage is the key divider. Fifty years ago we were “pretty much one nation across classes,” Murray wrote. Since then, divorce in the upper middle class has declined, but among the 30- to 49-year-olds in the white working class, “we’re down to 48 percent married.” The latest figures show that 48 percent of all first births are to unmarried women. Today’s ruling class won’t preach what it practices, but confines itself to “ecumenical niceness,” says Murray. But niceness is ignored, and “we now have two cultures.” Call them classes.

WORSE, THE BREAKUP of families has not been discouraged. The fragments of what should have been families need support because children often lack fathers, and today even mothers may be absent. The ruling class doesn’t seem to mind that. It has always depended on a massive state with growing powers of coercion, and a government with an urgent task on its hands is one that will be difficult to shrink.

Incidentally, claiming that unintended outcomes may really be intended, or anticipated but winked at, is today called a “conspiracy theory.” An interesting analysis of the derogatory way the term “conspiracy theory” is now used was made recently by economist Gary North. It is acceptable to attribute political action to “special interest groups,” he points out, but only as long as the motive is profit. But if one argues that “economic self-interest is secondary, and that religious, ideological, or family connection interests are at the bottom of the special-interest group, the theory is automatically dismissed as crackpot.”

Another way of looking at the ongoing destruction of marriage in the working classes is to say that the prolonged anti-Christian campaign, conducted all over the Western world, is finally bearing its rotten fruit. The push for “gay marriage” has the same anti-religious agenda. It’s significant that the New York Times and other media show no sign of alarm about the collapse of working-class marriage. They inveigh against “teen pregnancy,” which has declined, but say nothing about soaring out-of-wedlock births.

If abortion is their unholy sacrament, out-of-wedlock childbearing is their consolation prize. When was the last time you heard a leftist urge the working class to get married before having children? I am tempted to offer a reward to the first person who can find such an appeal.

We live in a world where the top half of income earners pay 98 percent of the taxes while the bottom half pay 2 percent. Nonetheless, “inequality” remains the war cry of our resentment brigades. (It’s true, I’ll concede, that after the collapse of 2008, bankers were rescued when they should not have been, and no bank should be too big to fail.)

But the crucial point is that prescriptions for redress—more regulations, higher tax rates, ever more income redistribution—will only make it harder for the lower classes to raise themselves up if they are not already on the jobs ladder.

Think of a ladder whose the lower rung is too far off the ground. Making that big step up may well entail losing your state benefits. Therefore it is rationally discouraged. Why get up and go to work when you can earn more by staying home? As argued in these pages last month, the black overclass, the Congressional Black Caucus, and the NAACP work against the interest of poor blacks by supporting a higher minimum wage. In so doing they resemble true-blue ruling-class members.

The old class system as seen at Downton Abbey had its unjust aspects (privilege shouldn’t accompany “birth,” for example), and the market system that replaced it was far more productive. But the old system had its merits. It lasted so long that it was obviously stable. Our own new class system, with its anti-religious overtones and with the institution of marriage teetering, is likely to prove unstable. And once the wobbly, less-than-free market that sustains it begins to topple, there will be hell to pay.