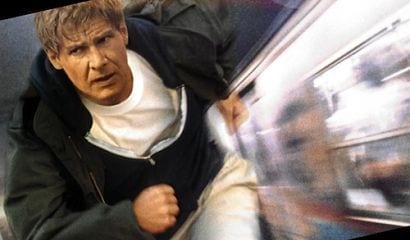 There’s a scene in the 1993 film, The Fugitive, in which Harrison Ford outruns a derailed locomotive in order to avoid being killed. In the real world, of course, he would have been crushed like a bug. Thus, one is required to suspend one’s disbelief in order to enjoy it. But it was, after all, fiction. In this respect, it has much in common with the response of many progressive pundits to the following observation made by Senator Max Baucus last week about the implementation of Obamacare: “I just see a huge train wreck coming down.”

As I pointed out last week, some advocates of Obamacare have faced the reality that the blame for this train wreck lies with a disengaged President and his incompetent minions at the Department of Health and Human Services (HHS). Most, however, have fallen in with the Democrat party line that the implementation debacle is actually the fault of those wicked Republicans. Conspicuous among the blame-the-GOP crowd has been the Washington Post’s wunderkind, Ezra Klein, who says it’s all a dastardly plot orchestrated by the evil geniuses of the GOP.

Klein, who has been telling us for years that the Republican Party consists primarily of semi-literate morons, now writes that these same knuckle-draggers have conceived a diabolically effective conspiracy for thwarting Obamacare’s implementation. Moreover, apparently spotting a well-concealed GOP talent for public relations, he goes on to claim Republicans have also concocted an ingenious cover story for their nefarious doings: “[S]tep one: Create problems for Obamacare. Step two: Blame Obamacare for the problems. Step 3: Political profit!”

The “problems” the Republicans have created involve their insistence on exercising their constitutionally mandated congressional authority over federal fiscal matters, including the funding of Obamacare. Because the “Affordable Care Act” is not very affordable, they have declined to provide all the funding HHS has demanded to implement this budget vampire. Congress hasn’t cut off the money. It has simply recognized obvious budgetary constraints and refused to fund it as lavishly as the law’s misguided supporters would like.

As to “Step two,” one difficulty with Klein’s postmodern fiction is that not all of the finger-pointing is coming from Republicans. Congressional Democrats, notably Senators Jay Rockefeller and Maria Cantwell, are becoming less and less patient with the incompetence of HHS. Nor has the all of the criticism coming from beyond the Beltway emanated from GOP-friendly groups. Last Tuesday, the International President of the United Union of Roofers, Waterproofers and Allied Workers called for “repeal or complete reform of the Affordable Care Act …”

Senator Baucus is, of course, also a Democrat. Moreover, he and his staff all but wrote the law. This irony was not lost on Kansas Congessman Mike Pompeo, who wrote to Baucus last Thursday as follows:

I was stunned, and also saddened, to read of your complaint that Health and Human Services Secretary Kathleen Sebelius is doing an insufficient job informing the public about the Patient Protection and Affordable Care Act (PPACA), otherwise known as Obamacare. My shock wasn’t because I disagreed… I was shocked because you wrote this bill.

Pompeo’s letter goes on to say, “Unlike you, the American people have opposed this law from the moment it was first introduced in Congress.” At that time, of course, Baucus and his fellow Democrats routinely sneered at the public’s “ignorance.” Pompeo wraps up his point thus:

No one in the country bears more responsibility for the complexity of this law than you. When your supermajority couldn’t pass the bill using normal procedures, you and your Senate colleagues rammed through the final legislation by using parliamentary gimmickry.

Representative Pompeo may be wrong in one respect, however. An equal share of the blame for Obamacare can be laid at the feet of media lickspittles like Ezra Klein, who have consistently lied to the public about the law’s complexity as well as its costs. Via Klein’s now defunct listserv, Journolist, they coordinated their propaganda efforts and contrived to suppress inconvenient facts about the “parliamentary gimmickry” they knew would make the voters even more suspicious of Democrat motives than they already were.

Indeed, despite the outing of Journolist and being caught on tape in other venues crafting their “reporting” to fit the Democrat party line, most of the establishment “news” media continue to give the public the mushroom treatment on Obamacare. As Brent Bozell of the Media Research Center phrased it a couple of weeks ago, the major broadcast networks are even now “deliberately censoring news and information from the American people” that might shine an unflattering light on the Affordable Care Act.

Some members of the GOP have attempted to breach the wall of propaganda by asking inconvenient questions about implementation. During the same hearing in which Baucus made his ironic observation, Senator Orrin Hatch confronted HHS Secretary Kathleen Sebelius thus: “A quick review of the HHS budget in brief seems to suggest that you are diverting funds from other areas of the department to put toward implementation.… Would you describe the authority under which you believe you have the ability to conduct such transfers …?

Commissar Sebelius responded with the usual bureaucratic gibberish, but the essence of her comments was that she is using the broad discretionary powers granted to her by Obamacare so she can rob Peter to pay Paul, the former being a taxpayer and the latter being a potential Democrat voter. Which has, of course, been the point all along. This is why implementation has never been a priority for the President, his HHS Secretary or any of their thousands of minions “working” in their elephantine government bureaucracies.

In reality, the Democrats have won virtually every legislative and most of the court battles since the health reform debate began. No honest observer possessed of an IQ exceeding single digits can possibly suspend disbelief enough to take seriously the claim that anyone else is to blame for the resultant train wreck. The Democrats, the White House, and their media accomplices insisted on driving this thing. Now they have run it off the rails. If this movie is to end with any semblance of verisimilitude, they will be crushed like bugs in the 2014 midterms.