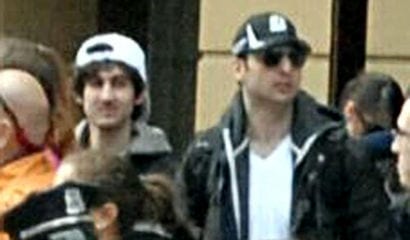 Since the Boston Marathon bombings a week ago, the FBI, the Boston Police, and the media have spent most of their time digging into what happened. We know a lot more than we did a week ago, and some facts stand out. One of those facts is the flood of useless and possibly harmful speculation by the media. Another is the series of anomalies in the incident and its aftermath.

We know that Tamerlan and Dzhokhar Tsarnaev were brothers, of Chechen extraction, and Muslims. On the basis of circumstantial evidence, such as their pictures being on one or more surveillance videos placing them at the scene with backpacks that could have been the bombs, their arrest was sought beginning about five p.m. Thursday. But there was a lot more.

On late Thursday night, they came upon an MIT campus policeman and shot him to death for no apparent reason. Later that night, the two carjacked a Mercedes SUV and reportedly told the kidnapped driver that they were the bombers. Still later, being chased by police, the two opened fire, engaging police in an extended gunfight in which the elder brother, Tamerlan, was killed. The younger man, Dzhokhar, escaped. He was captured Friday evening, hiding in a boat in the yard of a Watertown resident.

We also know that Tamerlan Tsarnev spent six months in Russia last year from about January to July. What he did there we don’t know. He may have gotten terrorist training but we don’t have evidence of it. Tamerlan’s uncle is saying publicly that he had changed, become radicalized in Islam in that period abroad. We don’t know why he was allowed to return to the U.S. after such suspicious travel.

What we do know is that at about the same time he was abroad, his younger brother became a U.S. citizen after ten years of residency. The older brother was a permanent legal resident.

Among the other important things we don’t know are the details of the Russian 2011 warning to our government that the Tsarnaev brothers were Islamic radicals. The FBI interviewed both of them in 2011 and didn’t find enough to cause further investigation. The younger Tsarnaev, according to the Moscow Times, posted on Russian social media that his world view was “Islam.” That, and his brother’s trip to Russia — and wherever else he went — is all we know relative to their motive.

And then there are the anomalies. The first and largest is the apparent lack of any connection between the brothers and any terrorist group. The fact that no one claimed responsibility for the bombings is a strong indication that the two were acting alone. Balancing that — and possibly outweighing it greatly — is the possibility that they were members of a larger terrorist cell that is planning other operations. It has to be one or the other: either they were alone or they are part of a larger operation that the terrorists choose to hide.

From the moment the bombings were reported, the airwaves and the Internet were flooded with misleading speculation. We were told there was a third bomb at the JFK library, which turned out to be a fire. And countless descriptions of the bombers were offered.

We were told that the Tsarnaevs’ mother had worked in a beauty salon and that a woman who had gotten facials from her there said the sons weren’t Chechen separatists. We were told that one of the men’s uncles said they were a “couple of losers,” which is just as valuable as the facially treated lady’s opinions on the connection to one part of Islamic terrorism.

Why is the media inflicting this garbage on us? Because they have to feed the beast. News is a devouring monster that has to be fed every minute. But we don’t — and shouldn’t — have to listen. Even a lot of experts joined in. They were seen commenting, minute by minute, on facts they were assuming, not reporting on. (The circle of experts with which I was conferring was debating — not concluding — the significance of the parallels with a well-known al Qaeda modus operandi.)

The bombers were — according to some media — accompanied by at-large suicide bombers. At the same time, we were told, they were “lone wolves,” part of al Qaeda, fleeing the country or natives of Boston blending back into the population. Some liberals on the air were praying that the bombers were home-grown white guys. Well they are, I suppose, Caucasians.

It would be a lot better for all concerned if the press simply told the truth and admitted it didn’t know.

Yesterday Boston Police Commissioner Ed Davis said that the brothers had quite a few unused bombs (some of which were thrown at police in the Thursday night shootout) that could have been prepared for other attacks. Reports yesterday morning said that the FBI was pushing hard to find the rest of a 12-member terrorist cell of which the Tsarnaevs were members.

What Ed Davis said raises another anomaly that could mean a large terrorist cell was still on the loose. Were the Tsarnaevs smart enough to build the pressure-cooker bombs used at the Marathon? Despite their uncle’s opinion of them, building such bombs isn’t brain surgery. But the sheer number of devices — we still don’t know how many, but there apparently were quite a few — means that it may have required more than two people to produce them. There were, we know, a bunch of homemade hand grenades used against the police in the big shootout.

All of that may be important, but we have to come back to the fact that no terrorist group has claimed credit for the bombings. No one is out praising the Islamic courage of the Tsarnaevs. To me, that is much more important in determining if there’s a bigger terrorist cell out there than the possibility that they may have needed help in building the bombs.

Since before 9/11 — going back at least to the 1983 Marine Barracks bombing and the 1985 Achille Lauro hijacking — terrorists have always claimed responsibility for their attacks. They crave media attention more than anything else, and for an attack to go unclaimed is so unusual that it has to be of major import. The whole purpose of terrorism is political: to spread fear to any who oppose the terrorists and their ideology. What’s the point of committing terrorism if it’s not an act of political compulsion?

On that basis, we have to judge that it is highly likely that there is no larger, organized terrorist group behind the Boston Marathon bombings. The only alternative is much more alarming.

For a terrorist group to be committing acts such as the Boston Marathon bombings while intentionally staying in the shadows would indicate a change in the terrorists’ strategy and tactics. If they decide to operate without claiming media credit, they will be much more dangerous because they will be much harder to find.

The only thing we can do now is to wait and see if the FBI can find a larger terrorist cell of which the Chechen brothers were a part.

It’s the only thing we can do because we know to a metaphysical certainty that our government will not declare Dzhokhar Tsarnaev an enemy combatant and take him to Gitmo as he should be (which can be done constitutionally and legally) for extended questioning by intelligence experts and trial. It won’t screen immigrants and visitors better than Tamerlan Tsarnaev was screened, even after he had spent time overseas last year on an extended, unexplained visit. We know we won’t ask the tough questions or exclude people who should be excluded on suspicion of connections to radical Islam.

The Fort Hood massacre, during which the murderer shouted “Allah Akbar” repeatedly, was just “workplace violence” according to the Obama administration.

Where we stand is where John Kerry said we should during his abortive 2004 campaign and where both Barack Obama and Eric Holder say we should. Terrorism is a crime for the local police and the FBI, they say, not for national policy to exclude and attack those who would commit terrorist acts against us.

Until these people are out of power, there is no solution. There is only reaction to clear the dead, treat the wounded, and find what perpetrators survive their acts.