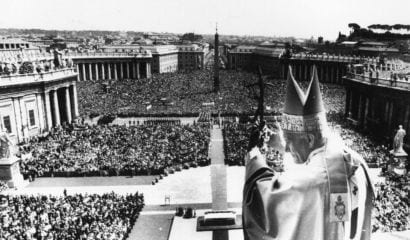 We need to be re-educated in wonder and in the ability to recognize the beauty made manifest in created realities.
—Pope Benedict XVI, Apostolic Exhortation Verbum Domini, September 30, 2010

Pope Francis offered a homily at his inaugural Mass which centered on the need for the Church and its members to take up the vocation of “protector,” inspired by the example of St. Joseph, for all of humanity and for creation:

It means protecting all creation, the beauty of the created world, as the Book of Genesis tells us and as Saint Francis of Assisi showed us. It means respecting each of God’s creatures and respecting the environment in which we live. It means protecting people, showing loving concern for each and every person, especially children, the elderly, those in need, who are often the last we think about. It means caring for one another in our families.… In the end, everything has been entrusted to our protection, and all of us are responsible for it. Be protectors of God’s gifts!

His homily is interesting for several reasons. First, Francis is now the third pope in a row to speak quite explicitly and forcefully on the responsibilities of stewardship for the created word. Second, he focuses both on natural ecology and human or moral ecology equally as did his two immediate predecessors.

Finally, the new Pontiff sees no conflict between protecting creation and the protection of each person. In the conclusion to his homily, Francis, invoking St. Joseph, states, “To protect Jesus with Mary, to protect the whole of creation, to protect each person, especially the poor, to protect ourselves: this is a service that the Bishop of Rome is called to carry out, yet one to which all of us are called, so that the star of hope will shine brightly. Let us protect with love all that God has given us!” He rejects any kind of misanthropic environmentalism while embracing an ethic that seeks to protect both nature for the benefit of people. He is following a line of thought that was first explicitly articulated by Pope John Paul II who proclaimed Saint Francis of Assisi as the patron saint of ecology in 1979.

John Paul II raised the environment in his very first encyclical, Redemptor Hominis (The Redeemer of Man), the same year he designated St. Francis as the patron of ecology. On January 1, 1990, the pope expanded on this theme in his World Day of Peace message in which he noted the lack of due respect for nature, but also a new ecological awareness.

“When man turns his back on the Creator’s plan, he provokes a disorder which has inevitable repercussions on the rest of the created order.” He even went so far as to say that “the ecological crisis is a moral issue” and affirmed the obligation of all men and women to contribute to the restoration of a healthy environment. Recall that the first Polish Pope was an outdoorsman and had lived under a Communist regime that despoiled the environment both in his homeland and throughout the Soviet Empire beyond anything seen in the industrialized West.

This same Pope defended the marketplace in his famous 1991 encyclical, Centisimus Annus (The Hundredth Year). Yet, he acknowledged that “Equally worrying is the ecological question which accompanies the problem of consumerism and which is closely connected to it. In his desire to have and to enjoy rather than to be and to grow, man consumes the resources of the earth and his own life in an excessive and disordered way.” Moreover, this “senseless destruction of the natural environment” is grounded in an “anthropological error” as to the true nature of human beings.

The magisterial Catechism of the Catholic Church (1994), one of John Paul II’s lasting contributions to the Church, discusses “Respect for the integrity of creation” under the Seventh Commandment (“You shall not steal”). The common good requires respect of “the universal destination of goods,” a concept that goes back at least to the Middle Ages, along with the right to private property. The goods of creation are destined for the whole human race:

The seventh commandment enjoins respect for the integrity of creation. Animals, like plants and inanimate beings, are by nature destined for the common good of past, present and future humanity. Use of the mineral, vegetable, and animal resources of the universe cannot be divorced from respect for moral imperative.

Furthermore, “Man’s dominion over inanimate and other living beings granted by the Creator is not absolute; it is limited by concern for the quality of life of his neighbor, including generations to come.”

In his 1995 Encyclical Letter, Evangelium Vitae (The Gospel of Life), the late Pope, who many now call John Paul the Great, addressed many threats to human life and the integrity of the human person. He also affirmed that “…man has specific responsibility towards the environment in which he lives, towards the creation which God has put at the service of his personal dignity, of his life, not only for the present but also for future generations.” He also mentions the need to preserve “‘human ecology’ properly speaking — which finds in the Bible clear and strong ethical direction, leading to a solution which respects the great good of life, of every life…”

John Paul the Great’s immediate successor, Pope Benedict XVI, continued the argument with even more boldness. His many pronouncements on the environment, human development, food production, energy, climate change, and other related issues have been collected by Jacqueline Lindsey into one volume entitled, simply, The Environment (2012).

Benedict shares John Paul’s simultaneous emphasis on the “ecology of nature” and “human” along with “social” ecology citing Centisimus Annus. In his January 1, 2007 Message for the Celebration of the World Day of Peace, he quotes from his predecessor’s encyclical: “Not only has God given the earth to man, who must use it with respect for the original purpose for which it was given to him, but man too is God’s gift to man. He must therefore respect the natural and moral structure with which he has been endowed.”

Benedict was firm on the “supreme worth” of human beings vis-à-vis creation. “Respecting the environment does not mean considering material or animal nature more important than man,” he said in 2008. “Rather, it means not selfishly considering nature to be at the complete disposal of our own interests, for future generations also have the right to reap its benefits and to exhibit toward nature the same responsible freedom that we claim for ourselves.”

In his 2009 Encyclical Letter, Caritas in Veritate (In Charity and Truth), he offers this caution:

When nature, including the human being, is viewed as the result of mere chance or evolutionary determinism, our sense of responsibility wanes. In nature, the believer recognizes the wonderful result of God’s creative activity, which we may use responsibly to satisfy our legitimate needs, material or otherwise, while respecting the intrinsic balance of creation. If this vision is lost, we end up either considering nature an untouchable taboo or, on the contrary, abusing it. Neither attitude is consonant with the Christian vision of nature as the fruit of God’s creation.

The pronouncements of Popes John Paul II, Benedict XVI, and Francis are challenging, even counter-cultural at least for affluent individualists in Western societies. These are not the pronouncements of economists or scientists. They are prophetic words from spiritual leaders, successors to Peter, and trained in theology and philosophy, which inform their reading and interpretation of human nature, Scripture, and Apostolic Tradition. One might argue with this or that prudential judgment by one Pope or the other, but they need to be taken seriously by all men and women of good will who seek to live in Truth.