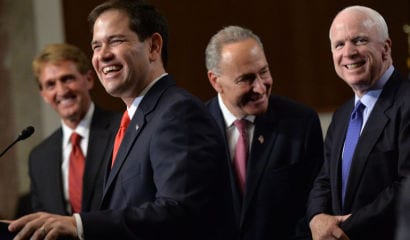 The nation’s dysfunctional immigration laws need reforming. But the Senate bill unveiled last week would explode the number of people on food stamps and Obamacare. Shockingly, the bill also would put left-wing community organizations in charge of educating immigrants about citizenship — a blatant attempt to herd future voters into the Democratic Party. Senators John McCain and Marco Rubio, two Republicans pressing for passage of this bill, haven’t mentioned these shenanigans. Have they even read the bill?

The bill lays out a path for illegal immigrants to become provisional residents this coming year and apply for permanent legal status (a green card) ten years later. Illegals have to go to the “back of the line” behind the 4.5 million people outside the U.S. who applied for green cards and are waiting (Sec. 245C(c)). The line is 19 years long. To clear it in ten years requires doubling the number of legal immigrants admitted to the U.S. each year with green cards.

Expanding legal immigration will push up spending on food stamps, Head Start, housing subsidies, and other benefits legal immigrants are eligible for upon arrival. Though Section 212(a)(4) of the U.S. Code says no immigrant who’s at risk of becoming a “public charge” can get a green card, it is never enforced. Half of green card holders have household incomes below 138% of the federal poverty line, and they’re also largely uninsured.

Insuring these legal newcomers will add $100 billion over the next decade to the ever rising cost of Obamacare. The health law makes legal immigrants eligible for subsidized private health insurance as soon as they arrive. Half of these newcomers will qualify for maximum assistance, costing $9,000 per enrollee, according to the Congressional Budget Office.

Despite this, Senator McCain announced on April 9 that the bill’s authors “do not intend to have the proposals that we are enacting be additional costs to the taxpayers of America.” That’s outrageously untrue.

So is Senator Rubio’s claim that illegal immigrants granted provisional status will “have to be able to support themselves, so they’ll never become a public charge.” The Senate bill does say that, citing the never-enforced section 212(a)(4). But the bill also waives that requirement for anyone who is unemployed, in job training, getting a high school or GED diploma, taking care of a child, younger than 21 or older than 60, or attending college (pp. 99-102). That covers everyone. To stay in this country as a provisional and qualify for a green card in ten years, you need to be working except if you’re not (Sec. 245C(b).

The bill’s authors showed no respect for Congress’s fiscal responsibilites. Funding is provided  for task forces, committees, and new programs. and the authors skirt around  “pay as you go” by calling virtually all funding “emergency” under the Statutory Pay As You Go Act of 2010.

The bill increases resources to secure the border, but also puts agents under the thumb of the Justice Department’s Office of Civil Rights (Sec. 1111,1112, and 1113).

Lawmakers need to read this bill, keep what’s good (awarding more visas based on job skills) and revise the rest to avert huge increases in government spending. We the People are generous and welcoming, but we also have to pay the bills .

And don’t play us for fools. Sections 2106, 2534, 2535, and 2536 put community organizations in charge of educating immigrants about citizenship and American principles. Indoctrination on the merits of a welfare state is more like it. On a smaller scale, this has been going on since 2009. Past grant recipients included One America, a Seattle group that agitates for LGBT and immigrant rights, and Northern Manhattan Coalition for Immigrant Rights, which claims to “build political power through citizenship drives and voter registration.”

The bill increases funding for these groups and also establishes a foundation to funnel private donations to them. Congress should reject this shameful hijacking of citizenship preparation for partisan purposes. The Office of Citizenship (part of Homeland Security) already provides nonpartisan materials to educate immigrants. Its activities are subject to public scrutiny. That’s where the responsibility should stay.