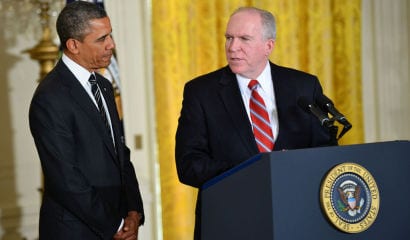 The Obama administration tries to leave the public with the impression that its security failures are due to “incomprehensible” forces. But most of them are easy enough to comprehend, as they follow upon repeated and ignored warnings.

The father of the jihadist who tried to blow up a plane over Detroit in 2009 went to a CIA office in Africa and announced to anyone who cared to listen that his son was a threat to the U.S. No one did.

Major Nidal Hasan, the jihadist who shot up Fort Hood, spared American intelligence even that minor step of dot-connecting. He held public presentations on his hatred of America and sympathy for suicide bombers. The soldiers in the audience politely listened, not wanting to risk demotion or open themselves up to scoldings from their PC overlords. Some of Hasan’s colleagues even thought he had the makings of a thoughtful adviser to the government on Islamic affairs.

Short of a bombing or shooting, it is hard for Islamic warriors to get the attention of an administration that insists it is not at “war with Islam,” and even then no lessons are learned. The horror just becomes an occasion for more “diversity” and “understanding.”

It is almost as if the Obama administration considers security vigilance itself a species of Islamophobia. The casual security on the anniversary of 9/11 at the Benghazi consulate — when others had shut their consulates down — seems to fit with that mindset. An administration that prides itself on better relations with Muslims tends to hesitate before taking any action that would imply the opposite.

ACLU-style Muslim groups have exploited the Obama administration’s Islamophilia to the hilt, demanding and frequently getting changes to security programs out of sensitivity to Islam. According to the mom of the Boston bombers, her oldest son even tried to convert visiting FBI officials to his jihadist Islam, which completes the picture of politically correct haplessness under Obama.

Russia’s warning about Tamerlan Tsarnaev was bound to fall on deaf ears, particularly at a time when administration officials were prone to see Putin as a paranoid Islamophobe for saying that Chechen Muslims favored a worldwide caliphate. Western liberals, recall, were appalled by Putin’s remarks along those lines to a French journalist in 2002. He had suggested to the journalist that those Chechen Muslims over whom she was expressing concern would one day visit her country and other Western ones.

In Obama’s America, chatter about jihad is not a red flag but evidence of enlightenment. According to CIA director John Brennan, jihad is a “legitimate tenet of Islam, meaning to purify oneself or one’s community.” Brennan argues that militancy is merely a modern aberration grafted on to a harmless religion. But Tamerlan Tsarnaev’s very name gives the lie to such delusional spinning. “Tamerlan” is a reference to Tamerlane, the 14th-century conqueror of much of Asia who called himself the “Sword of Islam.” So somehow back then Muslims had the idea that the religion permitted violence. Tamerlane’s concept of jihad allowed him to kill an estimated 17 million people. Then again, he may not have had access to Brennan’s careful scholarship into the term.

According to the Obama’s administration superior understanding of Islam, none of this terrorism should be happening. That is why they call these acts “incomprehensible” and “tragic.” They use the language of passivity to divert attention from their refusal to engage known and preventable jihadism.

After the Fort Hood shooting, one of Obama’s top generals, General George Casey, went on television and said that the loss of “diversity” would constitute a greater tragedy than the shooting. That summed up the Islamophilia-over-security stance of the administration perfectly.

Its plea for Americans to “understand” Islam is nothing more than a demand that they misunderstand it: close your eyes to its dangers and then accept terrorism from time to time as an acceptable price for maintaining that enlightened posture. Many government officials who don’t hew to this line have found themselves on the margins or out of a job.

Homeland Security’s “If you see something, say something” campaign is a little late in Obama’s America, where mindless multiculturalism teaches people to avert their gaze from the evil in cultures. The unofficial slogan of this profoundly unserious administration is more like a paraphrased Disney jingle: if you have nothing nice to say about Islam, say and see nothing at all.