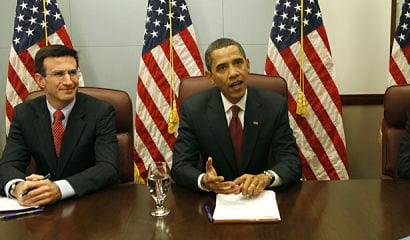 If a government actuary conducts an analysis but the committee that is supposed to receive that analysis doesn’t exist, does the analysis make a sound?

The only problem is that IPAB doesn’t yet exist.

That probably won’t be the only deadline IPAB will miss.

If IPAB has to develop a proposal to reduce Medicare’s expenditures, it must submit a draft of that proposal to the Secretary of Health and Human Services by September 1 of this year. It then must submit a final proposal to Congress and the President by January 15, 2014. This process is supposed to be repeated every year under Obamacare.

IPAB is supposed to be composed of 15 members who will each serve six-year terms. They must be nominated by the President and confirmed by the Senate. Since it is nearly May, that leaves only four months to meet the draft proposal deadline. In other words, four months for members to be nominated, for the Senate to hold hearings and confirmation votes, and then for IPAB to put together its proposal. If we assume the Administration is going to forego that deadline and instead shoot for January 15 of next year, that still only leaves just over eight months.

Indeed, if President Obama has decided on his fifteen nominees for IPAB, it is one of the most closely guarded secrets in Washington. Under Obamacare the Speaker of the House, the House Minority Leader, the Senate Majority Leader and the Senate Minority Leader are supposed to each be consulted by the President about three of the IPAB nominees. A spokesman for Speaker John Boehner’s office said that the President has so far not consulted with the Speaker. The other three offices did not return requests for comment.*

President Obama has known that he’d have to nominate the IPAB members since the day Obamacare became law back in March 2010, so what’s taking so long?

One possibility is that it is hard to get good people. For starters, a position on IPAB pays only about $165,000 annually. Granted, most people would love to be paid that much. But some members of IPAB must come from the medical profession, and for people well renowned in the world of medicine, $165,000 a year could easily be a substantial pay cut.

Even worse would be the Senate hearings they would have to endure. Questions about what kinds of services they would cut from Medicare, to what extent are they willing to interfere in the doctor-patient relationship, and whether they’d agree to use IPAB to raise taxes are questions few prospective nominees would want to face. But given the nature of IPAB, they are questions the nominees would almost surely face. (No kidding on the matter of raising taxes; see page six of this superb study by Diane Cohen and Michael F. Cannon.)

Worse still for potential nominees are some of IPAB’s allies. Peter Orszag, formerly Obama’s director of the Office of Management and Budget and health-care policy guru, has taken to the pages of the New Republic to proclaim that “we need to counter the gridlock of our political institutions by making them a bit less democratic.” He then praises IPAB as “the most dramatic example of this idea.” One can imagine how the IPAB nominees will squirm when a Senator asks them, “Do you agree with Mr. Orszag about that?”

Obama is probably hoping that he can avoid such a fiasco by running out the clock. IPAB doesn’t have to produce a proposal to cut spending if Medicare’s projected growth rate doesn’t exceed the target. In 2011 Douglas Elmendorf, head of the Congressional Budget Office, testified that over the next ten years Medicare spending was “projected to remain below the levels at which the IPAB will be required to intervene.” Thus, there is a decent chance the CMS Actuary won’t have to report that Medicare’s growth rate exceeds the target until well after 2016, at which point it will no longer be Obama’s headache.

But even if the day of reckoning comes before Obama’s term is up, the President will not necessarily be caught flat-footed. Failing to put together IPAB is no impediment to devising a proposal to cut Medicare spending. According to the law, if IPAB “is required, but fails, to submit a proposal to Congress and the President by the deadline… the Secretary [of Health and Human Services] shall develop a detailed and specific proposal that satisfies the requirement.” Throughout his presidency Obama has been able to count on Kathleen Sebelius to take one for the team.

Obama may be able to avoid the fiasco of Senate hearings on IPAB or having to defend an IPAB proposal to cut Medicare. What he can’t avoid are the deadlines that are contained in Obamacare and will be missed the longer he demurs. As these deadlines come and go and IPAB is not in place, more and more people will ask if yet another part of Obamacare is unworkable. That can’t be good for the long-term prospects of the law.

Finally, even if Medicare’s growth rate doesn’t exceed the target, IPAB is still required by Obamacare to “submit to Congress an advisory report on matters related to the Medicare program.” The deadline for the first of those reports is January 15, 2014. Here’s betting that deadline will be missed, too.

*CORRECTION: Sen. Minority Leader Mitch McConnell’s office did get back to me and I forgot to change the article before it ran. His spokeswoman said, “While the Leader does not support IPAB, we did receive a letter from the office of presidential personnel recently asking about recommendations to that unaccountable rationing board. I don’t have anything further for you on that at this time, though.” Sorry for the error.

David Catron
Follow Their Stories:
View More
David Catron is a recovering health care consultant and frequent contributor to The American Spectator. You can follow him on Twitter at @Catronicus.
Most Popular
1
Hither and Yon
CNN Wants You to Know That Recession Declarations Are Racist
by Scott McKay