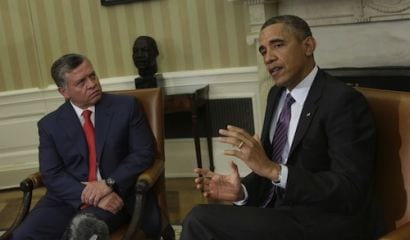 When Boston Marathon bomber Dzhokhar Tsarnaev made the most politically incorrect statement of the year, he accidentally gave some insight into several stories that might not be otherwise connected. Be it the Syrian insurrection, the Benghazi terror attack, or the Boston Marathon bombings, it’s clear that Obama’s “calculus” on terrorism and the Middle East just doesn’t compute the right answer.

Tsarnaev, according to a Washington Post Tuesday story, “has told interrogators that he and his brother were driven by hardline Islamist views and anger over the U.S. wars in Afghanistan and Iraq but had no ties to foreign militant groups, U.S. officials said Tuesday.” What Tsarnaev said is not only politically incorrect, but it’s terribly inconvenient to those like Obama who pretend that we have turned the Islamic world into a playground of friends.

It comes as a shock to some that it’s such a small step from hardline Islamism, and anger over Iraq and Afghanistan, to murder. But it shouldn’t, because there is no aspect of Islamist ideology that is more uncompromising than its requirement to kill or enslave unbelievers. There is no need for other motivations. It’s not a question of American refusal to assimilate strangers. Islamists, to the contrary, refuse to be assimilated.

Which brings us to Syria. It was less than a year ago that President Obama said, “We have been very clear to the Assad regime, but also to other players on the ground, that a red line for us is we start seeing a whole bunch of chemical weapons moving around or being utilized. That would change my calculus.” Now you might say, as Obama’s supporters do, that he wasn’t saying he’d intervene militarily in Syria if chemical weapons were used. You might say, as some neocons do, that it’s long past time to do that, given reports that some eighty thousand Syrians have been killed so far in the insurrection.

Or you might say, as wiser heads do, that Obama’s “red line” was never intended to be enforced, that it is proof that what we say to Iran has no force or effect, and that despite all the carnage, there is still no reason to intervene in Syria.

There are even some who, under some mental delusion, say we should intervene in Assad’s favor. But all of that is unnecessary if we remember one simple fact: there aren’t any good guys in Syria. There’s the murderous Assad regime — which our government declared a terrorist power in 1979 — and a concatenation of Islamist fighters who make up the Syrian Free Forces. To back either one is just nuts.

The credibility of American policy is at stake here. The lesson is not that we have to intervene in Syria to retain that credibility. Rather it’s that we cannot spend our credibility so unwisely, as we’ve done in Benghazi.

According to a report by five House committees, the intelligence community was the patsy for the Obama administration’s comprehensive failures in the attack on our Benghazi consulate that took four American lives. Though it makes several compelling points, the interim report by the Armed Services, Foreign Affairs, Judiciary. and Oversight and Government Reform committees — and the Permanent Select Committee on Intelligence — shows how hard it’s going to be for Republicans to get to the truth and to get the media’s attention on the incident.

Twice in a hearing last week, Secretary of State Kerry told the House Foreign Affairs Committee that we need to get past the Benghazi incident and move on to “more important things.” And that’s just what the media is prepared to do. It’s being left to bloggers to try to give this story the time and space it deserves.

Consider the following. The House report finds that “Senior State Department officials knew that the threat environment in Benghazi was high and that the Benghazi compound was vulnerable and unable to withstand an attack, yet the Department continued to systematically withdraw security personnel.” It says that repeated requests for more security forces were denied at the highest levels of the State Department.

The report also says that the attacks were not the result of any intelligence community failure to recognize or communicate the threat. And we already know what the report says next, that the Obama administration spun an utterly false narrative that an obscure anti-Islam video was responsible for the attacks.

What we didn’t know is that according to the report, “Senior Administration officials knowingly minimized the role played by al-Qa’ida-affiliated entities and other associated groups in the attacks, and decided to exclude from the discussion the previous attempts by extremists to attack U.S. persons or facilities in Libya.”

And there’s more. We intuited, but didn’t have on the record, that “Administration officials crafted and continued to rely on incomplete and misleading talking points. Specifically, after a White House Deputies Meeting on Saturday, September 15, 2012, the Administration altered the talking points to remove references to the likely participation of Islamic extremists in the attacks. The Administration also removed references to the threat of extremists linked to al-Qaida in Benghazi and eastern Libya, including information about at least five other attacks against foreign interests in Benghazi. Senior State Department officials requested — and the White House approved — that the details of the threats, specifics of the previous attacks, and previous warnings be removed to insulate the Department from criticism that it ignored the threat environment in Benghazi.”

There’s a lot more in the report. But it won’t get media coverage, except here. Maybe it’s because the House report doesn’t draw the right political conclusions that it’s being largely ignored.

Those conclusions aren’t hard to derive. The first is that the Obama administration was more worried about the perceived success of Obama’s military intervention in Libya than it was about risking American lives. It was entirely afraid that having more security people in Benghazi would prove that the mission in Libya had failed. If we have to have so many security people there, how can we say that Libya is hopping along the road to democracy?

It’s even easier to derive the fact that the intelligence community was the patsy for this mess. How else to read, “Administration officials crafted and continued to rely on incomplete and misleading talking points. Specifically, after a White House Deputies Meeting on Saturday, September 15, 2012, the Administration altered the talking points to remove references to the likely participation of Islamic extremists in the attacks”?

It’s awfully nice of the Republicans to make these arguments. But it would be a lot nicer for them to draw the hard-nosed political conclusions that these arguments require.