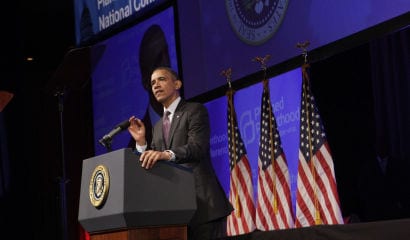 I remember being a teenager, growing up on the coast of Maine, and having heated conversations with friends about abortion. At some point in the discussion, I would be tossed a line that went something like: “You really don’t care about women. You and people like you don’t do anything for them.” My face would get red; I would sputter a bit, not knowing what to say (a common reaction for a teenage boy, the others being either sullenness or showy exasperation).

My friend would continue: “Pro-choice people set up all these clinics and help women. They give them free medical services. You guys just want pregnant women who have no money to keep their babies and then suffer.” Cue confusion on my part, bereft as I was of data or statistics.

Fast forward to today, or rather this past weekend. President Obama gave a speech to Planned Parenthood, the first time any American president has done so. It was a forceful, even emotional speech for our national leader; indeed, few causes seem to raise his ardor more than defending abortion. As I later read the speech, I found myself taken back to my old debates, for President Obama made the very argument cited above in his address:

For many, Planned Parenthood is their primary source of health care — not just for contraceptive care, but for lifesaving preventive care, like cancer screenings and health counseling.

There is a line here that stopped me cold in my tracks: “you’re on your own.” In President Obama’s view, pro-life politicians who wish to defund Planned Parenthood (PP) are working tirelessly to “shut women out” from health care. That’s the president’s argument at its core: pro-lifers want to abandon needy women.

This is the old school-yard argument, and it’s pretty clear that it’s not just politicians in the crosshairs here. Political leaders, after all, are officials elected by the populace. If pro-life, they’re ostensibly supported by common citizens, people like you and me. So that’s the charge. You and I, along with our political leaders, are enthused about telling women in great need: “you’re on your own.” We don’t care about these women.

THIS LINE OF ARGUMENT, as should be obvious, is cruel and misleading.

It is also severely wanting in statistical reinforcement. Consider the data on institutional resources pro-lifers now offer to needy women, which tell us the polar opposite of the president’s claim. Pro-life Americans have started anywhere from 2,500-4,000 Crisis Pregnancy Centers (CPCs) in America (the Weekly Standard says 2,300, the New York Times says 2,500, and the National Abortion Federation says 4,000). We’ll say, for our purposes, there are 3,000 CPCs. These are funded primarily by states and by pro-life groups and individuals.

What does this brief statistical sweep show? Simply this: There are roughly 3,000 CPCs and around 1,500 PP clinics. In point of fact, then, pro-life people care to a tremendous degree for women, especially in a relative sense. Working often at the grassroots level, pro-lifers have created twice the number of care-oriented clinics as pro-choice advocates.

Some CPCs, we note, do not provide an extensive array of medical treatments, but rather exist to help women find appropriate medical care and assistance as their pregnancy develops. Though not every CPC is a full-fledged medical facility, however, this does not obviate the fact that these clinics are aimed squarely at helping pregnant women find the holistic care and resources they need as mothers. The PP side of things — represented by President Obama’s remarks — defines “health care” with exquisite narrowness. “Health care” in his hands seems to mean only technical medical work, which takes the abundant spiritual, moral, and psychological care of CPCs off the table.

I have seen this holistic brand of care firsthand in my limited involvement with the Speak for the Unborn ministry in Louisville, Kentucky, which works closely with A Woman’s Choice Resource Center and Necole’s Place to aid both pregnant women and mothers who need help post-pregnancy. CPCs like A Woman’s Choice and the staff and many volunteers connected with them offer multi-faceted help to women in crisis situations, whether this means connecting a struggling woman with a counselor, a couple wanting to adopt, or a church or organization that is able to help them and donate funds for medical care. (This is to say nothing, by the way, of the consequential spiritual, practical, and economic work that countless churches and religious groups carry out in ministering to post-partum women in troubled circumstances). All this despite minimal federal investment.

This doesn’t mean our current federal administration has no stake in this discussion. We have reached the morally unthinkable position of living under a president who has nothing but silence to offer infants who fight for life after failed abortions. The government, led by our President, works hard to provide PP arenas and funding for women to destroy their babies, whether in Kermit Gosnell’s house of horrors or shiny-and-clean facilities with smiling attendants.

By contrast, CPCs and the evangelicals, Catholics, and friends of various worldviews who staff them show love to women in ways that cost them considerably. If one also takes into account the surging adoption culture among evangelicals—notwithstanding the rather rough-handed Mother Jones essay decrying, distastefully, “orphan fever”—it becomes apparent that on a variety of fronts, the pro-life side is investing tremendous resources in caring for women, the needy, and the least among us.

On paper and on the pavement, then, President Obama’s remarks in his PP speech do not stand up well to scrutiny.

WHAT DOES ALL THIS MEAN for pro-life people as we engage pro-choice advocates?

First, I do not consider my Maine friends or President Obama to be my enemy. I tremble for them, and hope they will see that there is a greater enemy at work in our world, a spiritual one.

Second, I do not present these statistics triumphantly, but with simultaneous sadness and thankfulness. I am sad because our government is aiming with great intensity at the killing of babies; I am thankful that there are many American citizens who are standing resolutely against the same.

Third, I take solace in my Christianity and am reminded of when King Herod tried to offer the baby Jesus imperial “health care options” that would mean his death. Thousands of infants perished because of this destructive vision (Matthew 2:16). Many who are pro-life find world-transcending motivation in the story of Jesus to keep championing the cause of the unborn. Whether they are Christian or not, though, it should be obvious from a look at actual data that pro-life politicians, leaders, and the broader movement care sacrificially and passionately for women and their children.

Some will argue the opposite. They will pound the podium, and raise the old falsehoods without factual basis, and tell the world that pro-lifers do not care for women. To this point, however, the data and the record is clear: the pro-life side has devoted itself to the needy. It exists for little reason other than to come alongside struggling women and gently but firmly tell them, “You are not on your own.”