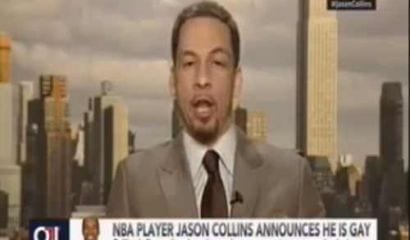 As homosexuals come out of the closet, Christians go into it. “Authenticity” is highly prized in society today, provided that what one feels falls safely within the dictates of political correctness. Sports analyst Chris Broussard stepped briefly outside of the Christian closet on Monday and paid the price for it.

“Personally I don’t believe that you can live an openly homosexual lifestyle or an openly premarital sex [lifestyle] between heterosexuals. If you’re openly living that type of lifestyle, the Bible says you know them by their fruits, it says that’s a sin,” Broussard said on ESPN. “If you’re openly living in unrepentant sin, whatever it may be, not just homosexuality, adultery, fornication, premarital sex between heterosexuals, whatever it may be. I think that’s walking in open rebellion to God and to Jesus Christ.”

ESPN, not long thereafter, apologized for permitting these remarks to disrupt Monday’s canonization: “We regret that a respectful discussion of personal viewpoints became a distraction from today’s news. ESPN is fully committed to diversity and welcomes Jason Collins’ announcement.”

Naturally, a Soviet-style clarification was in order from the guilty party, and Broussard supplied it via Twitter by Monday night: “Today on [ESPN], as part of a larger, wide-ranging discussion on today’s news, I offered my personal opinion as it relates to Christianity, a point of view that I have expressed publicly before. I realize that some people disagree with my opinion and I accept and respect that. As has been the case in the past, my beliefs have not and will not impact my ability to report on the NBA. I believe Jason Collins displayed bravery with his announcement today and I have no objection to him or anyone else playing in the NBA.”

This may not be sufficient. The columnist H.L. Mencken defined American puritanism as the “haunting fear that someone, somewhere is having a good time.” Political correctness, as the new puritanism, harbors the haunting fear that someone, somewhere is holding a Christian thought. Broussard, if he wishes to continue his career in sports journalism, will have to undergo PC-style reparative therapy and adopt a more appropriate level of enthusiasm when future canonizations of homosexual athletes occur.

Unlike his colleagues, he failed to treat the news like a moon landing. It was so important that it warranted a presidential phone call. And he failed to compare Collins to Jackie Robinson. This was “enormous” news, decreed the media.

Except it wasn’t. One detected considerable straining in the accounts as the reporters piled up the qualifiers: Collins is not the first homosexual athlete but the “first active male athlete in a major U.S. professional sports league to come out of the closet,” as the Washington Post put it. Complicating that heavily qualified distinction is that he is not active. He is a free agent who, prior to this announcement, may not have played again. “He’s towards the end of his career and not that good anymore,” said Broussard.

Perhaps Broussard will have to apologize for that judgment too. The media prides itself on the total lack of skepticism when stories like this one break, giving them a Pravda-style rollout. All the propaganda pieces fell into place perfectly, all duly reported by the media: the presidential phone call, a supportive pat on the back from the First Lady, the praise of Kobe Bryant, Bill Clinton, and America’s other moral giants, an adulatory Good Morning America interview.

Broussard spoiled the festivities by bringing up God, whose celebrity continues to dim. The ruminations of rappers and reality stars now count for more than passages from the Bible.

Last week the media informed those perplexed by the FBI’s lax oversight of the Boston bombers that good Americans shouldn’t care what people think, that the FBI was right not to give heightened scrutiny to people who dabble in jihadist thought. But that same media takes a great deal of interest in the thinking of Christians and monitors them very carefully. Christians, unless they change their thoughts, don’t belong in public life, according to America’s ruling class. They are “un-American,” as actor Tom Hanks once put it in an unguarded moment.

Bill O’Reilly is also concerned that “thumping the Bible” somehow lowers our public discourse. Who needs the word of God when we have the tweets of Michelle Obama? From now on, Christian Broussard will be expected to leave his Bible in the closet.