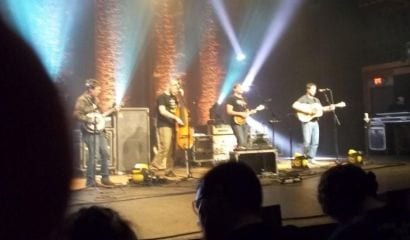 I saw the “Yonder Mountain String Band” (Jeff Austin, Ben Kaufmann, Adam Aijala, Dave Johnston) in Missoula recently and it was a delightful, if musically heterodox experience. I’ve been listening to both recorded and live bluegrass for years, and I was certainly familiar with them, but had never heard them live. What I heard was “Jamgrass,” and it was fun to listen to.

It is nonsense to say that bluegrass music has always been a purist endeavor, as if it was designed in the 1940s by a supreme being named Bill Monroe (“Bluegrass is wonderful. I’m glad I originated it”) and governed by ontological laws. Monroe and his elegantly attired “Bluegrass Boys” were its prime mover, but early on there were doctrinal disputes that led to a reformation of sorts, with Bluegrass Boys alumni Lester Flatt and Earl Scruggs being the first apostates. After the genre’s embrace by the 1950s folk music scene there was no going back. Flatt and Scruggs and their “Foggy Mountain Boys” played the 1960 Newport Folk Festival.

The “High Church” bluegrass aficionado insists on uniformity as to the basic instrument setup of fiddle, mandolin, guitar, banjo, and double bass. Any deviation (two guitars, no fiddle, no banjo, etc.) is heresy. “The Del McCoury Band” sticks to the venerable Bill Monroe formula in its presentation, and is considered by many critics to be the best bluegrass band working in America today. On the other hand, “The Old Crow Medicine Show” sometimes employs two banjo players and a harmonica player from among its talented multi-instrumentalists. “Leftover Salmon” has at various times in a 25-year history used a drummer, as does “Railroad Earth.” “The Alison Brown Quartet” (or occasionally quintet) uses a piano and drummer. The basic divide in the bluegrass world is that the purists believe that the music should be played as originally conceived, that is, by the vocal and instrumental structure passed down by such pioneers as Monroe and Ralph Stanley. Otherwise, it isn’t bluegrass.

Another transition point was when the Grateful Dead’s Jerry Garcia joined a band named “Old and in the Way” as a side project in the early 1970s. Besides his guitar skills, Garcia was a journeyman banjo player who had got his start playing in Bay Area bluegrass bands in the early ’60s. “Old and in the Way” made what many took to be hillbilly music popular with the West Coast hippie crowd.

Also around that time another transition was to “Newgrass,” personified by “New Grass Revival,” founded in 1971. Sam Bush, Bela Fleck, John Cowan, and Pat Flynn were just some of the early members of this now-defunct aggregation, with bluegrass roots and a rock sensibility. Bush, the master mandolinist, founded the band, and still records and performs in his sixties. Fleck is a quirky virtuoso who has gone on to a stellar career working with a plethora of musicians in a variety of genres. Think of him of as the Jimi Hendrix of the five-string banjo. He’s a musical polymath who has melded the bluegrass tradition with jazz, pop, and classical influences.

By the 1980s a proliferation of summertime bluegrass festivals appeared, such as the Telluride Bluegrass Festival in Colorado, Merlefest in North Carolina, and Grand Targhee in Wyoming to name just three. Bill Monroe (once again) started the trend with his summer gathering at Bean Blossom, Indiana in 1967. The festivals have evolved over the years from Monroe’s rickety wooden stage assemblies to elaborate affairs with fastidious rules (no free camping, no coolers, etc.) and pricey tickets. And they are certainly an important aspect of any prominent band’s annual touring schedule.

Like the secession of Austin, Texas (Willie Nelson, Waylon Jennings, et al.) from the dominance of commercial country western Nashville in the 1970s, there has been over the last twenty years another rebellion in the bluegrass world. “Jamgrass” has its roots in Boulder, Colorado.

Boulder has always been a countercultural mecca in the Rockies, partly due to the presence of the University of Colorado. Naropa University is also in town, an alternative school frequented over the years by such Buddhist Beats as Allen Ginsberg and Gary Snyder. Boulder was too far west to be much influenced by Nashville, and since the 1960s its music scene has taken its cue from San Francisco. The Jamgrassers, like the Newgrassers, not only deviate from the standard instruments, but have the temerity to reach into other popular music genres to do arrangements of the likes of Bob Dylan, the Beatles, the Grateful Dead, standard country western tunes and even jazz, reggae, and Cajun. Boulder is a hotbed for this improvisational outlook. But first, ironically enough, there was “Hot Rize,” certainly not a Jamgrass band.

This band (Tim O’Brien, Nick Forster, Pete Wernick, and the late Charles Sawtelle) was founded in Boulder in 1978, and sparked a local bluegrass renaissance. “Hot Rize” still plays reunion shows, and has stuck to the venerable (but no fiddle) formula of playing their compositions and bluegrass standards in traditional ways, especially with tight vocal harmonies reminiscent of the Bluegrass Boys. And they also dress elegantly in the Bill Monroe style, as anyone knows who has seen slices of their 1980s-’90s shows on You Tube. So “Hot Rize” brought bluegrass to Boulder, where it mixed with the countercultural atmosphere and the Garcia-Grateful Dead-Old and in the Way jam-vibe coming from California. The result was a new music scene featuring bands such as “The String Cheese Incident” and “Leftover Salmon,” among others, and playing in a now-legendary venue called the Fox Theater.

Nederland, Colorado is a small town in the mountains just west of Boulder. It’s been a hippie haven over the years, the equivalent of Woodstock, New York (the town, not the infamous rock festival). Woodstock had Bob Dylan and “The Band”; Nederland had Dan Fogelberg and Stephen Stills, the latter plowing his neighbors’ driveways with his Mercedes Benz snowplow, and once, during his wilder days, getting tossed through a window of the Pioneer Inn during a barroom brawl.

Anyway, the Yonder Mountain String Band started out in Nederland fifteen years ago. As I listened to them in Missoula on that recent cold night I could still hear it all. Bill Monroe playing “Muleskinner Blues” with Flatt and Scruggs in a Tennessee roadhouse in 1946; Sam Bush and Bela Fleck reinventing it four decades later. Jerry Garcia and David Grisman jamming in bar in Berkeley in 1974. It was all there. Four guys from Colorado taking a tradition in a new direction and to new audiences, and keeping it alive.