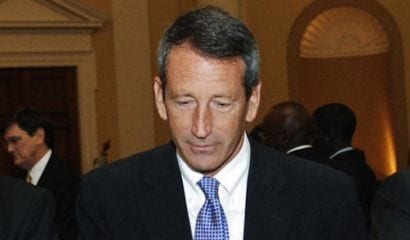 Political writers have established it as a maxim that, in contriving any system of government and fixing the several checks and controls of the constitution, every man ought to be supposed a knave and to have no other end, in all his actions, than private interest.—David Hume, Of the Independence of Parliament, 1742

In the next few days, Republicans in South Carolina will have a choice to make: They can hold their noses and vote Mark Sanford into the U.S. House of Representatives, or they can stand on moral principle and wash their hands of the whole election.

For those of you who take aim at Sanford’s character, or question the judgment of his supporters, I’m hard pressed to blame you. His collapse suggests emotional (if not psychological) damage. A candidate’s grasp on his or her moral compass is understandably important to many voters.

So, I understand if you send your regrets to the political revival. The man lied to his wife, his children, and the people who elected him. Folks are understandably wary to support someone so prone to trespassing against others.

But here’s where I’ll differ with you: I start from the perspective that politicians are hypocritical and dishonest by their very nature. If this (and David Hume above) sounds reasonable, you might endorse the theory of “public choice” — a model of political cynicism constructed by Nobel Laureate James Buchanan as the study of “politics without romance.”

From a public choice standpoint, avowed concern for others’ well-being conceals one’s main motivation — oneself. We’re all driven by incentives. Public choice theory borrows from the economist’s toolbox to explore problems associated with political science. Conventional theorists share one basic assumption regarding the political marketplace: every actor is ultimately motivated by self-interest. This presumption even pertains to you, dear reader, whether you’re a “Tea Party Patriot,”  “Administrative Sponge,” “Upright Politician,” or “Philandering Governor.”

If that next election suddenly hinges on concealing an affair through a bizarre fib set in Appalachia, so it goes.

We idealize a political system wherein voters, politicians, and bureaucrats transcend personal desires, afloat on civic virtue and fidelity to principle. Clearly this isn’t the case. We’re generally parochial in our interests. The landmark 1962 book, The Calculus of Consent, co-authored by Buchanan and Gordon Tullock, discussed the evolution of the political system and the development of social charters as the natural process by which individuals pursue and protect personal interests, rather than “some conception of the ‘public interest.’”

Writing about Sanford at the time of his tearful confession in 2009, Reason contributor Steve Chapman remarked that “voters have more important things to worry about than their leaders’ sex lives.” However, he parsed the difference between a “frisky bachelor lifestyle” and full-on adultery: the former is forgiven, while the latter “connotes a dishonesty at odds with our basic notions of integrity.”

This perspective presumes a lot; namely, that politicians are ever driven by fidelity to their constituents, as opposed to their own self-interest — whether that means maintaining one’s affair, or keeping one’s job.

Around the same time, in these digital pages, TAS contributor Andrew Cline remarked of Sanford’s affair that “in addition to the poorly planned and excused excursion, there was the whole matter of his duty to the people of South Carolina. He fled without a thought of it.”

Again, quoting Buchanan, “public choice, as an inclusive research program, incorporates the presumption that persons do not readily become economic eunuchs when they shift from the market to political participation.” Sounds like the Palmetto State’s former guv met the measure of public choice theory’s emphasis on personal incentive.

Ultimately, we strengthen the constitutional republic envisioned by the Founders by keeping our politicians honest. If we’re inspired by the Framers, and driven by public choice theory, we’ve learned that government action guarantees neither the willingness nor the ability to solve a problem, and it’s our responsibility to remind self-interested politicians that we’re watching. Sometimes, they’ll notice.

Perhaps, we can somehow draw a line between one’s political integrity (as defined by an organized and engaged citizenry that demands accountability) and one’s personal integrity (which likely costs Sanford many a sleepless night).

Ultimately, I believe this emphasis on cynicism explains the public’s disavowal of Mark Sanford’s. Can he be trusted to represent our best interests? If we overcome public choice theory’s emphasis on “rational ignorance,” sterile pragmatism suggests he can.

Clearly, on determinations regarding himself and his moral conduct, he’s failed the proverbial acid-test. However, with regard to policies that effect the public, in his capacity as an elected official, he’s proven beyond reproach.

Perhaps for the sake of our own self-interest, we really ought to give him another chance.