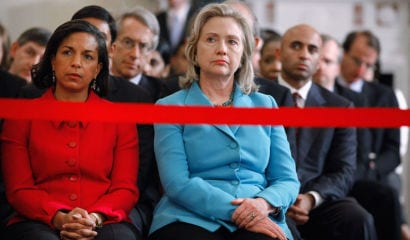 The Benghazi scandal won’t bring down the Obama administration. And it’s too early to decide whether it will sink Hillary Clinton’s presidential bid in 2016. There are plenty of other things quietly waiting to do that.

But that scandal — persistent, patient, and always just around the corner from the White House — just won’t go away.

In just the past few days, we’ve learned a lot. For starters, from Stephen Hayes’s reporting in the Weekly Standard, we learned that the State Department is guilty — and that’s the proper word — of making “heavy substantive revisions” to the CIA talking points that State was supposedly relying on to tell the truth about the September 11, 2012 attack on the American consulate outpost in Benghazi. Hayes says that those changes were part of a “frantic” process that took place in the 24 hours preceding UN Ambassador Susan Rice’s now-infamous appearances on the Sunday talk shows in which she spun the administration’s line that the attack was in reaction to an anti-Islam video that no one had seen.

He also reports that about two hours into the eight-hour-long attack, it was obvious that al Qaeda terrorists were taking part in it. Shortly after that, the State Department was already working to remove those references including those to Ansar al Sharia, an al Qaeda-connected group that had already claimed credit for the attack.

Just yesterday we learned (from a House committee leak) that Greg Hicks, one of the Benghazi whistleblowers, will say in a hearing Wednesday that “I think everybody in the mission thought it was a terrorist attack from the beginning.” That, according to a CBS News report. Hicks is described as a 22-year Foreign Service diplomat who was the highest-ranking U.S. official in Libya after the attack.

Also yesterday, Rep. Jason Chaffetz (R-Utah) said that the Obama administration had literally threatened one or more of the Benghazi whistleblowers and that hospital records had been tampered with to conceal the identity of at least one of the survivors of the attack.

So what is the Obama administration trying to hide? Pretty much everything.

Last week, we learned that the State Department’s Inspector General is investigating the Pickering-Mullen “Accountability Review Board” for, among other things, its failure to investigate and get statements from the Benghazi survivors. Before there were whistleblowers there were survivors, yet the comprehensively misnamed “Accountability Review Board” didn’t question them.

Which isn’t a surprise. The ARB did what it was paid to do: limit the damage and blame people under Hillary Clinton for the failures of leadership and management. It was, simply, a whitewash. We’ll probably wait a long time for the IG to report the facts — 2017 sounds like the right time frame.

In the press conference announcing the report, Adm. Mullen said something that’s been bothering me ever since. He said that no military assets could have been deployed in time. In time to do what?

If you parse Mullen’s words — as we learned we must when Hillary’s hubby was president — he almost certainly meant that the ambassador was killed in the early moments of the attack. Mullen, the good Obama man that he is, didn’t say that there were no military assets that could have been deployed in time to save the two former Navy SEALs who tried to rescue the ambassador.

And that is where Mullen is being dishonest, joining then-Defense Secretary Leon Panetta and several other Obama ranking officials. (Panetta, we must remember, said that we can’t just send forces in without knowing what they’ll be facing.) None of the Obama team was willing to even ask the Libyans for permission to cross their borders. Not that we should have asked, or cared about the answer.

My sources tell me that there were a host of assets that could have been brought to bear. First up could have been a squadron (or more) of F-15s based at Sigonella, Italy. Flying at only about 0.8 Mach, they could have been there in about forty minutes. You don’t leave F-15s on the runway without fuel or armaments. And a few 20mm cannon shells can ruin your day. The fact is that the F-15s possibly could have saved the two SEALs, and they certainly could have filled the consulate’s courtyard with piles of dead terrorists.

The other asset we had at Sigonella, according to my sources, was about one hundred Force Recon Marines. Could they have reached Benghazi in time to rescue the SEALs? It’d take an hour or two to roust them from their bunks and get them on a C-130, ready to parachute in. We’ll never know. But there’s more than enough information to conclude that the F-15s could have.

At the risk of stating the obvious, there should be nothing more that we needed to know other than Americans were under fire. The Obama administration — Hillary herself, Panetta and the president — knew that was so. They did nothing.

Which brings us back to what Greg Hicks and the other whistleblowers will say on Wednesday. Mark Thompson is a deputy coordinator for the State Department’s counterterrorism bureau. Eric Nordstrom is a diplomatic security officer who had cognizance of Libya in the months leading up to the attack.

They may say a lot more than that everyone in the Benghazi mission believed the attack was made by terrorists. And then again, they may not say anything else. They may have been sufficiently intimidated by the State Department to remain silent, or they may not know anything else. Which leaves Republicans right where they were at the end of Romney’s second debate with Candy Crowley (and Obama).

Was it a terrorist attack? Of course it was. Was al Qaeda involved? Ditto.

The Republicans need to answer the “where’s the beef?” question. If they’re going to produce something that the Obama administration will find indigestible, it’s not going to be in the fact that the State Department disapproved requests for more security in Benghazi. And it’s not in the fact that the hospital records were altered.

The facts that are important — and the only ones that the Republicans should focus on — are in the State Department’s massive, misleading revisions to the CIA talking points and in the utter failure of the Obama administration to attempt to rescue Americans under fire.